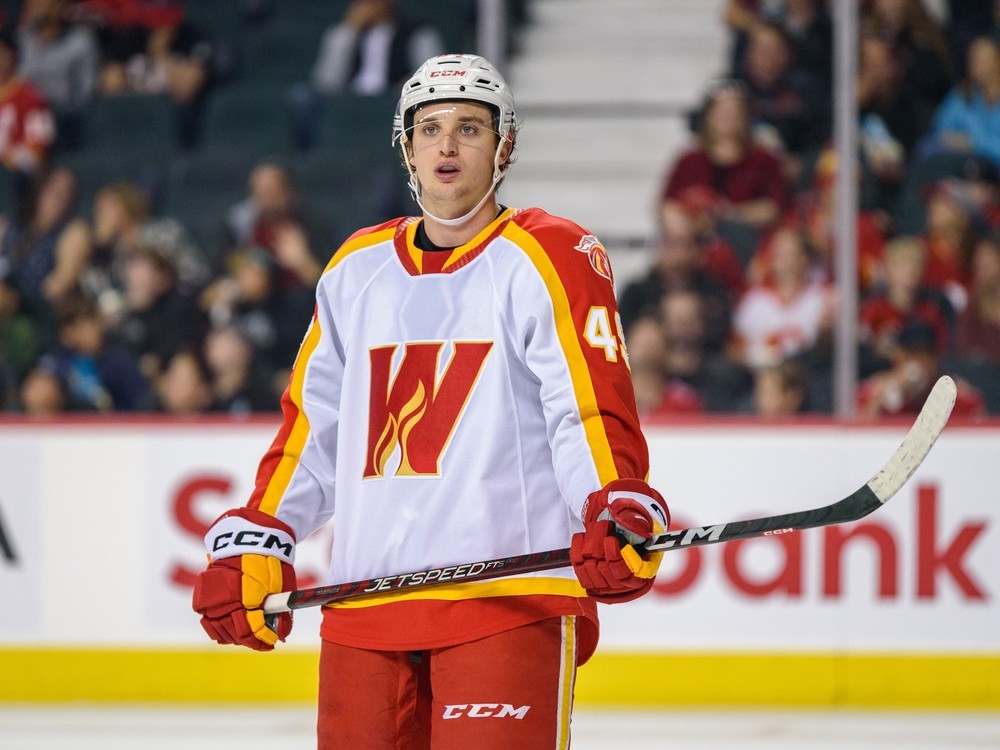 If you’re figuring that Calgary Flames forward call-up Jakob Pelletier must be moping around, his patience wearing thin as he waits to log his NHL debut, well … you don’t know Jakob Pelletier.

“That’s not me. That’s not me at all,” he said, smiling wide and shaking his head in protest. “Each day, to come here and practice, it’s great. Practice, for me, it’s the same. I’m still going to bring the same joy and the same excitement.”

Sign up to receive daily headline news from the Calgary SUN, a division of Postmedia Network Inc.

The next issue of Calgary Sun Headline News will soon be in your inbox.

It’s been only practices for Pelletier in the week-and-a-half since he was promoted from the AHL’s Calgary Wranglers. The 21-year-old left-winger has watched five consecutive games — in Chicago, twice in St. Louis, in Dallas and then in Nashville — as a healthy scratch.

Although the Flames delivered a dud in their road trip finale, it doesn’t sound like Pelletier’s spare status will change for Wednesday’s home date against the reigning Stanley Cup champion Colorado Avalanche (7:30 p.m. MT, Sportsnet West/Sportsnet 960 The Fan). The locals are currently clinging to a wildcard spot, and the Avs are right there in the rearview mirror.

And so, the waiting game continues.

Pelletier has undoubtedly been daydreaming about that solo lap, about his first shift — and eventually, his first snipe — at the NHL level.

But he’s determined to enjoy this big league eye-opener, even if his No. 49 jersey is still collecting dust. In fact, you get a sense he hasn’t stopped beaming since that late-night buzz from Flames general manager Brad Treliving, phoning to tell him to pack his bags for a five-game getaway that concluded with a 2-1-2 record.

Pelletier described his immediate reaction to that news with two words, only one that can be printed in a family newspaper.

That’s been a popular question among the Flames’ faithful, wondering why Pelletier — a first-round selection in the 2019 NHL Draft and a guy who has piled up 96 points in 97 career outings in the AHL — is still stuck spectating. It was a similar story for his minor-league linemate Matthew Phillips, who was limited to two appearances during a stint with the parent club in December.

“I’m just trying to be a sponge here,” Pelletier said. “The big thing is in the AHL, you play less. Here, guys play once every two days or so. Just to watch them bring it each day for practice and games, it’s pretty cool to see.”

So when will see Pelletier? Or will we?

Sutter seems hesitant to tinker with his current top nine cast — understandable given the Flames are 7-3-3 since he settled on those combos. And at 5-foot-10 and 180 lb., this up-and-comer isn’t an ideal fit for the smashmouth style that the boss prefers from his fourth line.

“And that’s part of development,” Sutter stressed Tuesday, referring to Pelletier’s string of sit-outs. “It’s like you tell these guys, you bring ’em up on trips and then they have to watch. Before you can play in the NHL or before you can be successful in the NHL, you have to be around those guys and see what it’s like, pick somebody out and prepare like him and work like him in practice. Don’t think you’re him or don’t think you’re him, I’ll tell you who I think you’re like and go from there.

“The thing with Pelts is always going to be his size. As he gets a little stronger and gets a little more weight, then he’s going to have a better opportunity. That’s what will happen for him, and he can still do that. He’s only 21. In comparison to other players in our organization, they may be maxed out there, but this boy is not.

That energy, that enthusiasm, remains on display.

No complaining while he waits.

“I think they love the positivity that I bring each day,” Pelletier said.

THE CHAMPS ARE HERE
Sutter doesn’t expect the Avalanche to be a factor in the wildcard chase — and that’s no disrespect from the Flames’ skipper.

It’s quite the opposite, actually.

“They’re the defending Stanley Cup champions, and they still have 40 games left or whatever it is,” Sutter reminded. “I would bet on Colorado making the playoffs, and I would bet on them being one of the three in their division.”

The Avalanche, still missing a few key pieces due to injury, are coming off back-to-back blowout wins.
They have improved to 22-17-3, four points back of the Flames but with three games in hand.

“Injuries or not, Colorado is who they are — they’re the defending champs,” said Flames forward Blake Coleman. “They have some really high-end talent and some guys that can beat you. It’s something that we have to be ready for. Sometimes, these first games back from a long road-trip can be a bit of a trap game, and we just have to make sure that we’re prepared the right way.”