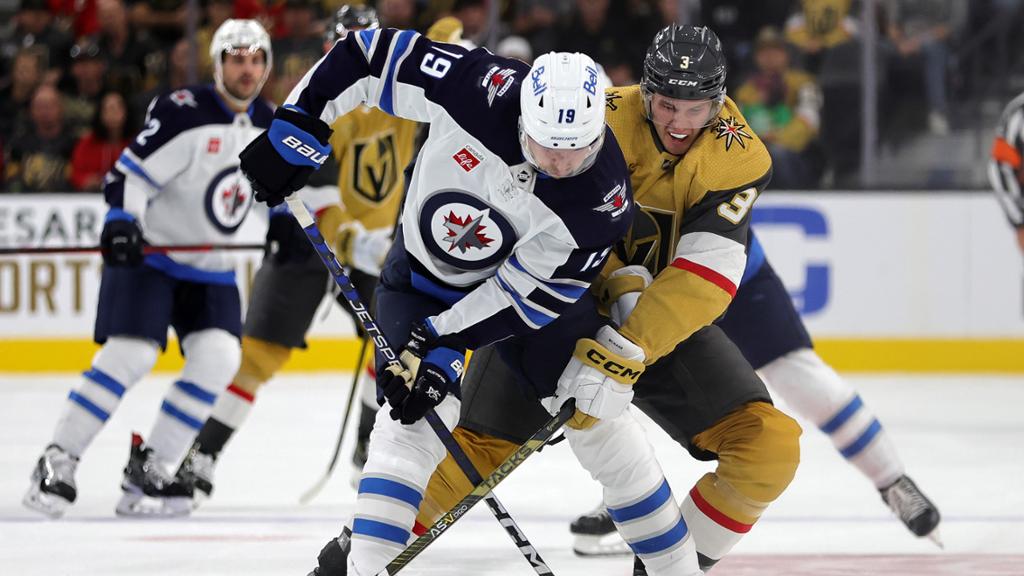 The success the Winnipeg Jets have enjoyed against the Vegas Golden Knights the last few seasons came to a halt on Thursday.

Led by Jack Eichel’s two goals, the Vegas Golden Knights (4-1-0) scored four times in the first period and the Jets couldn’t recover, falling by a score of 5-2. The loss snaps Winnipeg’s five-game win streak against Vegas, and leaves them with two of a possible six points on the three-game road trip.

Despite the pushback in the final 40 minutes, the Jets couldn’t overcome a tough first period, which saw Vegas build a 4-0 lead.

“We had self-inflicted wounds all over the rink,” said Nate Schmidt. “I think we were pretty happy about ourselves last night and didn’t want to come out and play the same way to start the game.”

Pierre-Luc Dubois and Neal Pionk scored for the Jets in the loss, which drops the team’s record to 2-2-0 on the season. It was Pionk’s second consecutive multi-point game after scoring twice in Colorado the night before.

With the Jets on playing on the second consecutive night, David Rittich made his first regular season start, finishing with 27 saves.

“I wasn’t happy with the first period about how we played and how I played, obviously. I’m the most hard person on myself,” said Rittich. “Thank God it was in the beginning of the year, unfortunately it was my first game. But if we’re going to learn from it, we have to play the full 60 minutes, be ready from the start, and be battling and be ready.”

Nikolaj Ehlers didn’t play for the second consecutive game as he continues to deal with a nagging lower-body injury that caused him to miss some practice time during training camp.

The speedy forward didn’t play Wednesday in Colorado either, but the Jets were able to overcome his absence in the line-up and earn an overtime win over the Stanley Cup champions.

On Thursday in Vegas, it was a bit tougher for the Jets to find their legs. It’s not an excuse the team will be using though. They know this is just the first of 12 back-to-backs they’ll face this season.

“We weren’t really ready to go, obviously,” said associate coach Scott Arniel. “Really sloppy hockey. We knew that they knew we played last night and they were going to come out really hard. We didn’t execute in any area.”

For the first time this season, the Jets didn’t get the game’s opening goal. Just under five minutes in, a three-on-one rush for the Golden Knights was punctuated by Jack Eichel’s second of the season – a snap shot from the slot that beat Rittich high on the glove side.

Video: [email protected]: Pionk gets skate on puck at the weak side

Vegas built on the lead with 13:48 remaining in the opening period, as William Karlsson found some open space in the low slot in front of Rittich. Michael Amadio corralled the puck below the goal line and fed Karlsson, who snapped it past the Jets goaltender to make it 2-0.

Then, a bad break for the Jets, as Chandler Stephenson’s pass from the left wing boards went off the skate of Brenden Dillon and past Rittich to make it 3-0.

Eichel added his second of the period in the final minutes of the first to cap off a rough opening period for the Jets.

“You give up one, you can’t go out there and get hemmed in your zone again,” said Schmidt, who had two shots on goal and led all Jets defencemen with 23:13 of ice time.

“It’s on the next group to go out, get it in, and get on the forecheck. I think our forwards, the last two games, when they’ve hung on to pucks down low, it’s been really impressive,” he said. “I love watching them skate. That’s what makes our D able to get pucks through from the point. They give us lots of time.”

Dubois got the Jets on the board 7:23 into the second, when Neal Pionk’s shot was kicked to the left circle by Vegas goaltender Adin Hill, and Dubois smacked it between Hill’s legs to make it 4-1.

Pionk and Cole Perfetti picked up assists on the Dubois marker. Both players had multi-point outings in Colorado on Wednesday, and for Perfetti it’s the first time in his NHL career he’s had points in consecutive games.

Just after the midway mark of the third, Josh Morrissey pinched down the right side boards and sent a pass to the front of the net that banked off the skate of a pinching Pionk and past Hill to cut the Vegas lead to 4-2.

“With Josh and Neal right now, they’ve done a real good job of activating themselves and really adding offence from the back end,” said Schmidt. “We talked about it early in the year. We have to have that. We talked about it between periods, ‘Okay D have to have one here’ as a way to be a catalyst for our offence.”

But that’s as close as the Jets would get, as Jonathan Marchessault scored an empty-netter in the final minute to close out the game.

The Jets now return home for a quick two-game home stand which begins on Saturday night at Canada Life Centre against the Toronto Maple Leafs.

“I believe our group could have come in here and won this game. I really do,” said Schmidt. “We showed that we could. We just have to start on time. That’s what hurts. That’s what hurts after the game is over. You know you played a good 40 minutes, but unfortunately it’s not a 40-minute game.”

While Arniel didn’t provide an update on Ehlers, he expects one to be made on Saturday as the Jets will travel home from Vegas on Friday.

Dylan Samberg also didn’t play on Thursday (Logan Stanley returned to the line-up after sitting out the game against Colorado).

“He’s got a lower-body injury. He got hurt last night. We’re not sure where it was at,” Arniel said of Samberg. “Hopefully, maybe he’ll be back Saturday. We’ll kind of wait and see on him.”