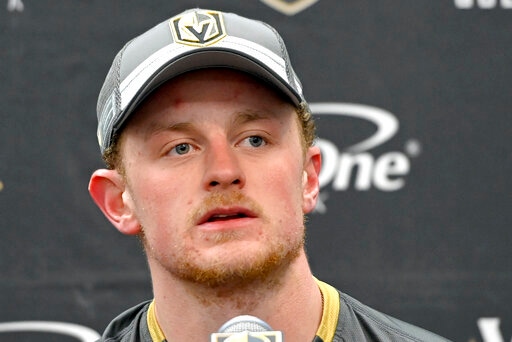 Jack Eichel argued and argued with his former team, and even with the league, for the right to undergo neck surgery that had never before been performed on an NHL player.

The procedure Eichel wanted — the one he expected to get him back on the ice in a fraction of the time over the more-accepted standard of fusion surgery — is called artificial disk replacement and he eventually got it.

Given the success it has brought the talented forward, it could very well be referred to by another name now: The Jack Eichel Surgery.

The sharpshooting center for Vegas by way of Buffalo may be doing for lower backs and necks what Tommy John once did for the elbows of baseball pitchers — save careers.

“A year ago nobody had had it, and now all of a sudden, three guys have had it,” said Eichel, who scored the overtime winner with seven seconds left Sunday as the Golden Knights moved to 8-2 atop the Western Conference. “It’s a more common injury than you think and it’s a good way to resolve that injury, so I’m happy that guys had the opportunity to do it.”

FILE – Vegas Golden Knights center Jack Eichel (9) plays against the Los Angeles Kings in an NHL hockey game Saturday, March 19, 2022, in Las Vegas. Jack Eichel fought for the right to have a never-been-performed-on-an-NHL-player sort of neck surgery. The sharpshooting center for the Golden Knights by way of the Buffalo Sabres may be doing for backs/necks what Tommy John once did for the elbows of baseball pitchers — save careers. (AP Photo/John Locher, File)

This 2022 photo provided by DISC Sports & Spine Center shows boxes of Orthofix M6 artificial discs at the DISC Surgery Center in Newport Beach, Calif. Vegas Golden Knights Jack Eichel fought for the right to have a never-been-performed-on-an-NHL-player sort of neck surgery. The procedure Eichel wanted was one that would get him back on the ice in a fraction of the time and was over the accepted standard of fusion. It was called artificial disk replacement.(Matt Goulding/DISC Sports & Spine Center via AP)

Others are already following his lead. Chicago forward Tyler Johnson underwent the procedure last December, and Philadelphia’s Joel Farabee had it in June.

The road to being a pioneer among his peers wasn’t exactly smooth for Eichel. He switched agents to Pat Brisson in August 2021, and yet the duo was still unable to convince Buffalo team physicians it was safe to insert an artificial disk into Eichel’s neck.

The reason for the reluctance: the question of whether the disk would hold up to the rigors of the league. No NHL player had ever had it before, and the Sabres also were hesitant to risk Eichel’s trade value.

The surgery can put hockey players back in uniform in three months. With fusion surgery, where surgeons permanently connect two or more vertebrae, it can take six months or longer before a return, and could require follow-up procedures later in life.

Eichel did his homework and was insistent the ADR route was what he wanted. Frequently, teams acquiesce, but in this case there was built-up animosity between the two sides in what was an ugly divorce, with the Sabres holding the final say. One reason the NHL Players’ Association didn’t escalate it to a grievance was because the Sabres continued paying Eichel his contract while he was essentially waiting for a trade.

That came a year ago, when Eichel was dealt to Vegas on Nov. 4. Eight days later, he underwent ADR surgery. Three months after that, he skated nearly 18 minutes for the Golden Knights against the eventual Stanley Cup champion Colorado Avalanche.

“I give Jack a lot of credit for being a stubborn student of what he was going to do his body,” Brisson said. “He was patient, and he fought a pretty lengthy battle. He was very strong and paved the way.”

Eichel and Brisson endured mounds of red tape in order to get the surgery, which was performed by Dr. Chad Prusmack in Denver.

“At one point, it wasn’t about hockey. I just wanted him to get the surgery so he could continue to live his life,” Brisson explained. “It’s a personal choice, and that’s where we are with the issue.”

Over his 30-year career, neurological spine surgeon Dr. Robert Bray Jr. has performed many disk surgeries. The founding director of DISC Sports & Spine Center, Bray has helped everyone from that 60-year-old golfer who wants to play with friends to extreme sports standouts like big wave surfer Koa Rothman and now Johnson, who followed the lead of Eichel after years of chronic numbness and pain.

Eichel could become synonymous with ADR much like Tommy John with elbow surgeries. The left-handed pitcher’s career could’ve been over, but John had ulnar collateral ligament (UCL) reconstruction performed by Dr. Frank Jobe in 1974. Since his ground-breaking operation, Tommy John surgery has been overflowing with successful comeback stories ( see: Justin Verlander, who’s pitching for Houston in the World Series ).

Johnson conducted his own research as he watched Eichel’s situation. Johnson’s neck had been bothering him for years, with his offseason workouts all about managing the tingling and sharp pain he’d experience in his arm. He eventually talked to spine specialists about his options.

Last December, he had Bray perform the surgery, which involved a 1-inch incision and less than a teaspoon of blood loss. The outpatient procedure lasted approximately 70 minutes as Bray and his team inserted a titanium disk that bonded to the bone, with the center elastic portion of the disk acting as a shock absorber. The ruptured disk and bone spurs were removed. The implant restored normal joint motion, as opposed to sacrificing motion with a fusion.

Shortly after the procedure, Johnson was already walking around. No more tingling, either.

About eight days after that, he was skating again, with full mobility in his neck soon following. And three months post-operation, he was trying to get teammates to hit him — just to test his neck. No one volunteered.

So he crashed into the boards himself.

“Hard as I could just to test it out,” laughed Johnson. “No ill effects.”

A word of caution: The procedure isn’t for everyone.

“It is a great operation for a lot of different neck related problems, but can’t fix everything,” Dr. Amit Jain, a spine surgeon at Johns Hopkins, wrote in an email. “Even if a player feels great, the decision to let early return to sport or delayed return depends on the surgeon and their protocol.”

Johnson has been asked by players around the league about the procedure and recovery process.

“Obviously, surgery is a scary thing,” Johnson said. “If it gets to a point where you’re wondering, ‘Hey, is it always going to be like this’ — if it’s constantly hurting and it’s getting worse and worse, people should do some research.

“For me, it’s been very, very beneficial.”

Copyright 2022 The Associated Press. All rights reserved. This material may not be published, broadcast, rewritten or redistributed without permission.