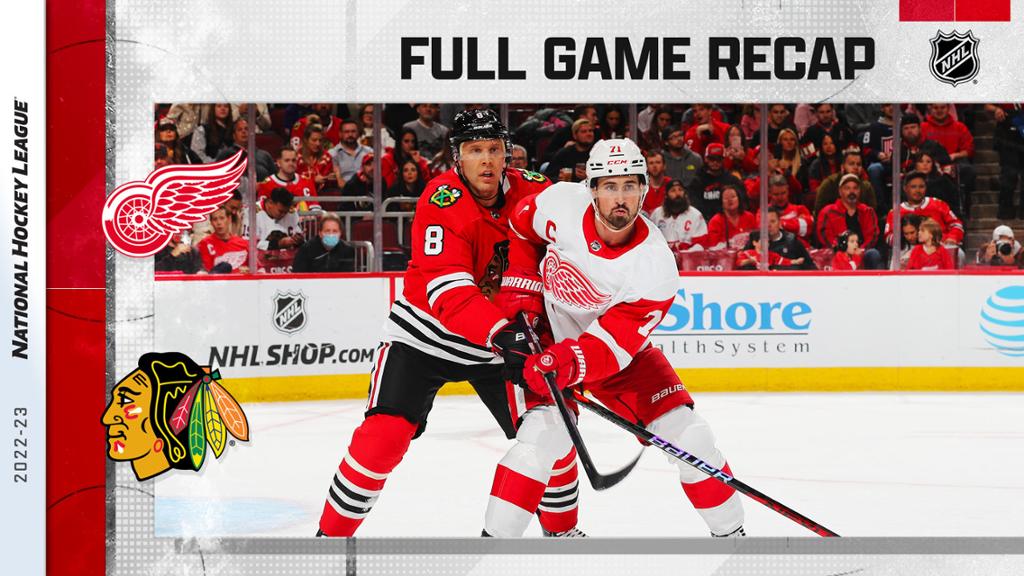 CHICAGO — Max Domi scored 2:16 into overtime, and the Chicago Blackhawks rallied to win 4-3 against the Detroit Red Wings at United Center on Friday.

Domi stole the puck from Red Wings forward Lucas Raymond in the neutral zone and scored over the blocker of Alex Nedeljkovic.

“I’d be lying if I said I saw [Patrick Kane] because if I saw him, I’d probably give him the puck,” Domi said. “No, I don’t know how I picked [it] off there, but [I] saw some open ice and I kind of knew I was going to shoot far side.

“To be honest, [I] had to make sure I had the puck first. You strip the guy, you don’t want to get beat, right? Little bit of a gamble. We’ll take it.”

Andreas Athanasiou scored on a penalty shot, and Sam Lafferty had two assists for the Blackhawks (2-2-0) in their home opener. It was their first game since a 5-2 win at the San Jose Sharks on Oct. 15.

Petr Mrazek allowed three goals on 18 shots before leaving with an undisclosed injury after the second period. He was replaced by Alex Stalock, who made 10 saves.

“[Mrazek] let us know that he wasn’t feeling great,” Chicago coach Luke Richardson said. “He told me he had a small injury at the end of the second period. He knows his body well because he’s had some injuries before. He’s an active goaltender. He gave us a heads-up and said he could finish the period.

“[It’s] early in the season and, the solid goalie that he is, we took the precaution. I just talked to the trainers and the doctor, and I think he’ll have to take tonight to see how it is. Tomorrow we’ll make the call and see how he progresses.”

Dominik Kubalik had a goal and an assist, and Nedeljkovic made 25 saves for the Red Wings (2-0-2), who extended their point streak to four games.

“There’s some will there within our team,” Detroit coach Derek Lalonde said. “We’ll probably look back at that [third] period. Analytically, it might be one of our better periods as far as chances for and chances against. Obviously, the inability to extend our lead, to get that fourth goal, we had a ton of chances. It’s more about not so much extending the lead, but keeping our lead.

“It’s painful. We got exactly what we deserved in the third.”

Pius Suter gave the Red Wings a 1-0 lead at 9:26 of the first period when Robert Hagg‘s point shot went in off his skate.

Dylan Larkin extended it to 2-0 on the power play at 10:33, scoring from above the circles with Oskar Sundqvist providing a screen.

Athanasiou cut it to 2-1 on a penalty shot at 5:41 of the second after he was hooked by Filip Hronek on a breakaway. It was Athanasiou’s first goal with the Blackhawks after he signed a one-year contract July 13.

Kubalik restored the two-goal lead to 3-1 at 11:18 when he tipped in a shot by Olli Maatta.

“We just let our foot off the gas,” Larkin said. “They came out to play in the third. We didn’t. We didn’t get the extra point, so it doesn’t look good right now.”

NOTES: Chicago recalled goalie Arvid Soderblom from Rockford of the American Hockey League after the game. Defenseman Alec Regula was sent down. … Lalonde became the first coach in Red Wings history to get at least one point in each of his first four games, passing Jeff Blashill (3-0-0 in 2015-16), Mike Babcock (3-0-0 in 2005-06), Jimmy Skinner (3-0-0 in 1954-55) and Tommy Ivan (2-0-1 in 1947-48). … Chicago has scored three short-handed goals this season, including two by Lafferty in the win against San Jose. … Blackhawks defenseman Jake McCabe had one shot on goal, four hits and one blocked shot in 16:02 of ice time after missing the first three games following cervical spine surgery over the summer. … Kubalik, who signed a two-year contract with Detroit on July 13, played his first three NHL seasons with Chicago and had 116 points (62 goals, 54 assists) in 202 regular-season games.