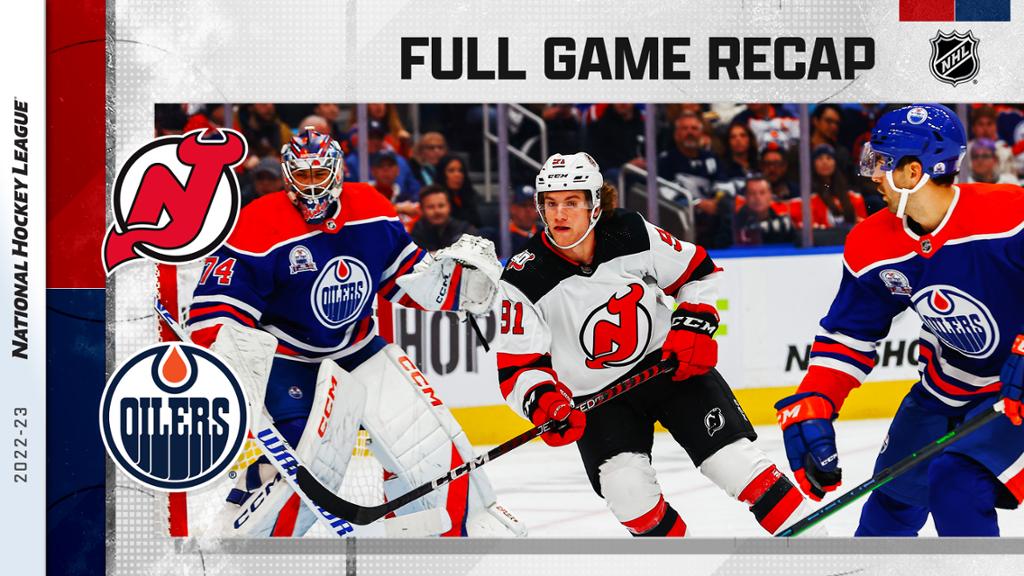 EDMONTON — Ryan Graves and Jesper Bratt scored seven seconds apart late in the third period to give the New Jersey Devils a 4-3 win against the Edmonton Oilers at Rogers Place on Thursday.

Graves tied it 3-3 at 16:45 when his shot from the high slot trickled five-hole on Stuart Skinner. Bratt then put New Jersey in front 4-3 at 16:52 after he received a stretch pass from John Marino off the face-off and shot blocker side from the edge of the right circle.

“Yeah, it’s been a play we’ve been practicing and I’ve tried it a couple of times before,” Bratt said. “I trusted [Marino] to make that play. He’s been a great player for us all year, and I knew he could make that play. We wanted to try it and it was good timing to do it.

“We didn’t start the way we wanted in the first and second period, but we were really dialed in in the locker room after the second period, and we know we can play a lot better than we did and really showed a lot of character there. I thought it was a character win, and it started with Miles and his line and that really got us going.”

Miles Wood had two goals and an assist for New Jersey (8-3-0), which has won five straight (outscored opponents 23-8).

Mackenzie Blackwood allowed two goals on 18 shots before leaving in the second period with an undisclosed injury. Vitek Vanecek made 18 saves in relief.

Connor McDavid had a goal and assist, Tyson Barrie had two assists, and Skinner made 39 saves for the Oilers (7-4-0), who had a five-game winning streak end.

“I definitely feel we should have won,” McDavid said. “I definitely feel like we created enough chances. We probably gave up too many chances, but I thought [Skinner] gave us a great chance to win. You have a team on the ropes, and we had a couple looks there, and you’ve got to put them down. You have to find a way to close that one out.”

McDavid scored his 12th of the season to give Edmonton a 1-0 lead at 9:20 of the first period, finishing a pass from Zach Hyman on a 2-on-1.

Video: [email protected]: McDavid fires a pass into net on the rush

Wood tied it 1-1 at 12:22 on a one-timer from the top of the right circle following a turnover in the neutral zone by Dylan Holloway.

Derek Ryan put the Oilers back in front 2-1 at 8:00 of the second period, redirecting a shot from Barrie in front.

Leon Draisaitl pushed it to 3-1 at 9:26 on the first shot on Vanecek faced. He shot five-hole from low in the right circle on a power play.

“That was a game between two good hockey teams. Both teams had chances, but being up 3-1 going into the third period, we would have liked to close it out with a little more authority,” Oilers coach Jay Woodcroft said. “We had chances to improve our lead and it didn’t go our way, so we’re going to have to learn from some of the mistakes we made tonight.”

“We talked about in the second period that good teams have to be able to come back where they’re down,” Devils coach Lindy Ruff said. “We were going to have to put a little bit more gamble in our game. There was a lot we liked in our game, I thought we left some opportunities out there early. That was just two fast teams playing incredibly fast hockey.”

NOTES: The goals seven seconds apart by Graves and Bratt are the fastest in Devils history. … Ruff did not have an update on Blackwood postgame. … McDavid has 13 points (seven goals, six assists) during a four-game multipoint streak.