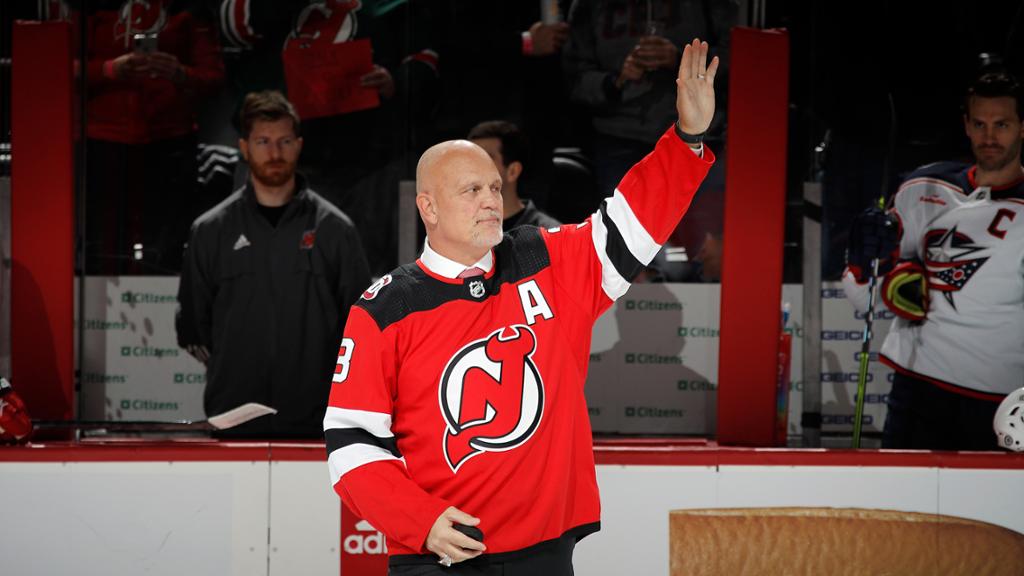 NEWARK, N.J. — Ken Daneyko was honored for 40 seasons as a player and broadcaster with the New Jersey Devils at Prudential Center on Sunday.

Daneyko was showered with surprises from the team and his family and was cheered by fans who came to celebrate a career that has earned him the nickname “Mr. Devil” before New Jersey defeated the Columbus Blue Jackets 7-1.

Taylor Daneyko, his daughter, raised the illuminated pitchfork to light up “The Rock” prior to puck drop. His wife, Margaret, presented him with a silver stick on behalf of the Devils to celebrate his 40 seasons and his 1,000th NHL game (Oct. 30, 1999). His son, Shane, then sang the national anthem.

Daneyko wore a Devils jersey with an ‘A’ stitched on the shoulder along with a 40th anniversary patch. He also dropped the ceremonial puck between Devils captain Nico Hischier and Blue Jackets captain Boone Jenner.

“What an honor. I’m so humbled,” Daneyko said. “I want to thank the Devils, the fans, for such a memorable afternoon. I was so surprised when I saw my son singing the national anthem. That was so great.”

The players, coaches and locker room staff gifted him his favorite cigars and a decorative cigar ashtray.

Daneyko was selected by the Devils in the first round (No. 18) of the 1982 NHL Draft, the first for the franchise after it relocated from Colorado. He played his entire NHL career in New Jersey, setting Devils records for games played (1,283) and penalty minutes (2,516), and was a part of three Stanley Cup championship teams (1995, 2000, 2003) as a stay-at-home defenseman always willing to do whatever it took to succeed.

After skating in every Stanley Cup Playof game in Devils history, Daneyko was made a healthy scratch during the quarterfinals and first six games of the 2003 Stanley Cup Final against the Anaheim Ducks. But for Game 7, coach Pat Burns wrote Daneyko’s name into the lineup, and he was on the ice when the final horn sounded to celebrate his third Stanley Cup championship.

Daneyko retired not long after the Cup win and had his No. 3 retired on March 24, 2006. He has been a color analyst for Devils games on MSG Networks ever since.

“Our team came out great and I think that win was for ‘Dano,'” Devils coach Lindy Ruff said. “We actually talked about it before the game, 40 years with the same team and I think it pumped our ‘D’ up to get three goals tonight so they did that in honor of Dano. I guess they had some of Dano’s scoring touch.”