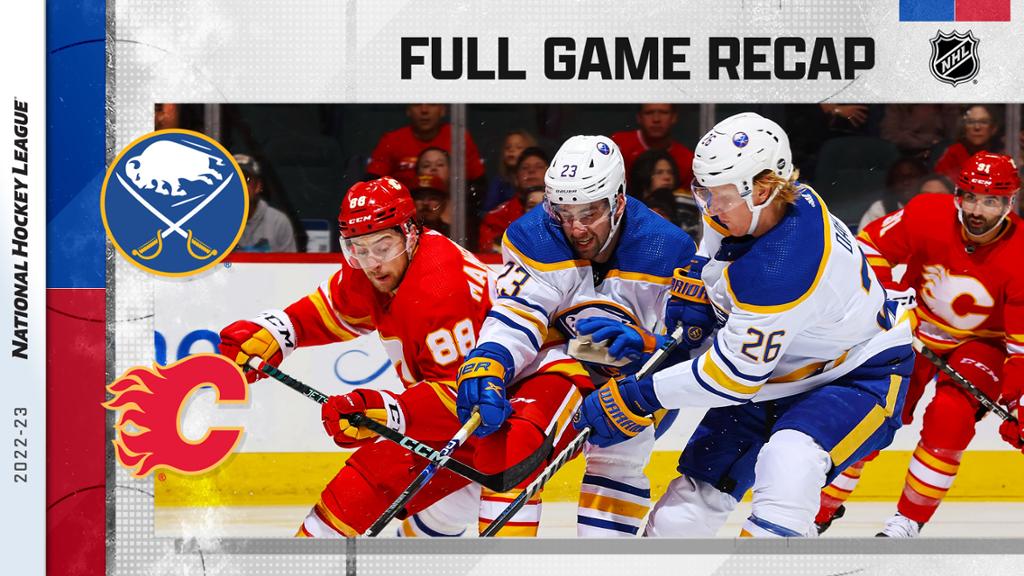 CALGARY — Rasmus Dahlin became the first defenseman in NHL history to score in each of the first four games of a season in the Buffalo Sabres’ 6-3 win against the Calgary Flames at Scotiabank Saddledome on Thursday.

Dahlin is also the second defenseman in Sabres history to have a four-game goal streak at any point of the season, joining Phil Housley (Nov. 22-30, 1988).

Alex Tuch scored his first NHL hat-trick, and Vinnie Hinostroza had three assists for the Sabres (3-1-0), who have won the first two of a four-game road trip. Eric Comrie made 40 saves.

“It’s the style of hockey we want to play,” Tuch said. “We want to be right in their face. We want to go right ahead. Playing offense is a lot more fun than playing defense. It really is. We’re trying to play as simple as possible and we’re just going. Whenever we have a chance we’re going, and it’s fun, and we’re playing together.”

Andrew Mangiapane, Trevor Lewis and Nikita Zadorov scored for the Flames (3-1-0). Jacob Markstrom made nine saves on 12 shots before being replaced at the start of the second period by Dan Vladar, who made 17 saves.

Mangiapane scored 4:21 into the first period to put Calgary up 1-0, and Dylan Cozens tied it 1-1 at 6:34 when he followed up his own rebound from a deke by tapping the puck over the goal line.

Dahlin beat Markstrom low blocker on a wrist shot from the slot to set the NHL record and put Buffalo up 2-1 at 10:49.

“There’s not many guys in the League that work harder than him on and off the ice,” Tuch said. “He’s really young, and one of the more mature hockey players I’ve ever played with, on and off the ice. It’s unbelievable to see. He leads by example and all the other guys follow. All the other guys want to be out there doing the right stuff with him. It’s unbelievable what he brings to this team. He doesn’t get enough credit, honestly, in this league.”

Casey Mittelstadt scored short-handed on a breakaway with a backhand under the crossbar to extend the Sabres lead to 3-1 at 13:10, and Tuch scored 46 seconds into the second period on the first shot Vladar faced to make it 4-1. Tuch has four goals in a three-game streak.

“You gotta give them credit, they played a great game and they responded well,” Flames forward Nazem Kadri said. “We got one early in the third period and obviously they responded with a goal. So you gotta tip your cap, but it was a little too easy for them breaking through the neutral zone tonight and that seemed to be a bit of an issue with us.”

“Somehow he always scores when we have to score,” Dahlin said. “He breaks the momentum. He’s such a momentum-breaker player. We’re super happy to have him and he did a great job tonight. Stay hot, ‘Tucky.'”

NOTES: Tuch became the first New York-born (Syracuse) player to have a hat trick for Buffalo. … JJ Peterka assisted on Dahlin’s goal to tie a Sabres rookie record with a four-game point streak (two goals, two assists) to open a season. Victor Olofsson also had a four-game point streak to start the 2019-20 season. … Flames coach Darryl Sutter coached his 1,401th NHL game, moving him into a tie with Ron Wilson for ninth in NHL history. … Flames defenseman Noah Hanifin did not play because of an undisclosed injury. … Sabres defenseman Henri Jokiharju left the game at 4:59 of the first period after taking a wrist shot to the face. There was no update.