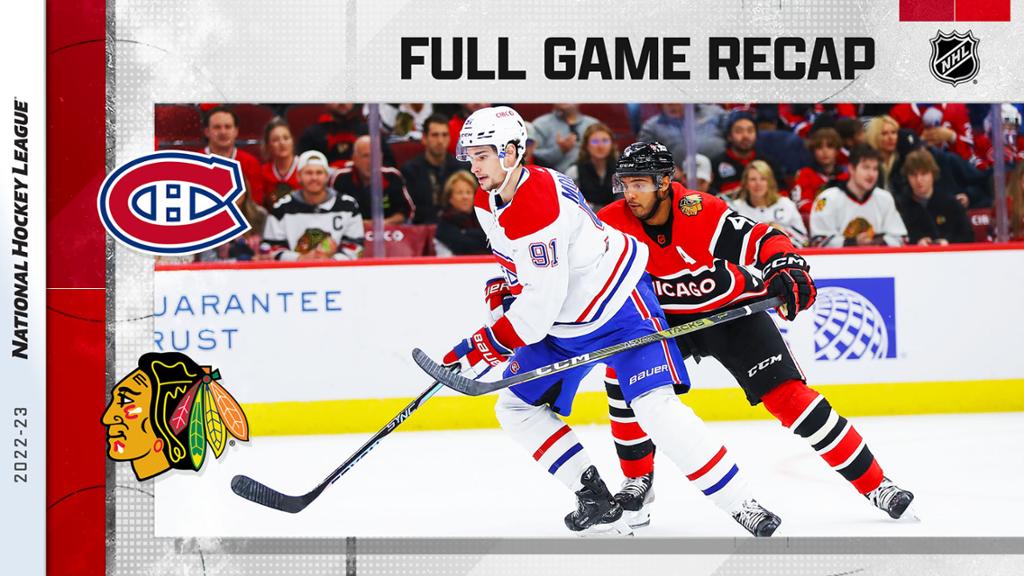 CHICAGO — Kirby Dach scored the shootout winner against his former team to give the Montreal Canadiens a 3-2 victory against the Chicago Blackhawks at United Center on Friday.

“I was excited,” Dach said. “Anytime you get to come back to a place you used to play in and put on a show like that, it’s pretty good.”

Dach was selected with the No. 3 pick by the Blackhawks in 2019 NHL Draft and played three seasons for them before being traded to the Canadiens on July 7. He was booed by the crowd after scoring in the shootout and held a hand to his ear after his game-winning shot.

“I did it back in junior when I got booed, so I thought it was fitting,” Dach said. “It just came to mind.”

Nick Suzuki and Joel Edmundson scored for Montreal (11-9-1), and Sam Montembeault made 30 saves. Montembeault started his second straight game after making 30 saves in a 3-1 win against the Columbus Blue Jackets on Wednesday.

“It feels great,” Montembeault said. “It’s obviously nice to see that the coaches trust me to get a second start in a row on the road trip like this. It’s always fun to come down here [to Chicago]. The music is great in the warmup, the national anthem really gets you going, so it’s always fun. To leave with two wins on this road trip is really nice.”

“We played from behind a little bit tonight, but I don’t know, maybe we’re better at that this year,” Blackhawks coach Luke Richardson said. “I thought we had a little trouble with our energy level tonight. I liked the try, but it just didn’t look like we had the legs there. Maybe [it’s] a little bit of the games catching up to us; no morning skate is a little different.

“But I think [we] battled, and [we] willed [ourselves] to overtime and then had a really good penalty kill in overtime. Unfortunately, [the Canadiens] got the one more shot. I’d love an extra point just because the way we’ve been battling the last few games.”

Edmundson gave Montreal a 1-0 lead at 3:21 of the first period when he tipped Sean Monahan‘s pass from the left side after a give-and-go. It was Edmundson’s first goal of the season.

Jones tied it 1-1 at 5:53 of the second period after a failed clearing attempt by Brendan Gallagher. Jason Dickinson passed the puck from the left corner to Jones, who scored from the right face-off circle for his first goal of the season.

“Yeah, that felt good,” Jones said. “I think I’ve had a lot of looks this year. I had some assists (seven) but haven’t had one go in, so it was nice to see it go in.”

Suzuki scored a power-play goal at 7:22 for a 2-1 lead with a wrist shot from the right circle after a pass from Mike Matheson.

Raddysh tied it 2-2 with 3:54 remaining in the third period on a power play, putting in the rebound of Patrick Kane‘s shot from the high slot.

The Canadiens had a power play at 2:39 of overtime but failed to score. Dach was Montreal’s the third shooter in the shootout after Cole Caufield and Suzuki each scored. Jonathan Toews and Andreas Athanasiou scored for the Blackhawks, but Kane was stopped.

“It’s definitely built for the dramatic, for sure,” Montreal coach Martin St. Louis said of Dach scoring. “You want to play a big game coming back here. I liked his game. To have the opportunity to be that guy that seals the deal at the end, it’s good that he was in that position. Obviously, he delivered for us.”

He had 59 points (19 goals, 40 assists) in 152 regular-season games for Chicago and six points (one goal, five assists) in nine Stanley Cup Playoff games before being acquired for a first- and third-round pick in the 2022 NHL Draft.

“You spend three years here, a high pick from here, we were fortunate enough to grab him on a trade,” St. Louis said. “It’s been nice to be front and center watching him every day and what he brings to our team. Tonight was a big play and big moment.”

NOTES: Canadiens forward Juraj Slafkovsky left the game at 6:20 of the third period after being hit by Dickinson … Toews scored the 52nd shootout goal of his NHL career, the most in history. Kane and Frans Nielsen are tied for second with 49. … Kane’s assist gave him 763 for his NHL career to move him into a tie with Chris Chelios for fourth place on the all-time list among United States-born players. They trail Phil Housley (894), Mike Modano (813) and Brian Leetch (781).