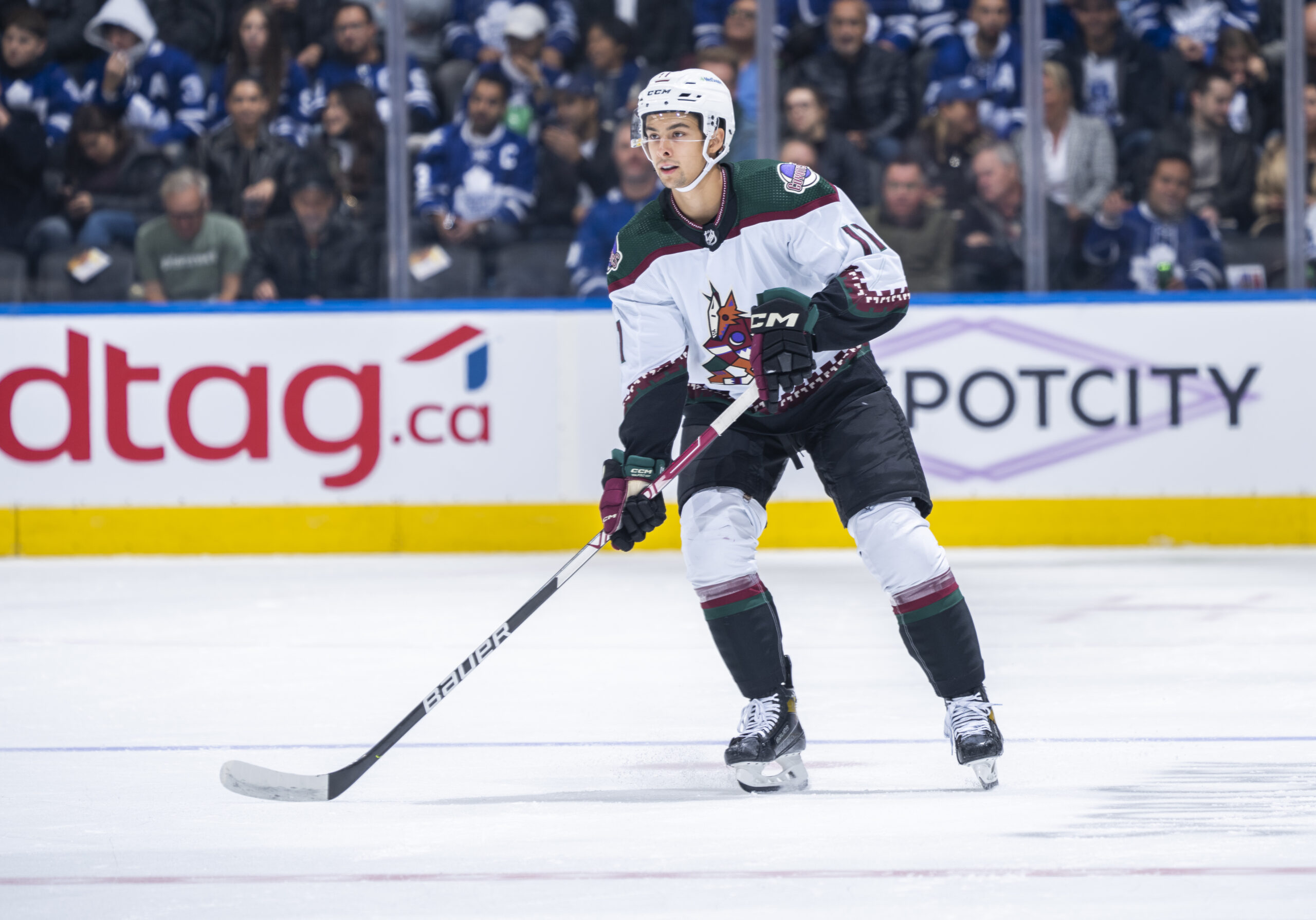 The Arizona Coyotes are through 11 games this season and have earned themselves nine points, putting them in seventh place in the Central Division, two points behind fifth. While the team hasn’t looked overly impressive in five of their first seven losses, including a recent 7-2 loss to the Dallas Stars, there has been a level of fight in this team. Nick Ritchie has played lights out, and so has Shayne Gostisbehere. Another name that has garnered his own attention, is rookie Dylan Guenther.

Through 10 games this season, the Coyotes’ prized rookie has registered two goals and four assists. He’s showcased elite playmaking and seems to have a handle on the early NHL season. General manager Bill Armstrong has taken notice of this and so has head coach Andre Tourigny. As a result, they rewarded his play by keeping him in the NHL for the season, and deservedly so.

Why Keep Guenther Around?

The biggest question leading up to this decision was should the Coyotes keep Guenther in the NHL. Would he benefit from another year in the Western Hockey League (WHL)? The simple answer to that is no. He has made some mistakes, as any rookie would, but he also has proven that he can play at this level, which is no secret to Coyotes fans. He dominated in his junior career, registering 86 goals and 92 assists for 178 points in 137 games for the Edmonton Oil Kings, including 91 points in 59 games last season.

Related: Coyotes’ Road to the Future Begins in Tucson

Guenther has seemingly transitioned that play to the NHL so far, scoring his first career goal in a loss to the Ottawa Senators. The praise doesn’t stop there either. Over the past two seasons since being drafted, he’s been one of the biggest standouts in training camp and in prospect tournaments and his name is almost always mentioned in every Coyotes-related news media. With a bright future on the horizon in prospects Liam Kirk, Conor Geekie, Logan Cooley, Josh Doan, and others, he leads the next wave of Coyotes’ stars.

What to Expect From Guenther as the 2022-23 Season Progresses

Guenther is currently averaging 12 minutes of ice time a night. That number will certainly increase as the season goes on, especially if the team decides to move guys such as Ritchie at the trade deadline for draft capital. He currently sits third in points for rookies this season, behind Matthew Beniers and Shane Pinto. He also has a chance to be in the Calder Trophy race at season’s end if he can elevate his game and continue to produce.

Guenther has a strong shot, and great on-ice awareness as seen from his first two career goals and four assists. He has also developed chemistry with his linemates such as Lawson Crouse. But while he continues to progress, he also has to work on some areas of his game. For fans, the biggest area of concern is him losing confidence or motivation as the team is still currently in a rebuild, hence the debate about keeping him up in the NHL this season.

While many will debate Armstrong’s decision as the season goes on, it’s worth noting that his play has earned him this right. This season will potentially get much more rough and tough to watch, especially after the trade deadline. Guenther shines as a bright spot for this at times, below-average team. People will tune in and come out to watch him play. His continued growth will also bring forth more media attention as time goes on.

The season is still long and there’s plenty of time for Guenther to continue to turn heads. He can make a difference on the ice, and the team knows this. He has all the makings of a future NHL star, and for Arizona fans, they’re getting a potential front-row seat at a spectacle in the making. The future is bright for the Coyotes and Guenther is leading the way.

Mr. Evans is originally from Greenville, SC where he currently resides. Mr. Evans has been involved in hockey for the past 18 years now, following the Arizona Coyotes and St. Louis Blues. During his free time, Mr. Evans enjoys spending time with his family and girlfriend as well as being up in the mountains or taking pictures. Prior to joining The Hockey Writers, Mr. Evans previously worked for The Puck Authority, covering the South Carolina Stingrays of the ECHL and FanSided’s Bleedin’ Blue, covering the St. Louis Blues. You can find Mr. Evans on Twitter at @HaynesPEvans.