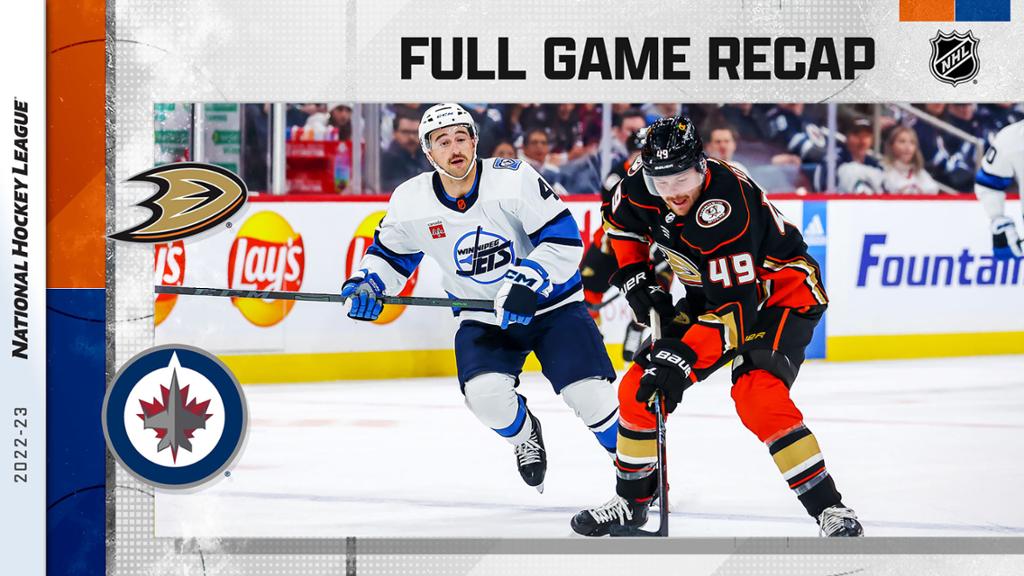 Kyle Connor completed his third NHL hat trick with 54 seconds remaining to give the Winnipeg Jets a 3-2 win against the Anaheim Ducks at Canada Life Centre in Winnipeg on Thursday.

Neal Pionk‘s initial shot from the right point went wide of the net, but Mark Scheifele got the rebound off the end boards, spun, and fed Connor for a one-timer from the high slot.

“My game wasn’t too far off,” Connor said. “I put a little more emphasis on getting to the net tonight, just being around more pucks there. A couple of good plays by [Scheifele] and [Sam Gagner] too.

“Just put yourself in good situations, that’s all you can ask for. So, I wasn’t getting too frustrated through the first 10, 12, 13 games there.”

“Kyle has been awesome,” Scheifele said. “He’s made so many good plays. I’ve been lucky to be on the receiving end on a bunch of his really nice passes. It was nice to pay him back tonight. What a fantastic pass that [Gagner] made on his second goal.”

“We played 59 good minutes,” Zegras said. “I make a bad play on the wall and miss my guy going to the front of the net and the game’s over. I would say it’s kind of on me.”

Terry gave Anaheim a 1-0 lead at 10:17 of the first period, scoring through traffic from above the left circle during a delayed penalty.

Connor tied it 1-1 at 12:32 of the second period, getting to a loose puck below the right circle following a stuff attempt by Pierre-Luc Dubois on a power play.

“It was just a matter of time,” Jets coach Rick Bowness said. “[Connor] had some really good looks early that didn’t go in. I think that first one gave him a big boost, and you could see all of a sudden the stride picked up, the enthusiasm picked up a lot. A little bit of a weight off his shoulders.”

“[Zegras] scored a massive goal to get us back in the game at 2-2, but it’s a great reminder, especially to all of our younger players, that keeping pucks out of our net is just as important as putting them in their net,” Ducks coach Dallas Eakins said.

Prior to the game, the Jets inducted Teemu Selanne and Teppo Numminen into their Hall of Fame.

“I wish I had coached Teemu a little longer,” said Bowness, whose first stint as Jets coach came in 1988-89. “I worked with Teppo here and in Phoenix, you couldn’t work with a finer gentleman and a better hockey player than Teppo. I was very happy for them, very proud of the way the organization handled it. It was first class tonight, as it should be with those two great individuals.”