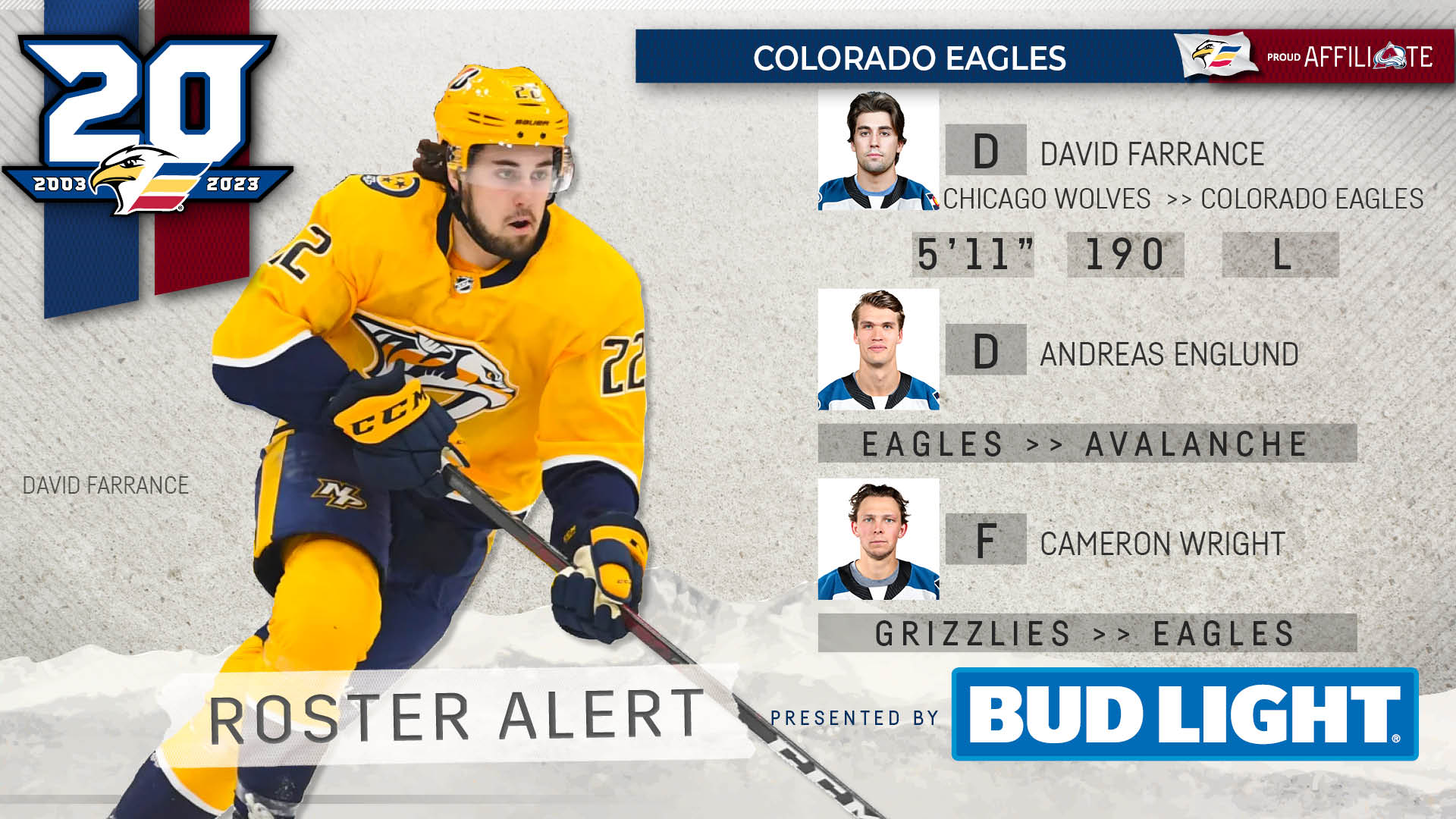 WINDSOR, CO. – The Colorado Eagles, proud AHL affiliate of the Colorado Avalanche, have announced that defenseman Andreas Englund has been recalled by the team’s NHL affiliate. In a separate transaction, the Eagles have recalled forward Cameron Wright from the ECHL’s Utah Grizzlies. In addition, Colorado has finalized a trade with the Chicago Wolves for defenseman David Farrance, in exchange for future considerations.

Farrance comes to Colorado after generating one goal and four assists in 14 games this season with the Wolves. A third-round pick of the Nashville Predators in the 2017 NHL Entry Draft, the 5-foot-11, 190-pound blueliner spent the 2020-21 campaign with the Milwaukee Admirals, compiling one goal and 13 assists during his rookie campaign. Farrance made his NHL debut during the 2020-21 season, skating in a pair of games with the Predators. The 23-year-old enjoyed a four-year career at the NCAA level at Boston University, amassing 26 goals and 62 assists in 113 contests with the Terriers. He would earn All-American honors in both 2019-20 and 2020-21 and was named a Hobey Baker Finalist in each of those seasons, as well.

Wright is poised to make his AHL debut after collecting 16 points in 16 ECHL games with Utah this season. An undrafted free agent out of the University of Denver, the 6-foot-1, 195-pound winger posted 23 goals with the Pioneers in 2021-22 and helped lead the team to the 2022 NCAA National Championship. The 24-year-old began his NCAA career by notching 51 goals and 50 assists in 144 contests at Bowling Green State University

Englund has netted a goal and two assists in 15 games this season with the Eagles and is currently tied for fourth in the AHL with 47 penalty minutes. A second-round pick of the Ottawa Senators in the 2014 NHL Entry Draft, Englund has posted four assists in 37 career NHL contests with the Avalanche and Senators. The 26-year-old has also amassed 10 goals and 39 assists in 300 AHL games with the Eagles, Belleville Senators and Binghamton Senators.

The Eagles will be back in action when they travel to take on the Ontario Reign on Friday, December 2nd at 8:00pm MT at Toyota Arena in Ontario, California. Tickets for all regular season games are on sale now and start at just $21. You can find more information on ticket packages, theme tickets, and promotional nights, by visiting ColoradoEagles.com or by calling the ticket department at (970) 686-7468.