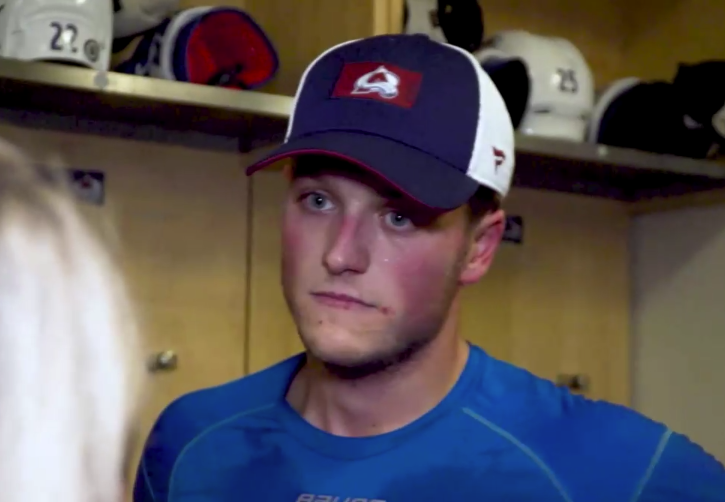 It’s been quite a week for Nelson Minor Hockey grad Dryden Hunt.

Hunt, 26, has tallied one point (1g/0a) in three games with the Rangers so far this season. Signed by Florida as a free agent on March 2, 2016, he has totalled 41 points (13g/28a) in 168 career NHL contests with the Panthers, Arizona Coyotes and New York and has appeared in five Stanley Cup Playoff contests.

“It was a bit of a wake-up all . . . not to say I didn’t put the work in. I had a great summer (and) I thought I had a great camp,” Hunt told reporters in an interview appearing on the Avalanche website.

“You look at the lineup, (Rangers) bring in guys and kind of see the writing on the wall. But at the same time, I thought there was a chance I’d stick around.”

Hunt has played three games with the Avalanche, including a 3-2 shootout win over his former team, since being claimed on waivers on October 20th.

“You go from a bit of a shock to your ego, and then the day after someone picks you up,” said Hunt explaining the emotions after being left off the Rangers protected roster.

“It’s just a whirlwind, the emotions of hockey. My emotions are kind of back to normal now and it’s good to be here (in Denver).”

The native of Cranbrook established NHL career highs in goals (6), assists (11), points (17), and games played (76) last season and ranked third on the team with 153 hits, also a career best. The 6-foot, 193-pound left wing has skated in 214 career contests in the American Hockey League, all with the Springfield Thunderbirds, totaling 150 points (72g/78a).

Hunt served as an alternate captain for Moose Jaw in 2015-16, led the league in goals (58) and was named the WHL Player of the Year and to the WHL (East) First All-Star Team.

“I’m from Calgary, so it reminds me a bit of back home so . . .. It’s definitely a change of pace from New York City, but I really enjoy (Denver).”

The Avs return to action Friday with a game in New Jersey against the Devils before meeting the New York Islanders Saturday.