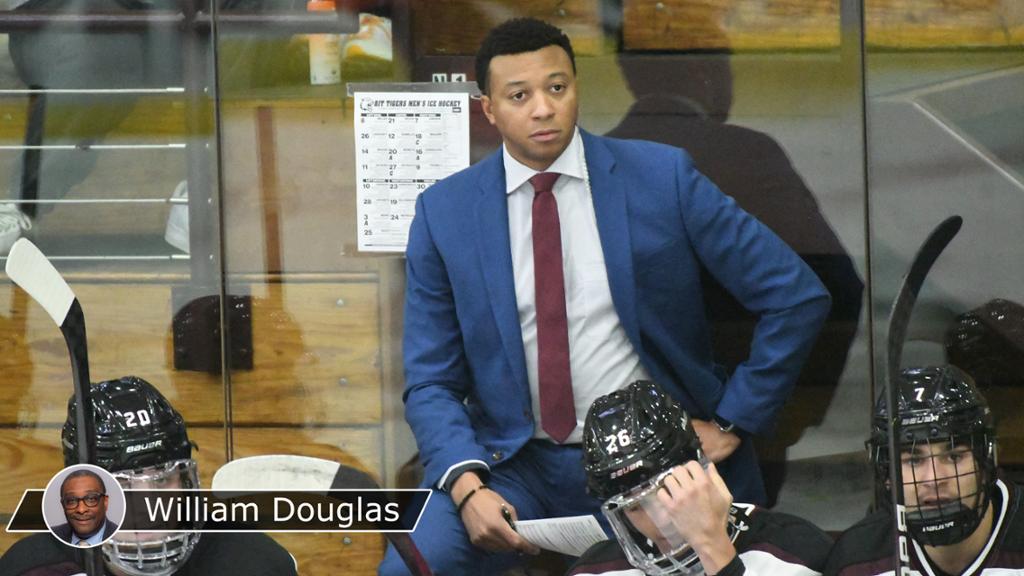 William Douglas has been writing The Color of Hockey blog since 2012. Douglas joined NHL.com in 2019 and writes about people of color in the sport. Today, he profiles Lennie Childs, an assistant for Union College’s NCAA Division I men’s hockey team.

“I started skating at the Gardens Ice House in Laurel, Maryland, when I was 5,” Childs said. “My parents were driving around and saw a sign that said, ‘Learn to Skate, Learn to Play Hockey.’ They were like, ‘Hey, do you want to try it?’ I was, like, ‘Sure,’ and fell in love with it.”

The journey and the love of the sport has taken Childs to Union College in Schenectady, New York, where he’s an assistant on the NCAA Division I men’s team, running the penalty kill and the defense, and assisting with recruiting.

“I absolutely love every aspect of it,” he said. “It’s beautiful and the campus is amazing.”

Hired in August, he joined University of Nebraska-Omaha’s Paul Jerrard and Leon Heyward at the University of St. Thomas (St. Paul, Minnesota) as the only Black men currently coaching in NCAA Division I men’s hockey.

“The campus is great, Black, white, Asian, it doesn’t matter, we’re all part of the same community,” Childs said. “It’s obviously cool to see another person of color on the other side of things, the women’s team, showing that there’s obviously a movement going on, which is great.”

The 31-year-old native of Silver Spring, Maryland joined the Union staff from Des Moines of the United States Hockey League, where he was an assistant who mainly led player development, penalty-kill units and offensive-zone production.

In 2017-18 he was coach of the Skipjacks Hockey Club (York, Pennsylvania) of the United States Premier Hockey League and guided them to 27-10-7 record. Childs was a forward at Concordia University Wisconsin, a private NCAA Division III institution in Mequon, Wisconsin, where he had 13 points (five goals, eight assists) in 88 games from 2012-16.

Union College men’s coach Josh Hauge said he long has been impressed by Childs, watching him progress as a player and coach while he was coaching for Fairbanks in the North American Hockey League and Tri-City and Fargo in the USHL.

“When he was coming up he went through a similar path that I did,” Hauge said. “I was an assistant coach myself and I would just use him as a resource, and he was one of my connections. I valued his opinion and he never steered me wrong. So when I got an opportunity to hire a staff, he was a guy I kind of targeted.”

Childs said he wants to become an NCAA Division I head coach someday. He sought guidance and tips from Jerrard and Heyward to help deepen his coaching knowledge.

“Leon Heyward, he’s amazing,” Childs said. “Last year, when I was in Des Moines, he came to scout, and I was picking his brain about being an assistant in college. I was, like, ‘I’m not sure if I want to go that route yet because you’re not in the building all the time.’ There’s a recruiting aspect. Not that I don’t love recruiting, but it was an aspect that I want to be around the team and maximize every single day. He said there are other ways of going about it and (college assistant coaching) is a really good thing.”

Childs said Jerrard, a former defenseman who played five games for the Minnesota North Stars in 1988-89 and was an assistant with the Dallas Stars, Colorado Avalanche and Calgary Flames before joining the University of Nebraska-Omaha staff in 2018, has been a penalty-kill mentor for him.

“I met him in Fargo, North Dakota, three years ago at a camp,” Childs said. “Just kind of walked up to him, shook his hand, talked a little bit and we kind of kept in touch. Obviously he was a guru with the penalty kill and NHL in the American Hockey League. And he had coffee with me in Des Moines, working on my penalty kill and learning from him a little bit. So both of them have been pretty instrumental in my development as a hockey coach for sure.”

Childs is a member of the NHL Coaches’ Association’s BIPOC (Black, Indigenous, and People of Color) program, an initiative that aims to support coaches in several areas, including skills development, leadership strategies, communication tactics and networking.

“As much as I want to say I want to be an NHL coach — the epitome of coaching, the pinnacle of success — I feel like I would almost lose out making relationships with these grassroots kids, these junior hockey kids, and having a part in their life in college development,” he said.

If an NHL team came calling, “I’d be honored to do it, but right now I’m just really happy with the process of, you know, the day to day.”