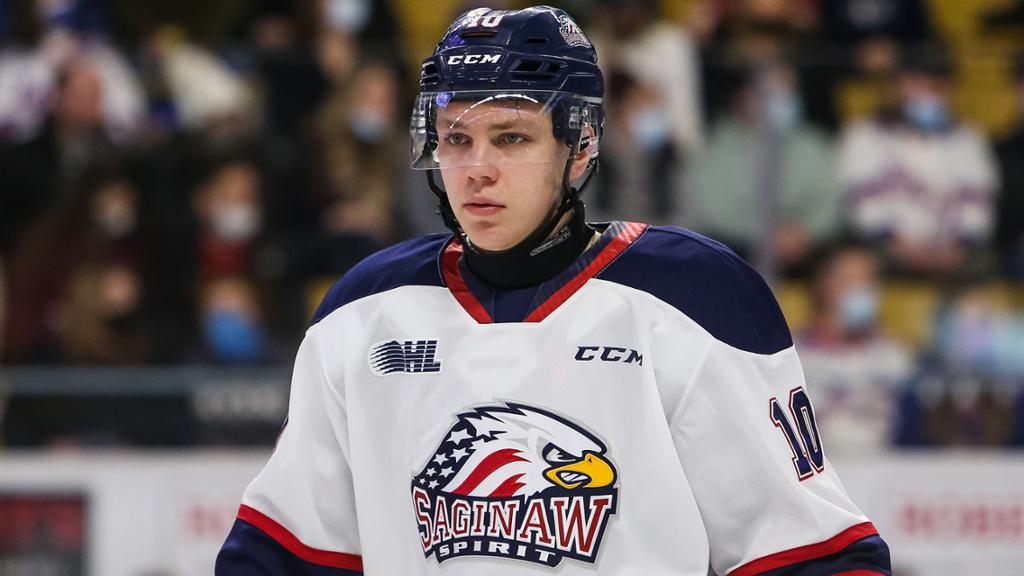 Pavel Mintyukov was seen as one of the top offensive defensemen available when the Anaheim Ducks selected him No. 10 in the 2022 NHL Draft.

And he’s taken his game to another level to start the season with Saginaw of the Ontario Hockey League.

Mintyukov had a goal and four assists in the season opener Oct. 1 and leads the OHL with 13 points (five goals, eight assists) in six games. He has at least two points in four of the six games.

“I’m really impressed with his offensive instincts and obviously that’s what we see in all his points,” Ducks director of player development Jim Johnsson said. “He makes real good decisions, he has the ability to get up in the plays, he makes plays out of his own end. I feel that he makes real quick decisions that I really like, and then he’s able to get up in the play.”

The biggest areas of growth for the 18-year-old will come in his skating and his physical strength, Johnson said. The Ducks already have had a skating coach working with Mintyukov to fine-tune his mechanics.

“It’s not an inefficient skating stride that he has,” Johnson said. “It’s just I think we can … as he gets stronger, I think he’s going to become more powerful. And I want to make sure that his mechanics are good so when he does get stronger with his leg strength that he’s going to be more explosive.”

Mintyukov got a look at what it will take from a strength standpoint during his time at Ducks training camp before he was returned to Saginaw on Sept. 27.

“He’s got to get stronger, which he will,” Johnson said. “He’s only 18. He’s a big (6-foot-1, 192 pounds), strong kid for his age group, but going up against NHL players and NHL forwards, that’s when I think what he learned at camp. He’s got to get stronger, a little more upper-body strength and lower body so he can handle his net play, in and around the net, and in the corners, so he can use his brains more efficiently. He’s very smart. So if he can have a little bit more strength in those areas along the walls, in the corners, around the net, he’s just going to be a better, more impressive player.”

Jordan Dumais, RW, Halifax (Columbus Blue Jackets): The 18-year-old has 13 points (two goals, 11 assists) in five games, and his 11 assists lead the Quebec Major Junior Hockey League. He has at least two points in all five games this season, including back-to-back games with three assists to start the season, and has a point on 13 of Halifax’s 22 goals. A third-round pick (No. 96) in the 2022 NHL Draft, the 18-year-old was third in the QMJHL last season with 109 points and tied for first with 70 assists.

Ty Voit, RW, Sarnia (Toronto Maple Leafs): Voit is one of eight players tied for third in the Ontario Hockey League with five goals and is second in the league with 12 points in six games. He has at least one point in each game, and four with at least two points. Voit scored the game-winning goal in two of Sarnia’s four wins and had the primary assist on the game-winning goal in a third. A fifth-round pick (No. 153) in the 2021 NHL Draft, the 19-year-old led Sarnia last season with 80 points (26 goals, 54 assists) in 67 games.

Reid Schaefer, LW, Seattle (Edmonton Oilers): Schaefer is in a five-way tie for second in the Western Hockey League with seven goals in five games. Three of his goals have been game-winners, and he had a hat trick in a 5-2 win against Medicine Hat on Tuesday. A first-round pick (No. 32) in the 2022 draft, the 19-year-old was fifth among WHL rookies last season with 32 goals in 66 games, then tied for second among rookies with 21 points (six goals, 15 assists) in 25 WHL playoff games.