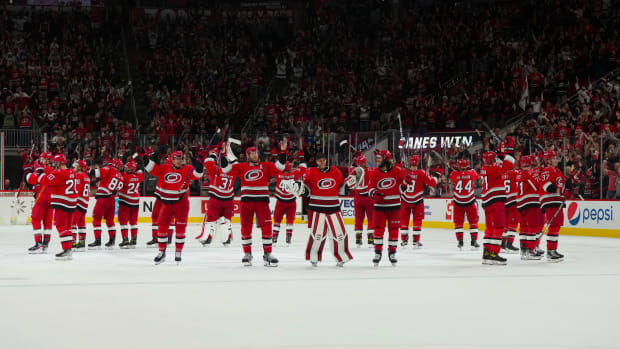 When THN.com’s web team answered 20 fantasy questions last week, it was intriguing to see where there was significant agreement on certain topics. Two of the topics that always pique the attention of readers are the Presidents’ Trophy picks and the Stanley Cup champs.

This year, one team stood out as the most popular pick to be the NHL’s best regular-season team: the Carolina Hurricanes were chosen as the Presidents’ Trophy pick by four of the nine web contributors who answered the questions. With two votes, the defending Cup champion Colorado Avalanche were the only other team that received more than a single vote as the Presidents’ Trophy winner.

As it happens, this writer was not one of the four who voted for the Canes. But there’s a more important question we answered that Carolina fans will appreciate – the “who wins the Cup?” pick. We were one of two contributors (the other was friend and colleague Lyle Richardson) who picked the Hurricanes to win their second Cup in franchise history.

The Canes weren’t the most popular pick to win the Cup – that designation went to the Tampa Bay Lightning, who garnered three votes, and really, there’s a solid case to be made there – but when you look at the start of the 2022-23 campaign and see how balanced, fast and skilled Carolina really is, you feel confident this is an organization on the verge of doing impressive things come playoff time.

The schedule-maker hasn’t been particularly kind to the Hurricanes to start the year – six of their first eight games are on the road – but in their first three games, Carolina has handled their business and beat three lesser teams (Columbus, San Jose and Seattle) that they have no excuses not to beat. This isn’t easy, as Toronto Maple Leafs fans will tell you this year.

But the road to a championship isn’t getting easier for Carolina. In their next dozen games, other than Buffalo and Philadelphia (both of who have had decent starts to the season), 10 games are coming against teams that have designs on long playoff runs: two games against Edmonton and one game apiece against Calgary, Vancouver, the New York Islanders, Washington, the Lightning, Toronto, Florida and the Avs. The positive vibes of their 3-0-0 start to the year quickly could disappear if they don’t play well.

But given that they’re led by one of the best coaches in the game today in Rod Brind’Amour, do the Canes look like a team that won’t be focused and ready to win many more games than they lose? Not to us, they don’t.

In all three wins, they’ve allowed only one goal and generated 11 goals on offense. They showed they could come from behind when they beat San Jose 2-1 on a goal in the final two minutes of regulation. In their season-opener, they gave up the first goal of the game, but scored the next four goals to handily put the Blue Jackets away 4-1. And in their latest game, Carolina built an early lead on the Kraken and never looked back, winning 5-1. There haven’t been meltdowns, erratic behavior or letdowns from goalies Frederik Andersen and Antti Raanta. It couldn’t have gone much better for them, and there’s no reason to suspect there’s a regression ahead.

Of course, cynics will point to Andersen’s lack of playoff success as a reason to worry about Carolina’s post-season chances, and that’s not unfair. This is a show-don’t-tell business, and Andersen has to show people he can stay healthy and thrive at the most important time of year before everyone buys into him as a true difference-maker.

But until then, the Hurricanes are likely to be the gold standard for teams in the regular season. Their depth at all positions is terrific. Their defense corps is big and talented. They’ve got a goalie tandem many other teams would be happy to employ. Not all of THN’s contributors see them as a Cup-winner, but most of us see them as a team to reckon with, at one time of year or another. Anything less would be one of the biggest surprises of the season.