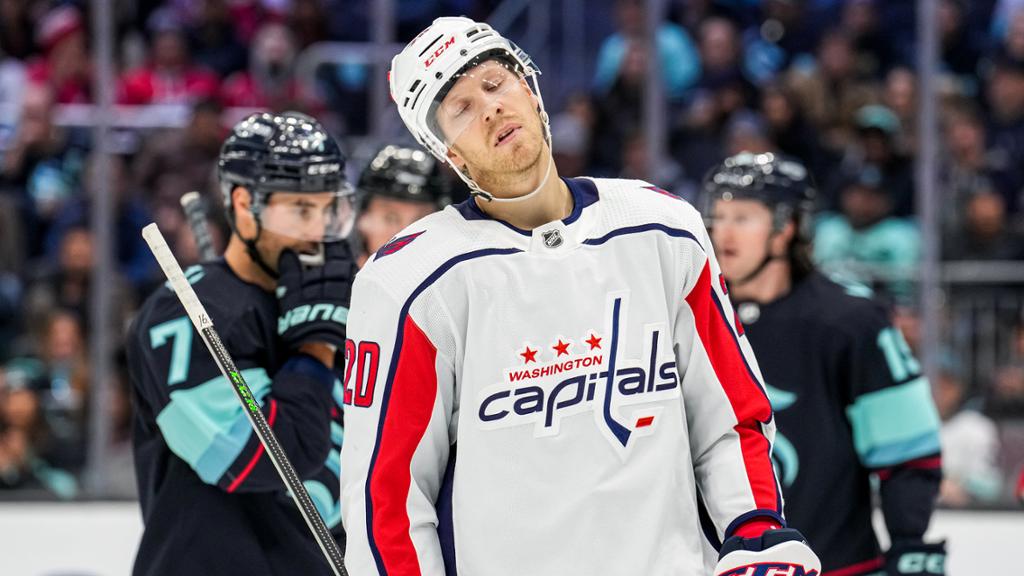 The Washington Capitals’ continued inconsistency and mounting injuries have general manager Brian MacLellan feeling a need of urgency less than two months into the season.

The Capitals (10-12-4) head into their game against the Edmonton Oilers at Rogers Place on Monday (8:30 p.m. ET; SN, NBCSWA, ESPN+, SN NOW) trailing the Florida Panthers by four points for the second wild card into the Stanley Cup Playoffs from the Eastern Conference. Washington is 1-2-1 on a six-game road trip that concludes at the Philadelphia Flyers on Wednesday.

“I think we have to have a good stretch here, starting now,” MacLellan said before a 5-2 loss at the Calgary Flames on Saturday. “We have to come out of this trip still competitive. There’s a couple teams in front of us. … We got to stay in the mix here and then grow it from there.”

MacLellan said this before goalie Darcy Kuemper and defenseman Martin Fehervary each left in the second period Saturday with an upper-body injury. Each is day to day.

They got a boost when forward T.J. Oshie returned Nov. 23 after missing 11 games with a lower-body injury, going 3-1-1 in their next five before losing to the Flames. But MacLellan acknowledged that Washington faces an uphill climb with an injury-depleted roster that has yet to string together three consecutive wins.

“We have to be concerned,” MacLellan said. “We dug ourselves a hole. The margin for error is pretty slim right now. … At the beginning of the year, we dug a hole and we’re trying to work our way out. We have to put a string of good games together — wins — to stay in and buy some time until we get some guys back, and hopefully we’re more competitive then.”

Orlov, who hasn’t played since Nov. 5, joined Washington on the road trip and practiced Sunday. He appears closest to playing. Backstrom, Wilson, and Malenstyn have been skating on their own at the Capitals practice facility. Brown and Hagelin are out long term and unlikely to return this season.

Backstrom has twice participated in morning skates wearing a non-contact jersey and has shown promising progress. MacLellan said the 35-year-old’s next steps will be to practice and be cleared for contact, but it remains unclear when or if he’ll be able to play this season.

“I’m saying he is doing really well, and his rehab is going well, and I don’t know that it has been tested,” MacLellan said. “We would like to see him in a practice and contact. … That will come in the next little bit I hope.”

The timetable for Wilson’s return is also unclear.

“I don’t have an exact date,” MacLellan said. “We’ll get a better picture in the next few weeks. Mid-December, we’ll have a pretty good idea. We can be more certain on it then.”

Missing key offensive players like Backstrom and Wilson, the Capitals are 27th in the NHL in scoring 2.73 goals per game and are 0-11-3 when scoring two goals or fewer.

“The margin for error with our team right now, it’s small,” MacLellan said. “Probably for a lot of teams throughout the league. You can’t make mistakes. … For us to get through this, our top players have to be our top players and they have to carry us through this stretch.”