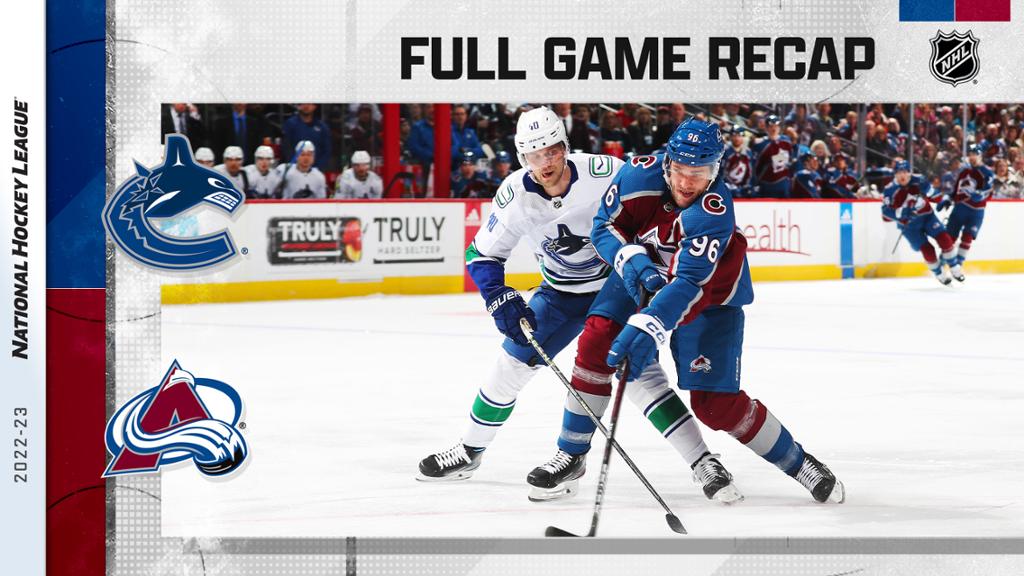 DENVER — Ethan Bear broke a tie with eight minutes remaining in the third period, and the Vancouver Canucks defeated the Colorado Avalanche 4-3 at Ball Arena on Wednesday.

Bear scored on a slap shot from just inside the blue line during a 4-on-4.

“[Sheldon Dries] gets on the wall, [Oliver Ekman-Larsson] gets it, and then I just get over and I just get a shot on net,” Bear said. “Sometimes when you shoot, good things happen.”

Bear and Dries each had a goal and an assist for the Canucks (7-10-3), who have won three of their past four games. Spencer Martin made 33 saves.

Mikko Rantanen scored two goals, and J.T. Compher and Artturi Lehkonen each had two assists for the Avalanche (11-6-1), who had won three straight. Pavel Francouz made 22 saves.

“I didn’t love our game tonight. I didn’t think we checked hard enough in the first period. It’s a dangerous team.” Colorado coach Jared Bednar said. “There’s some things obviously that I didn’t love. It wasn’t terrible at all times, but it wasn’t to our standard tonight.”

Ilya Mikheyev scored 21 seconds into the first period to give Vancouver a 1-0 lead after receiving a pass from Elias Petterson from behind the net.

“It gives you that extra confidence. Sometimes you get that lucky bounce and it goes in, and you just want to keep your foot on the gas and try to get another one,” Bear said. “It’s obviously a booster, but when you score one, there’s still sixty minutes to play. You got to keep going, right?”

Rantanen tied it 1-1 at 11:27 when he choked down on his stick, slid into the crease on one knee, and redirected a centering pass from Devon Toews behind Martin. Rantanen then made it 2-1 at 17:44, shooting into an open net during a power play after Compher corralled a rebound.

“The positives out of the game is special teams were really good again,” Bednar said. “Penalty kill’s been rolling. They had some good looks tonight, no question, but they’re keeping it out of the net. Power play clicks again, had some dangerous looks, made their goalie look good on a couple of them, but he scrambled and did a nice job making some saves as well.”

Vancouver appeared to have tied the game at 9:15 of the second period, but the goal was overturned after Colorado challenged for goalie interference.

However, Bo Horvat was able to tie it 2-2 when he tipped in Bear’s shot from the blue line at 10:34 of the second period. The goal was Horvat’s 16th, tying him for the NHL lead with Connor McDavid of the Edmonton Oilers and Jason Robertson of the Dallas Stars.

Makar put Colorado back in front 3-2 at 15:59 when he one-timed a pass from Nathan MacKinnon from the left face-off circle during a 5-on-3 power play a few seconds after hitting the far post from the same spot.

“Hopefully next time we get a good match with minimal special teams. A lot of it tonight was special teams,” Makar said. “Two power plays that are doing well, and two PKs that are somewhat doing well, as well. It’s tough to see them score on 4-on-4, but it could’ve been the complete opposite.”

Dries tied it 3-3 at 5:07 of the third period. He lifted Toews’ stick to let a tipped shot get through to Francouz before scoring with a backhand on the rebound.

“It was just a bouncing puck,” Dries said, “A little stick lift, hit ‘Frankie’s’ pad, and then the rebound was sitting right there. Just try to get it elevated as fast as I can.”