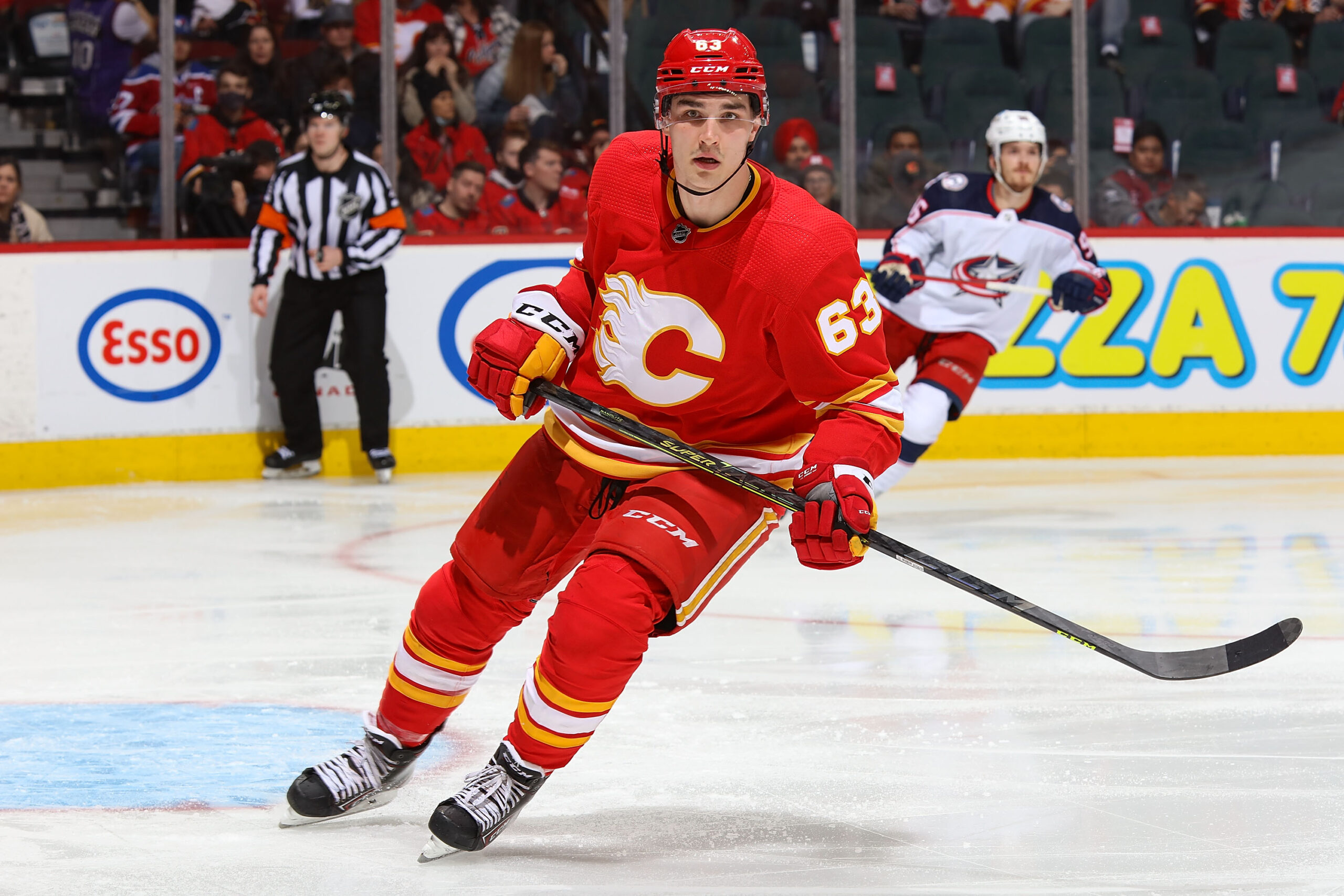 Depth is vital for any NHL team with championship aspirations. Therefore, today we’ll be taking a look at two Calgary Flames prospects who could eventually play supporting roles for the big club. Both men are from Europe, both happen to share a first name and each is at a different stage of his career. Adam Ružička of Slovakia has already seen NHL action, while Adam Klapka of the Czech Republic is huge and talented, but unproven. Both could turn out to be big-league regulars, but that will depend in part on what they show this season.

The Flames’ robust forward corps this year proved difficult for prospects and journeymen to crack. 15 players (10 of them forwards) were assigned to the American Hockey League (AHL) affiliate Calgary Wranglers on Oct. 2, including Klapka as well as former first-round picks Jakob Pelletier and Connor Zary. Days later, veterans Cody Eakin and Sonny Milano were released from their professional tryouts, and the newly-acquired Radim Zohorna also found himself assigned to the Wranglers.

Ružička, however, made it onto the Flames’ opening night roster, so we’ll begin by discussing his potential to become a full-time NHLer as soon as this year.

Ružička Poised to Take the Next Step

The Flames drafted Ružička in the fourth round of the 2017 NHL Entry Draft (109th overall) and he has already shown flashes of big-league ability. The left-shot center earned his first call-up in 2020-21, notching one assist in three NHL games to go with 11 goals and 21 points in 28 minor-league appearances. Last season, he split time between the AHL’s Stockton Heat (now the Wranglers) and the Flames, and the results were promising.

In 2021-22, Ružička eclipsed the point-per-game mark for the first time in his professional career, notching 11 goals and 20 points in 16 outings with the Heat. More importantly, he dressed 28 times in a Flames uniform, where he scored five goals and 10 points to go with a plus-8 rating. Not too shabby for a 23-year-old former fourth-round pick playing bottom-six minutes against NHL opposition.

However, the Flames are deep at center, and Ružička is not going to supersede Elias Lindholm, Nazem Kadri or Mikael Backlund in the lineup anytime soon. That means he may be jockeying with offseason acquisition Kevin Rooney to be a fourth-line pivot. The Slovakian certainly has more offensive upside than Rooney, who in 2021-22 managed just 12 points in 61 games for the New York Rangers. Yet the latter, at 29 years of age, is an experienced checking forward and likely a better fit for the hard-nosed defensive duties of head coach Darryl Sutter’s grind line.

At 6-foot-4 and 220 pounds, Ružička certainly has the size and strength to be physical, but would it benefit him long-term to play as a fourth-line center this year? Maybe not, because he projects more as a power forward than a grinder: a mobile big man with solid passing and puck control skills. While Sutter usually gives his fourth line a healthy amount of ice time, he also expects them to backcheck consistently and do the dirty work. Ružička would be better served in a role where he can focus on making plays like this:

Interestingly, the Flames gave Ružička a qualifying offer in July, but he did not ink a new deal until Sept. 21: a two-year contract with an average annual value (AAV) of $762,500. It wasn’t the most dramatic holdout in the world, but the Slovakian and his camp might have hesitated to sign due to uncertainty surrounding his role going forth. It obviously wasn’t a major issue, but the question remains: where could he fit in the lineup?

Barring injuries to others, the only feasible way Ružička plays higher than the bottom unit anytime soon is if he manages to convert to the wing. The Flames are not deep on the port side, with Milan Lucic and Trevor Lewis among those vying for spots there. Ideally, you’d play both of those gritty veterans on the fourth line by moving Lewis to the right. Ružička has already seen preseason action at left wing on a line with Zary and Milano, and if he can pick up a new position, it would be his best chance to earn big-league minutes sooner rather than later.

Such an outcome would also benefit the Flames, who currently have Rooney, Lucic, Lewis and Brett Ritchie as four of their bottom-six forwards. None of them bring any substantial offense to the table. If Ružička can establish himself at the wing with, say Backlund and Blake Coleman, he could help provide depth scoring from the third line that will be especially important come playoff time. Backlund and Coleman could also shelter and mentor him as he tries to round out his overall two-way game.

The Sky’s the Limit for Klapka

Back on May 16, Klapka, a 22-year-old right winger from Prague, Czech Republic, signed a two-year entry-level deal with an AAV of $925,000. Why would an undrafted free agent like him, who was already sent down to the Wranglers, deserve extra analysis? Because it’s not every day that a hockey team acquires a player the size of a basketball power forward.

Scouts will always be interested in measurables to some degree, and the 6-foot-8, 235-pound Klapka has plenty of those. If he were to make the NHL, he would match now-retired enforcer John Scott for the distinction of tallest forward ever to suit up in the big league. Soon-to-be Hall of Fame defenseman Zdeno Chara holds the overall height record at 6-foot-9.

Klapka’s strengths are not hard to envision. He can be a freight train driving to the net, he’s a beast working the corners and he’s not afraid to dish out punishing body checks. He’s got soft hands like Ružička, which he uses to hold onto the puck and make the occasional sweet pass. The Czech product is even willing to fight, as he did on Sept. 25 in a preseason game against veteran scrapper Vincent Arseneau of the Vancouver Canucks. The right-shooting Klapka also wields a howitzer, as befitting a player his size:

Klapka’s poise likely comes from his professional experience in the Czech Extraliga, the top hockey league in his native country. In 2021-22, he scored six goals and 18 points in 44 regular-season games with Bílí Tygři Liberec, following that up with a goal and four points in 10 playoff appearances. Playing with and against older athletes in his early 20s was sure to have helped the Czech product work on himself.

Make no mistake, though: Klapka is still very raw, and there are plenty of other big forwards who could not succeed in the NHL despite having potential. Take Michael McCarron for instance: the 6-foot-6, 232-pound forward was drafted 25th overall by the Montreal Canadiens in 2013, but now plays for the AHL’s Milwaukee Admirals. His best big-league outing: five points in 31 games in 2016-17 with the Canadiens.

All this to say that fans should temper their expectations of Klapka. Even having Colborne’s career trajectory would be a meaningful accomplishment for an undrafted free agent like him. Yet if the enormous Czech can develop into a long-term bottom-six (or even a top-nine) forward, his latent mix of skill and size presents a tantalizing possibility for the Flames. Imagine, for example, him cycling the puck and crashing in on the forecheck with Ružička someday.

“You’ve got a big winger like that who can hang onto the puck, and make plays and go to the net (and) is willing to go to the hard areas,” said Flames assistant coach Kirk Muller about Klapka. “He’s raw, he’s got a lot to learn about the North American game. But there’s stuff there that gets you excited.”

David Song is a freelance sports reporter and a graduate of the distinguished IUPUI Sports Capital Journalism program. He covers the Calgary Flames for The Hockey Writers and has previously reported on everything from March Madness college basketball to PGA Tour Champions golf to U Sports hockey. You can find some of his work here.

Born in New York City and raised in Calgary, Alberta, David also co-hosts The Draft Board podcast in his spare time.