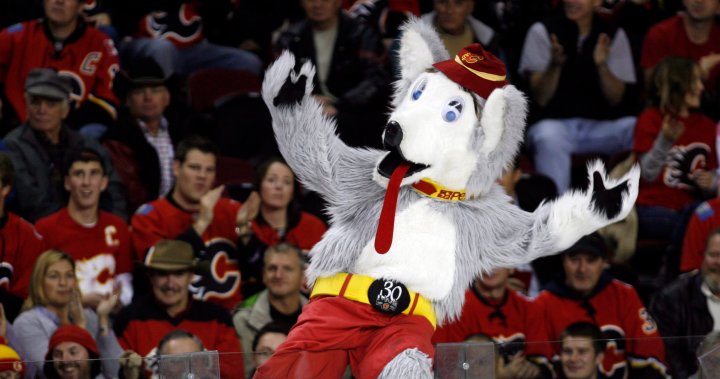 It turns out NHL fans are not fans of the Calgary Flames mascot, ranking him dead last in a poll of favourite team mascots across the league.

The survey, conducted by NY.bet, an online sports betting site, polled more than 900 Canadian and American hockey fans on all things mascot-related and found that the Saddledome mainstay was the least popular character in the league.

To add insult to injury, Harvey was also voted as the second-most obnoxious mascot during games (behind the Philadelphia Flyers’ Gritty) and the third-scariest mascot in the NHL.

It’s some rough news for Harvey, who holds the honour of being the first mascot in the NHL. But lest fans from other Canadian franchises get too triumphant — most of the Canadian mascots placed in the bottom half of the rankings, too.

The Ottawa Senators’ Spartacat placed 30th on the list of NHL mascots — only one place above Harvey. Youppi! of the Montreal Canadiens came in 26th place, Fin the Whale of the Vancouver Canucks ranked 21st, and Hunter, the lynx mascot of the Edmonton Oilers, placed 19th.

The cost to attend an NHL game in each Canadian city, ranked

On the other hand, Mick E. Moose of the Winnipeg Jets polled as the second-most beloved mascot behind Detroit Red Wing’s Al the Octopus, and the Toronto Maple Leafs’ Carlton the Bear clinched 4th place.

“Shockingly, the best mascot isn’t even necessarily a ‘real’ mascot,” wrote NY.bet of their findings. “While Detroit fans know Al as the team mascot, and of course, Detroit’s history with throwing octopi on the ice is infamous, you won’t find Al walking around Little Caesars Arena or skating on the ice in between periods.

“Maybe that’s why he’s the favorite, he’s the only mascot that doesn’t have a physical presence,” they surmised.

In what the site calls the “least shocking news of the study,” Gritty takes the first place spot for most obnoxious mascot, while Harvey the Hound’s drum-beating ways secured him the second-place finish in the category. Victor E. Green of the Dallas Stars ranked third.

Someone paid US$220,000 for Steve Jobs’ worn-out Birkenstocks

As far as scary mascots go, Al the Octopus, Gritty and Harvey secured the one, two and three spots, respectively. Fans also found Hunter of the Oilers and the NJ Devil off-putting.

After seeing Harvey’s head pulled from the Saddledome during the Calgary’s devastating 2013 flood, you can see why some people might find him a bit scary.

On a brighter note, fans ranked Carlton the Bear as the cutest mascot in the NHL, followed by Bernie the St. Bernard with the Colorado Avalanche, Stormy of the Carolina Hurricanes, Nordy of the Minnesota Wild, and Louis of the St. Louis Blues.

Despite dragging a few of the leagues’ mascots through the mud, 78 per cent of those polled said they generally like mascots and the same percentage like their own team’s mascot. Sixty-six per cent also think mascots add to the overall NHL experience and love how mascots interact with fans.

NY.bet polled 914 self-identified NHL fans from Canada and the U.S between the ages of 18 and 76.

1:52
Calgary Flames mascot Harvey the Hound in running for Mascot Hall of Fame