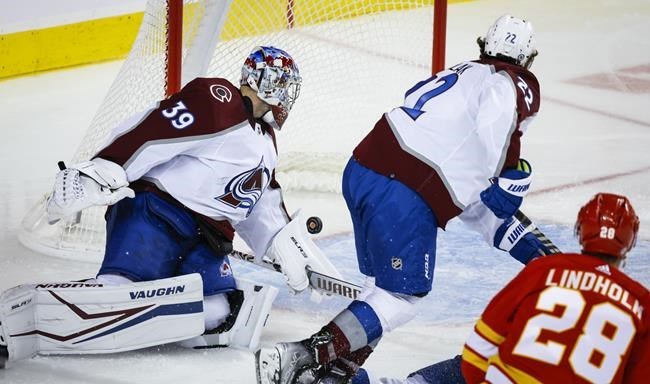 CALGARY — The Calgary Flames won their season opener for the first time in well over a decade with a 5-3 victory over the defending Stanley Cup champion Colorado Avalanche on Thursday.

CALGARY — The Calgary Flames won their season opener for the first time in well over a decade with a 5-3 victory over the defending Stanley Cup champion Colorado Avalanche on Thursday.

The Flames halted the NHL’s longest active winless streak in openers — 0-10-2 after their last win in 2009 — by scoring twice in the second and third periods.

Defenceman MacKenzie Weegar had a pair of assists. He joined Calgary’s other off-season acquisitions Jonathan Huberdeau, Nazem Kadri and Kevin Rooney in their regular-season debuts for the Flames.

Defenceman Bowen Byram, Nathan MacKinnon and Valeri Nichushkin scored for Colorado. Pavel Francouz stopped 22 shots in the loss in his first start of the season.

The Avalanche had travelled overnight to play their second game in as many days. They raised the Stanley Cup banner and beat the Chicago Blackhawks 5-2 at Ball Arena on Wednesday.

Kadri signed as a free agent with Calgary in August after three seasons with Colorado. Mere weeks after lifting the Cup with the Avalanche, the centre from London, Ont., met his former teammates wearing Flames red.

Kadri assisted on Calgary’s fourth goal and Huberdeau the fifth.

Lindholm and Toffoli scored power-play goals at 2:47 and 1:12 respectively, to start the third period, but MacKinnon countered at 3:08 on a breakaway and Nichushkin at 11:01 with a power-play goal.

Nichushkin cut the deficit on a give-and-go with Mikko Rantanen, who from behind the goal line fed the winger driving to the net.

With his famous turn of speed, MacKinnon went upstairs on Markstrom for Colorado’s second goal of the night.

Huberdeau at the side of the net froze Francouz and dished to Lindholm in the slot for Calgary’s fifth goal.

Toffoli deflected Kadri’s centring pass home and then took a high stick in the face from Cale Makar for another Flames power-play chance.

Calgary led 3-1 at 14:52 of the second period when Andersson collected a stretch pass from Weegar and scored five hole on a breakaway.

Dube scored short-handed at 3:31. He opted to shoot on a two-on-one with Andrew Mangiapane and beat Francouz far corner.

Rantanen had an open net to tie the game late in the second period, but put the puck off the post during a Colorado power play.

Ritchie pulled the hosts even at 11:23 of the first period. Milan Lucic from behind the goal line fed Ritchie in the slot to shovel the puck high by Francouz’s glove.

Andersson didn’t tie up Byram enough in the slot and the latter was able to flick the puck under Markstrom on Colorado’s first shot of the game at 1:39.

Toffoli had a good chance at the corner of Colorado’s net six minutes into the game, but Avs defenceman Devon Toews got his stick in the crease in time to keep the puck out of the net.

HELLO HUBERDEAU: Huberdeau’s contingent of friends and family at the Saddledome numbered over 30, including 22-year-old sister Josiane who sang “The Star-Spangled Banner” followed by George Canyon’s “O Canada”.

NOTES: The Avalanche were minus captain Gabriel Landeskog because of a lower-body injury sustained last season. He underwent knee surgery in March, but returned for playoffs … Centre Mikael Backlund appeared in his 827th career game as a Flame, moving him past Robyn Regehr into third in franchise history behind Jarome Iginla (1,219) and Mark Giordano (949).

UP NEXT: The Flames head to Edmonton to face the Oilers on Saturday. Colorado stays on the road to meet the Minnesota Wild on Monday.

This report by The Canadian Press was first published Oct. 13, 2022.