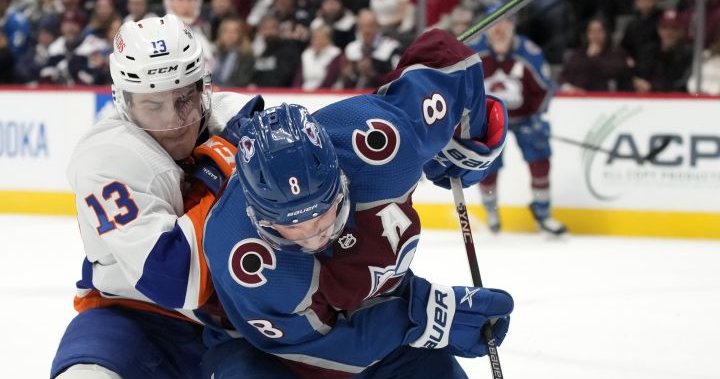 A Calgary-raised player who some hockey commentators call the most exciting defenceman to play in the National Hockey League since Bobby Orr is now receiving praise for his character for an act of integrity rarely seen in professional sports.

Cale Makar, a star player for the Colorado Avalanche, earned accolades on social media for what he did during an NHL game against the New York Islanders on Monday night.

During the first period, the 24-year-old — who was named the league’s top defenceman last season — went down behind his net as Islanders forward Mathew Barzal tried to get the puck from him with his stick. The referee put up his arm to signal a delayed penalty on Barzal, but Makar waved his hand to indicate to the ref that he actually just slipped and a penalty was not warranted.

After the game, Makar told reporters that he “would have felt a lot less guilty if I didn’t say anything than if I did.”

“I apologize to (my teammates). I don’t plan on doing that again.”

“(He’s) just an honest player who wants to beat you fair and square,” Lane Lambert said.

Reid Wilkins, who hosts the radio show Inside Sports on 630 CHED and covers the Edmonton Oilers, spoke to Global News about the unusual act during a competitive hockey game.

“I’ve never seen that before,” Wilkins said. “I’m not just talking about a ref changing his mind on a call. I also mean a player convincing a ref to not give his team a power play.

“I wonder if Makar will be able to successfully talk his way out of the penalty box the next time he’s called for something.”

1:49
Calgary’s Cale Makar has his day with Stanley Cup


The Avalanche earned a 1-0 shootout win over the Islanders in Monday night’s game in Denver.

READ MORE: Cale Makar’s day with Stanley Cup a repeat of his own childhood experience

Below are a few of the tweets about Makar that got traction on Twitter on Tuesday.

No way. Cale Makar just drew a penalty and then told the ref that he just slipped and the penalty got taken off.

Great sportsmanship. I don’t know if I’ve ever seen that in hockey.

Have never seen anything like this in my life. Major kudos to Cale Makar. pic.twitter.com/77jlSe39mW

Ok so *if* Cale Makar did in fact tell the officials it wasn’t a penalty, does that make you have mad respect for Makar? Yes or yes? #GoAvsGo

–With files from Michael Kelly, The Associated Press