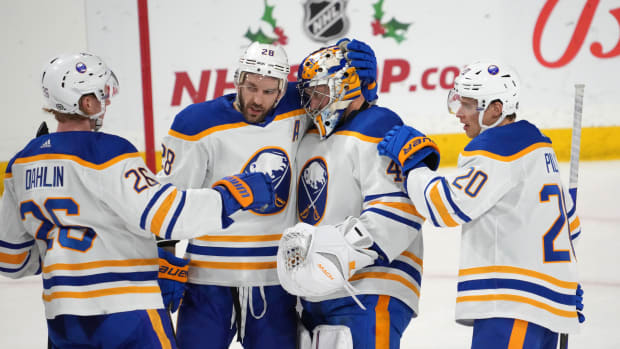 Could it… could it really be? The Buffalo Sabres, within striking distance for fourth place in the Atlantic Division and the final wild-card berth in the Eastern Conference? That Buffalo Sabres team? Virginia, is it actually a Santa Claus Christmas gift?!

Yes. We think the answer is “yes.” After 32 games, the Sabres are one point behind Detroit for fourth in the Atlantic. While they trail the Washington Capitals by eight standings points for the second wild-card berth in the East, they also have four games in hand on the Caps. They’re in the thick of it, and they’ve earned their way into the playoff mix.

And Buffalo is headed into the NHL’s Christmas break on a roll. The Sabres are 16-14-2. They’re on a four-game win streak, and they’ve won six of their past eight games. And their wins haven’t always come against pushover teams; they’ve defeated the Los Angeles Kings, Colorado Avalanche and Vegas Golden Knights in their current streak, and they’ve handled teams they should handle – San Jose, Columbus and Arizona – with ease. At long, long last, the Sabres look like they have a legitimate chance of winning more often than not.

This is a significant step forward for Buffalo. The Sabres have been cannon fodder for the better part of the past 15 seasons. They’ve missed the playoffs in 13 of the past 15 years – never making it out of the first round – and in eight of the past nine seasons, they haven’t finished higher than sixth in their division.

They’ve been whupped so hard so often, you can understand why attendance at their games has been so dismal. It’s hard to blame long-suffering Buffalo fans for being in show-me-don’t-tell-me mode, but for the first time in what feels like forever, the Sabres are truly showing everyone they’ve finally turned the corner toward prosperity.

Without question, one of the biggest drivers of Buffalo’s success this year is the development of center Tage Thompson. The 25-year-old has emerged as a true star for them – the kind of player who has become an absolute steal at both his draft position (26th overall in 2016) and as a trade acquisition (coming to the Sabres from St. Louis in the Ryan O’Reilly deal in 2018). But if it were just a one-man show for the Sabres, we might be looking at them at the bottom of the Atlantic once again.

Offense hasn’t been an issue for the Sabres, but their defense still needs work. It’s true they’ve got two workhorse young D-men in Rasmus Dahlin and Owen Power, and veteran goalie Craig Anderson has defied Father Time to put up above-average numbers (.922 save percentage, 2.65 goals-against average in 13 games) in net. However, depth on ‘D’ is an area of concern, and Anderson is 41 years old and hasn’t played more than 34 games since the 2018-19 campaign.

There’s still a risk going forward with this lineup, and Buffalo will be battling the Red Wings, Florida Panthers and Ottawa Senators for the best spot they can carve out in the Atlantic. They’ll also be competing with three surging Metropolitan teams, the Capitals, New York Rangers and Pittsburgh Penguins, for a wild-card spot.

But what a relief it must be for Sabres fans these days. After so much misery, there’s finally a reason to feel great about Buffalo’s future – immediately and in the long term. It’s the best Christmas present a Sabres supporter can ask for.