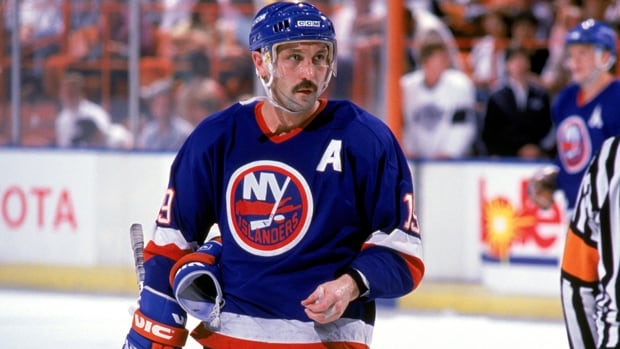 The Current24:09Bryan Trottier on being one of the NHL’s elite Indigenous players

When a young Bryan Trottier watched the legendary Jean Béliveau lift the Stanley Cup following one of his 10 championship wins with the Montreal Canadiens, he knew what he wanted to do in life.

“I was sitting on a little blanket, and I looked back at dad and I said, ‘Dad, I want to lift the Stanley Cup like Jean Béliveau,'” he told The Current‘s Matt Galloway.

“All he said was like, ‘Well, you better start practising.'”

Suffice it to say, Trottier practised — a lot.

Over the course of an 18-season NHL career, the young boy from Val Marie, Sask., developed into one of the league’s premier centremen.

Trottier won six Stanley Cups as a player, including four-straight championships with the New York Islanders between 1980 and 1983, and a seventh as an assistant coach with the Colorado Avalanche in 2001.

But don’t expect him to brag about his accolades.

“I’ve lost more than I’ve won,” he said. “But the winning just supersedes all the losses.”

WATCH | Bryan Trottier on playing on one of the NHL’s greatest lines, the Trio Grande:

Bryan Trottier on playing on one of the NHL’s greatest lines, the Trio Grande

Bryan Trottier and New York Islanders teammates Mike Bossy and Clark Gillies were known as the Trio Grande, one of the greatest lines in NHL history. He explains what it was like playing with Bossy and Gillies — and how the line got its name.

Trottier retired nearly 30 years ago. But the 66-year-old still has a lot of stories to tell.

In his new book, All Roads Home: A Life On and Off the Ice, Trottier explores the moments that shaped his hockey career — and what it was like being one of the sport’s elite Indigenous players.

“Where I come from is what I have today, and hockey has been my vehicle.”

Trottier’s mother was Irish, and his father was Cree Métis Chippewa.

He loved both sides of his family, and said he never felt like an “outcast” within his parents’ communities.

“I felt extremely welcome because I think both parents were kind of respected in their communities,” he said. “So I didn’t feel discrimination to that degree.”

But growing up in the 1950s and 1960s, Trottier still saw and heard others say “horrible, nasty things” about Indigenous peoples.

Not even the hockey rink was safe, he learned. In a tournament in Weyburn, Sask., a young Trottier saw the crowd rooting against an all-Indigenous team.

“[I said,] ‘Mom, why are these people saying all these strange things?'” he recalled. “That was kind of a big, big taste of it.”

Trottier said his parents taught him and his three siblings that if people made fun of them, it’s because they were jealous of their talents.

“We’re taught at an early age as well … just let it roll off your back because everybody has some kind of … ethnic background — and there’s ugly stigmas about everybody, so just don’t get involved in that junk,” he said.

WATCH | NHL Hall of Famer Bryan Trottier on growing up with Indigenous roots:

‘Discrimination to us was just jealousy’: Bryan Trottier on growing up with Indigenous roots

NHL hall of famer Bryan Trottier’s dad was Cree Métis Chippewa and his mom was Irish. He explains what it was like growing up in a mixed environment.

“There’s so much talent in First Nations [communities] — I’m so proud of that,” he said. “So take pride in and use that as your vehicle.”

Trottier said former NHL players take “great pride” in being ambassadors of the sport. That’s why he hopes the proper attention is given to stories like the recent Hockey Canada scandal.

“I’m still in Pittsburgh, so we don’t get as much [news] on that as to make a real great comment,” he said. “But anything to do with sexual abuse? Absolutely not. It’s just tragic.”

Hockey in Canada was rocked earlier this year with the revelations of a 2018 alleged group sexual assault involving members of that year’s Canadian world junior championship team — and Hockey Canada’s handling of it.

Since then, major sponsors have pulled their funding from Hockey Canada. The organization announced its CEO and entire board of directors will step aside.

But Trottier, who represented Canada at the 1975 World Junior Championship and the 1981 Canada Cup, said the positives of hockey stand out more than its negatives.

“Hockey culture, to a degree, is all about teamwork. It’s all about acceptance,” he said. “It’s all about working together, being dependable, responsible, all those things that have to do with desire and dedication.”

“Those are the things I believe stand out more about hockey than the negatives.”