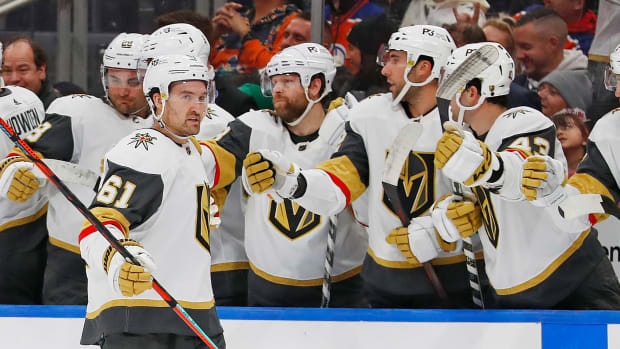 For most NHL teams, this current regular season has been a mixed bag, with many of them hovering around the pedestrian .500 to .600 points percentage in the standings. However, three teams have done themselves a great service so far this year, by separating themselves from the rest of their divisional contenders with some incredible records.

Those three teams – the New Jersey Devils in the Metropolitan Division, the Vegas Golden Knights in the Pacific Division and the Boston Bruins in the Atlantic Division – sit near or over the .800 mark.

The Devils, as many know by now, are the league’s biggest surprise, with a points percentage of .842 and a record of 16-3-0. The next-best Metro team is the Carolina Hurricanes, who are six wins and eight points behind them with a 10-5-4 mark.

The Bruins are the NHL’s best team, with a points percentage of .895 and a 17-2-0 record. The second-best Atlantic team, the Toronto Maple Leafs, have seven fewer victories and nine fewer standings points, with a 10-5-5 mark.

The Bruins, Devils and Kings have crafted themselves an important cushion, and the way the league has been overcome by injuries this season, that cushion is crucial to positioning a team as a virtually-definite playoff squad and acting as an insurance of sorts to help them make it through the punishing slog of the rest of the year.

If you don’t think the hot starts by Boston, Vegas and New Jersey are going to cool off, take a look at the NHL standings from the past few seasons. Last year, the Florida Panthers were the league’s top team, with a .744 points percentage. The runner-up for the top team in the league was the eventual Stanley Cup-winning Colorado Avalanche, with a .726 points percentage that lead the Central Division. And the Carolina Hurricanes had a .707 points percentage. Only one other franchise, the Toronto Maple Leafs, had a points percentage of .700 or over, and even then, with a team-record 54-27-1 mark, the Leafs barely got there with a .701 points percentage.

Much has been said about NHL parity, because it’s true – it’s difficult to be a leviathan team in the salary cap era. And again, this is why starting the season with far more wins than losses is so important, because you know there are going to be tough times ahead, whether that’s due to injuries or baffling slumps, and being able to handle a few losses in a row without reason for increased pressure or out-and-out panic.

Contrast the Golden Knights, Bruins and Devils’ current situations with that of the Central-leading Dallas Stars. Dallas has 25 standings points and a .658 points percentage, but that’s only five points ahead of the St. Louis Blues and Nashville Predators, who are tied for fourth spot with a .556 and .526 points percentage, respectively.

The pressure to win will always be there for every NHL team, but there has to be a relaxation of sorts in the dressing rooms of the Devils, Bruins and Golden Knights. They now know that, so long as they’re not abysmal for a long stretch, they can go out and play every night knowing it’s not the end of the world if they stumble into a three or four-game losing streak.

Meanwhile, the bottom-feeders of the four divisions – the Arizona Coyotes (.412), Anaheim Ducks (.289), Columbus Blue Jackets (.417) and Ottawa Senators (.361) – all must perform an act of magic just to make the playoffs, let alone get to the top of their division.

This is why NHL teams cannot afford to begin the season poorly. We’re now more than 20 percent of the way through the year, and it’s not just about teams trying to improve their points percentage – now, struggling teams have to hope all the teams above them in their division lose many games in regulation. Opponents who can earn at least one point per game for the most part of the rest of the way will help keep bottom feeders where they are at present. And the best teams in the league can afford to drop a few games in a row without falling down the standings.

We’ve said it before, but it’s worth repeating: you can’t win the Cup in the first two months of the season, but you can put yourself out of the reach of the Cup tournament in that time. The Bruins, Devils and Golden Knights have carved out a comfortable place for themselves thus far, and they don’t have to squeeze their sticks too hard in the pressure-packed schedule that’s ahead. That’s one important feat in a season that will have its ups and downs for every team.