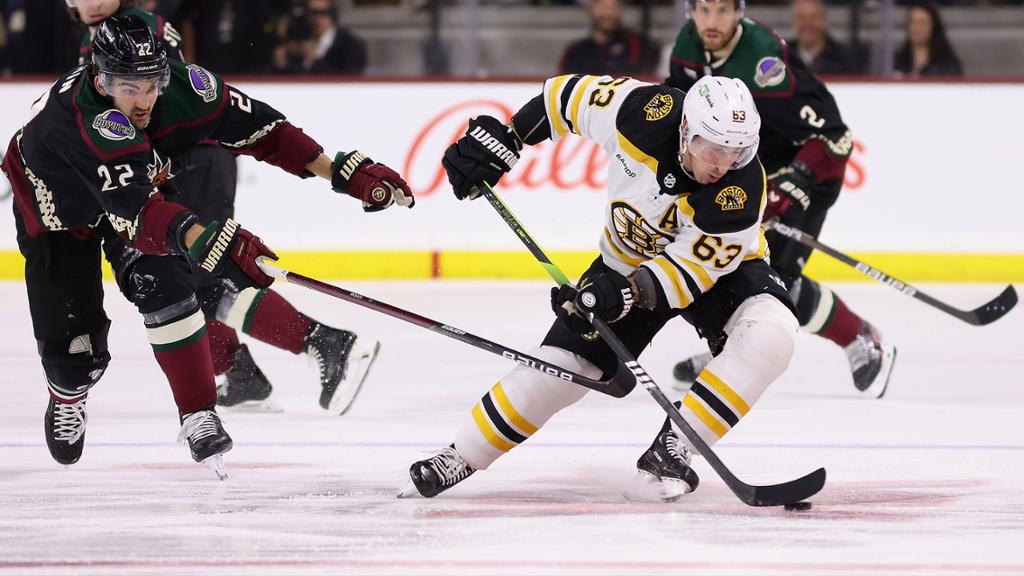 TEMPE, Ariz. – Nick Foligno tied the game late in the third period, but the Bruins fell to the Arizona Coyotes, 4-3, on Friday night at Mullett Arena when Lawson Crouse scored the winner with just 14 seconds remaining on a controversial play that the Black & Gold believed should have been whistled for icing.

As the puck trickled toward the Bruins’ net, it clanked off the side of the cage, leading to the linesman waving off an icing call. Arizona’s Matias Maccelli tracked down the loose puck and found Crouse to the right of Jeremy Swayman where the Coyotes winger hammered a one-timer home for the lead.

“We thought it should have been icing. It shouldn’t matter. The only thing that should matter is whether our D-man could touch the puck before it crosses the goal line,” coach Jim Montgomery said when asked if the icing was waved off because the puck crossed through the blue paint.

Foligno, whose power-play tally with 5:29 remaining tied the score at 3, said that he “was shocked” that no icing was called on the play.

“I actually couldn’t believe it,” said Foligno. “I was almost, like, dumbfounded. Not to knock those [officials], it’s a just a surprising call when 100 times out of 100 that’s an icing. I don’t really know the difference…it’s a disappointing way to end a good hockey game, to be honest with you, with that call at the end.”

Despite the disagreement with the call, Patrice Bergeron added that, ultimately, the Bruins – who fell to 21-4-1 on the season – needed to stick with the play no matter what the officials decided.

“It happens fast. I think there’s a debate for icing there,” said Bergeron. “But then the linesman is there to make a decision that’s based on a fraction of a second. We’ve got to keep playing, bottom line. You can’t just point fingers and blame it on decisions. That’s the last thing you want to do. I think we’ve got to own it and be better next game.”

Overall, it was a frustrating night for the Bruins, who finished with a 46-16 shot advantage and felt that they carried the play for much of the contest. They were unable to do enough, however, to solve Coyotes goalie Karel Vejmelka, who made 43 saves on 46 shots.

“We found a way to battle in the game,” said Foligno. “I think we always feel like we’re confident when we’re playing that well, good things are gonna happen for our club. It’s a little surprising that it didn’t. It was more circumstantial than not. I’m not gonna look down on our team tonight.

“There’s areas we can improve in. Anytime you lose, there’s always little things you can take away when you pepper the goalie like we did. We dominated that team. It’s unfortunate we didn’t come away with a win.”

After falling behind, 1-0, just 23 seconds into the game, David Pastrnak scored on the power play 4:29 later to even things up, before Charlie Coyle gave the Bruins a 2-1 lead at 7:48 of the second. Crouse then tallied his first of two goals 2:52 after that to knot things up, once again, while setting the stage for the Coyotes to take a 3-2 lead on Nick Schmaltz’s goal 53 seconds into the third.

“Obviously not the start that you want,” said Bergeron. “I thought we made a lot of great plays, had a lot of great looks. Ultimately, I think defensively we gave them some Grade A’s. They’re a good team, they’re gonna make you pay.