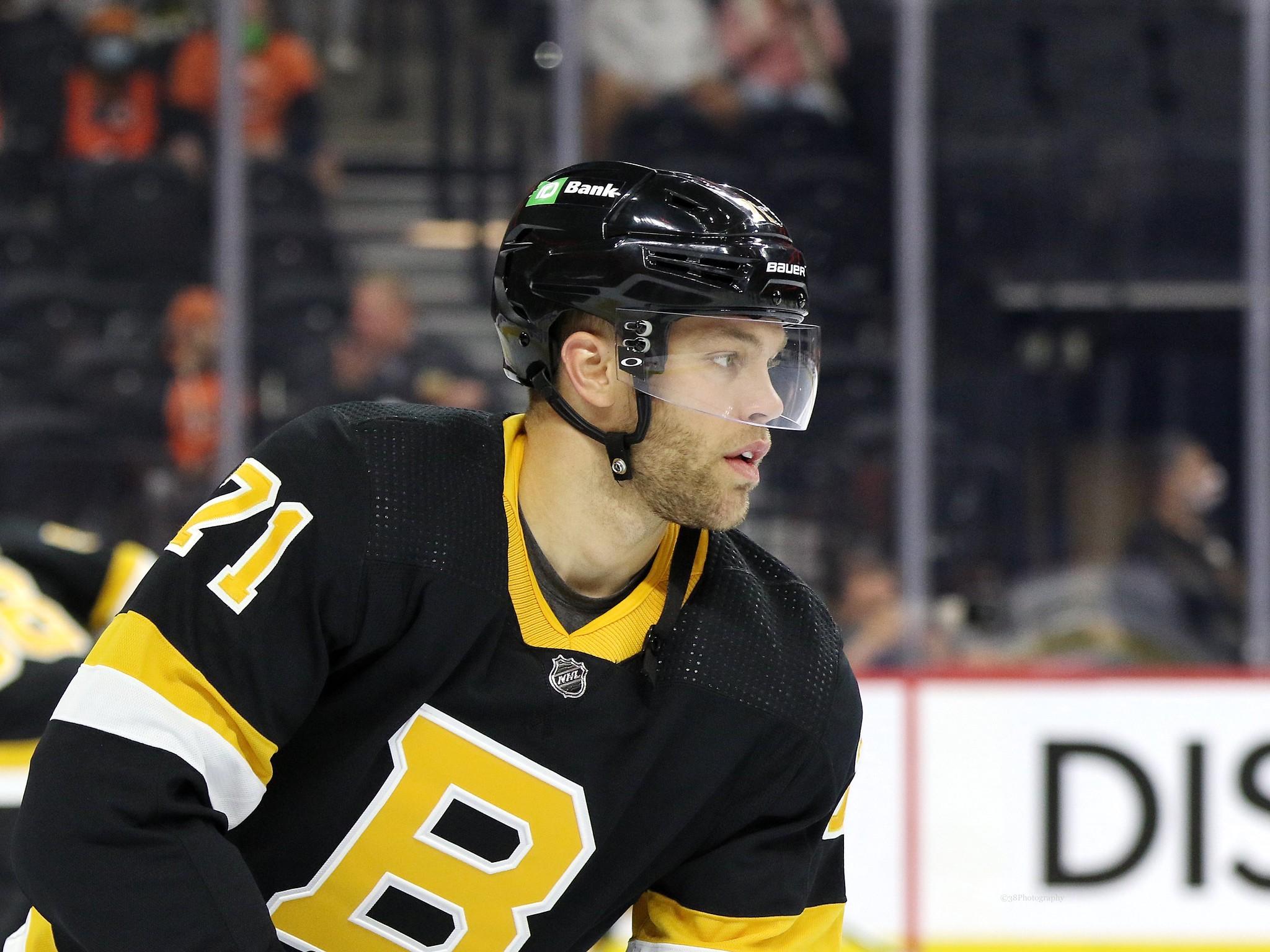 As has been said a lot so far, the Boston Bruins have truly had an incredible first quarter of the season and are looking better than anyone had expected coming into the season. A big reason for their success has been the depth contributions they are finally getting. For the past few seasons, the team has struggled to get the most out of its offensive players. Last year, the bottom-six struggled to have positive impacts during games, particularly when it came to scoring.

While there was some shuffling amongst the lines, recently, the third line of Charlie Coyle, Trent Frederic, and Taylor Hall has really clicked, taking their individual games to the next level and generating significant production out of the third line. The chemistry they’ve created has allowed the Bruins’ depth to truly shine through.

In his second full season as a Bruin, Hall is playing the best he’s looked since coming to Boston at the 2021 Trade Deadline. He currently has 20 points in 26 games, including 11 goals, four of which have been game-winners. He is currently on pace to reach 34 goals in 82 games, which would easily surpass last season’s 20 total goals. If he achieves that, it’ll only be the second time in his career that he scored more than 30 goals in a season. The last time it happened was in the 2017-18 season when he scored 39 and won the Hart Trophy.

He had a bit of a slow start as head coach Jim Montgomery spent some time playing around with the lines. He originally started playing on the wing of David Krejci, but since settling in on the third line with Coyle as his center, Hall has really found the sweet spot for his game. He’s averaging about 16 minutes of ice time a night, less than his career average of 18:38, but the chemistry and comfort he’s found on that line have led to greater quality to his minutes rather than quantity. He’s on pace for 63 points this season, which would be only the fifth time in his 13-year career that he’s gone over the 60-point mark.

When things click, they click. Hall’s resurgence on the third line has been a significant contributing factor to the team’s success this season. While it may not be what one would expect from a former first-overall selection, it is proving to be the right fit for the player and the team. He’s easily one of the best third-line wings in the NHL right now and if his success can continue, the Bruins are a legitimate threat for the Stanley Cup

Coyle may be a bit quieter than Hall on the third line, but he has been an incredibly solid third-line center in 2022-23 so far. After spending some time on the second line last season and not quite finding his groove, he’s demonstrated great comfort and ease in his game so far this year. He has 13 points in 26 games, including seven goals and is a plus-11. He’s on pace for 41 points this season, which would be the fourth time in his career he’s gone over 40 points in a season.

Last season, Coyle and Hall struggled to generate chemistry when playing together. They spent a little over 282 minutes of time on ice together last season at 5-on-5. In that time, the team was outscored 16-13. This season, when they’re on the ice together, they are not only keeping opponents out of their own net but getting quality shots on goal as well. In over 69 minutes of time on ice together, the Bruins account for 62.7% of shots on net over opponents. It’s part of the reason Hall is having the offensive success he is in fewer minutes, and it wouldn’t be possible without Coyle.

As the two gain even more comfort and familiarity with each other’s playing styles, it is entirely possible for this to become the best third line in the league. If anything can be learned from the Tampa Bay Lightning’s recent Stanley Cup championship runs, it’s that the third line can truly be the ultimate difference maker. Their championships, particularly the 2021 win, were largely on the backs of their third line. If the Bruins can replicate that success, there’s no reason they can’t find postseason success.

Frederic is the wild card and unexpected success story of this line. Going into this season, it was clear that it was going to be an important one for him. The 24-year-old has struggled to live up to the expectations of being a first-round selection. He’s mainly been a bottom-six bruiser in his young career so far and has struggled to generate offense and avoid taking bad penalties. He was never quite able to find the right place for himself in former head coach, Bruce Cassidy’s system. Going into this season with a new coach, the hope was that a change would be able to really get something going for him.

It wasn’t the most auspicious of starts with him struggling throughout the preseason and missing some games early in 2022-23, but Frederic has turned it around in the last few weeks, particularly since moving to the third line with Coyle and Hall. In Wednesday’s win against the Colorado Avalanche, his chemistry with his new line was on full display, particularly in the goal he scored.

The passing is crisp. The spacing is great. The awareness of each other on ice is truly excellent. Playing with Coyle and Hall has been the most comfortable Frederic has looked in his young NHL career.

He is well on the way to setting career highs in goals, assists, and points. In 23 games so far, he has six goals and five assists for 11 total points. Last season, the best of his career, he had eight goals, 10 assists, and 18 total points in 60 games. He’s playing with more confidence and it shows. He’s taking more shots, the team has outscored opponents 17-4 at 5-on-5 when he’s on the ice. Barring any injuries or a serious setback, Frederic will easily surpass those totals.

Another important note when regarding Frederic is that he only has 18 penalty minutes so far in 2022-23 and has only registered two minutes in his last five games. He’s on pace for 64 penalty minutes in 82 games, a departure from the 65 he had in 42 games in 2020-21 and the 57 he had in 60 games last season. Since moving to the third line and playing with Coyle and Hall, there are fewer moments of him taking bad penalties to make up for his own struggles on the ice, further demonstrating his comfort with his new linemates and the increased confidence it’s bringing to his game.

As most people know at this point, the depth scoring has really held the Bruins back the last few seasons. If Patrice Bergeron, Brad Marchand, and David Pastrnak weren’t scoring, no one else was really stepping up to win games. But so far in 2022-23, the depth finally seems to have arrived, and it has largely come from guys like Coyle, Hall, and Frederic, who are not new additions but are finding the right line chemistry and building confidence in their play to bring out the best in their games.

Even in this past week’s overtime loss to the Vegas Golden Knights and regulation loss to the Arizona Coyotes, they are still getting contributions from throughout the lineup. Both Hall and Coyle scored goals in those losses. You can’t win every game, especially against tough opponents, but the Bruins are still demonstrating great fight, even in those losses. This is a team to be excited about, which is not something anyone was saying five months ago, and a large part of it is due to the depth guys stepping up.

As the past few seasons in particular have shown, offensive depth wins championships. It’s what the Bruins have lacked the past few seasons and gotten them eliminated from the playoffs. If Coyle, Hall, and Frederic continue to shine on the third line, they could really be the difference-maker between another early exit in the playoffs and a legitimate Stanley Cup run.