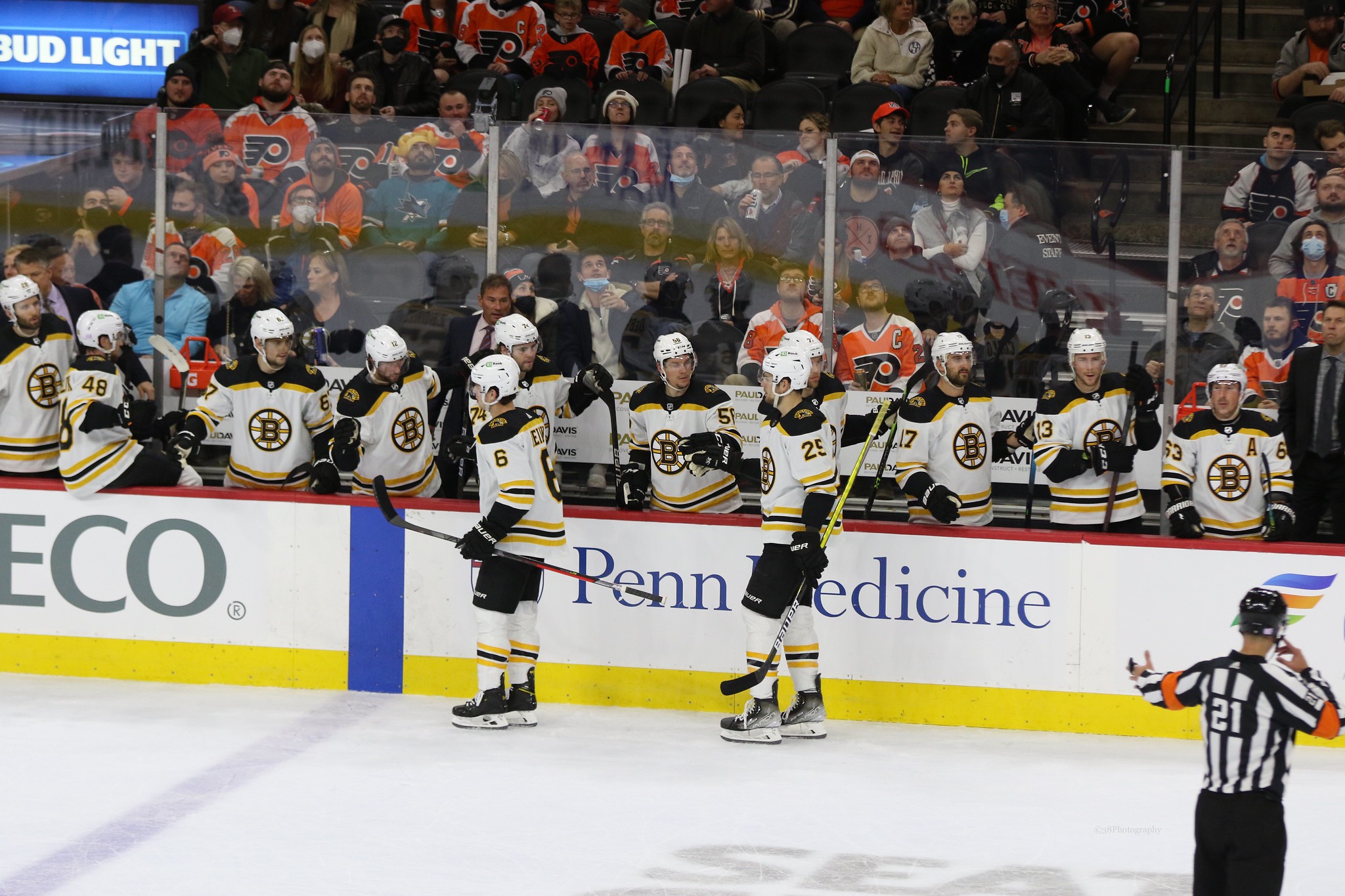 Ten games in, and the Bruins are four points clear of the *checks notes* New Jersey Devils, Buffalo Sabres, and New York Rangers for the top spot in the Eastern Conference. Boston has a one-point lead on the way to an early Presidents Trophy race over former Bruins’ coach Bruce Cassidy and his new squad, the Vegas Golden Knights. Not even the most optimistic Bruins fan would have said they expected such a start.

Let’s not forget, this is a team who entered the season missing two of their top four defensemen. They were also without their top left wing and brought in a new head coach. Oh yea, and their top-line center was undecided on whether he wanted to retire or opt for elbow surgery in the offseason, while the second-line center took the last year off to play in his native Czechia. So, there are a few reasons without thinking too hard about why the team was hoping to just stay afloat at the beginning of the year. They’ve done that and more. So, let’s revisit some of the preseason storylines and see what they turned into now with meaningful games under the Bruins’ belt.

Charlie McAvoy and Matt Grzelcyk both underwent shoulder repair surgeries in the weeks following the Bruins’ playoff exit at the hands of the Carolina Hurricanes. Their recovery timeline circled November as an optimistic timeframe, with December as a safe fallback. Grzelcyk blew this assumption out of the water, returning to play on October 20 against the Anaheim Ducks. He didn’t just return in the background either, recording an assist in each of his first three games back.

McAvoy has taken more time, still holding onto that November timeframe with the coaching staff anticipating his return by Thanksgiving. He has been a full participant at practice, shedding the non-contact sweater of the past few weeks and joining the team on their current road trip to continue gaining valuable reps in anticipation of an imminent return.

Up front, Brad Marchand underwent double hip surgery. In a move that is set to extend his career, Marchand was targeting a similar timeline to return as McAvoy and Grzelcyk. Thanksgiving seemed hopeful; December was more likely. Instead, on October 27, Marchand made his triumphant return to the ice in front of the home crowd. Just like Grzelcyk, this return was not merely ceremonial. Over a month ahead of “schedule” (more on that in a second), Marchand assisted on the first Bruins goal, then added two goals to his name.

Now to return to the ahead-of-schedule comment. All offseason and even into October, the news would trickle out about Marchand feeling good and being slightly ahead of schedule. To most of us on the outside, that made a late November timeframe seem more likely than a December return. In Marchand’s world, this was an elaborate ploy. Following his return, Marchand elaborated that he had circled the October tilt against the Detroit Red Wings as his ideal return date from the beginning. Whether that was achievable remained to be seen, hence the messaging going to the fans and outside world remaining focused on a November return. To the surprise of nobody, Marchand has once again exceeded expectations and returned to form.

Following the loss to the Canes, Bruins management decided to move on from Bruce Cassidy. Following an extensive search, Jim Montgomery was brought in. In preparing for the season, Montgomery laid out his plans to play a style more in line with what management wanted, one with greater creativity, more involvement for the defensemen, and one that would produce greater offensive looks. These quotes were taken with a grain of salt because every coach wants to do these things, but not every coach can successfully implement these systems.

Early on Montgomery’s systems showed a Jekyll and Hyde approach. The Bruins found plenty of offense, scoring at least five goals in each of the first four games. The problem? In each game, the Bruins would storm ahead, give up a lead, and have to fight back to win the game. The wins were great, but the process felt like a rollercoaster, giving fans the highs while also hitting them with the lows.

These early kinks seem to be ironing themselves out as the team becomes more familiar with Montgomery’s style and each player’s responsibility. Of the last six games, four opponents have scored one goal or less. Offensively, Boston has scored two goals once, three goals once, four goals twice, five goals three times, six goals twice, and even seven goals once. That is a level of offense last year’s Bruins were not operating at.

On the stat sheet, this offense is being spread around evenly. David Pastrnak is having a monster year, leading the team with 18 points, but second on the team? Hampus Lindholm. The defenseman has 11 points while logging heavy, top defenseman minutes. 13 different Bruins have over 4 points this season, including depth options like Connor Clifton, A.J. Greer, and Charlie Coyle.

Nick Foligno could also be added to this list. The fourth-line wing, who many (including myself) were trying to ship out all offseason to clear cap space, has already cleared last season’s goal total and has rediscovered his forechecking tenacity. With five points, playing in every situation, and providing leadership down the lineup, he has shown management made the right choice in holding onto him. Similarly, Montgomery was right when he said he felt he could unlock the Foligno of old.

David Krejci was the Bruins’ big off-season signing. He was a free agent, but a unique one in that he left Boston to return to Czechia and play for his hometown team HC Olomouc. After a year back in Europe, Krejci returned to Boston as a 36-year-old one year removed from competing against NHL talent. Could he really reinsert himself back into this league, centering what would start the year as the Bruins’ top line in everything other than name? There was a reason for apprehension, even with his strong season in Czechia and international tournaments with the Czechia national team.

Although he has missed the last two games to injury, Krejci still stands at a point per game player. So yes, he can step away and slot right back into a top-line role. His chemistry with David Pastrnak has been as advertised. When Pavel Zacha occupied the other wing, the Czeching Line dominated play, providing three-zone coverage for Montgomery. When Zacha was moved out for Taylor Hall, the Hall-Krejci-Pastrnak combination met every expectation fans and management could have had. They provided another scoring line that has firepower at all three positions. This line has been paced by Pastrnak’s goal-scoring, but Krejci has added two goals himself, with Hall contributing five more.

The Bruins are off to their best start in franchise history. That means the 2022-23 team is doing things no team in over 95 years has done. That’s impressive. It’s also likely unsustainable. A .900 winning percentage? That won’t happen. But this Bruins team is good. Very good, I would go so far as to say. Montgomery has the team playing together while remaining loose and fun.

On top of all that, this team is getting healthier. McAvoy should be back on the ice in the next two weeks, and although other injuries are popping up, notably Krejci, Derek Forbort, and Jeremy Swayman, the Bruins have the depth to weather the storm. I have heard anecdotally from a few locals that this team just feels different. This depth and energy are key drivers of this optimism.

While the preseason positioned the fan base to be unsettled and hopeful to remain in striking distance of a playoff spot, the regular season has flipped the narrative. The Bruins have seized the initiative, jumping to an early lead in the Eastern Conference, and look to continue this strong start into a strong season. Given what the team has gone through, so far, there is plenty of reason to believe this is not only possible but even probable.

Vince Reilly covers the Boston Bruins for The Hockey Writers. Vince graduated from Grinnell College with a Bachelors in History and Political Science and earned a Masters in Sports Administration from Belmont University. He has worked in the Predators Front Office on Analytics and Operations, with Major League Baseball in Replay, and now with Tufts University as a Director of Hockey Analytics. Vince can always be found with a coffee in hand and he promises his sarcastic tone will always shine through his work.