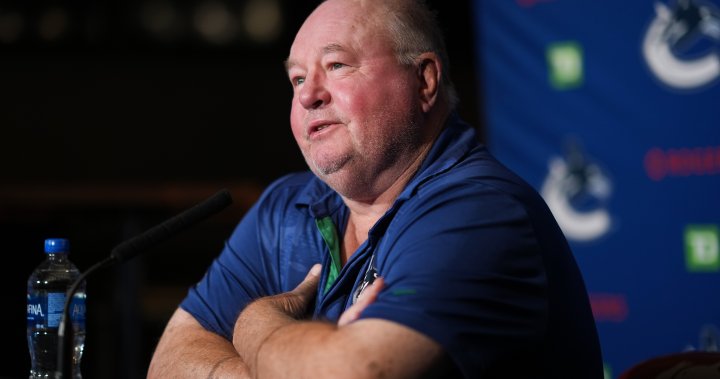 When Bruce Boudreau finally got his first chance to be an NHL coach with Washington in 2007, he took over a staff with only a few assistants.

George McPhee told Boudreau to coach the way he wanted to coach and he’d be there a while.

Boudreau did that, helped the Washington Capitals make the playoffs four times and has spent the bulk of the past 15 years working the same magic around the league.

Now with the Vancouver Canucks, Boudreau last week became the second-fastest coach to reach 600 wins, doing so in his 1,049th regular-season game.

Along the way, Boudreau has adapted with the changing face of hockey.

“With video and everything and analytics and everything, I think everybody’s changed a little bit,” Boudreau said. “There’s a lot of different dynamics that go into the game right now.”

Boudreau’s coaching dynamic has largely stayed the same. As an offensive playmaker in his younger days, he wanted the responsibility to make plays and gives his players now the same trust.

“He gives them the freedom to make plays, in the offensive zone in particular, and wants guys to be able to use their skill level and talent,” veteran defenceman Luke Schenn said.

“He gives you the ability to make plays when it’s given. Guys are going to make mistakes at times. He’s not going to come and chew you out all the time. Guys know what the expectation is, but he doesn’t need to harp on guys.”

5:57
Fighting the odds to make it to the NHL


That style is part of what endears Boudreau to players. Not that he, like most coaches, can’t wear on players when things aren’t going well — and Vancouver’s 2-5-2 start is a challenge — but the hockey lifer also earns respect by valuing what his players and staff do away from the rink.

“You can’t ask for much more from a coach than to have everybody’s back, and you want to have your coach’s back when he has your back.”

A big part of having Boudreau’s back is stringing together some victories.

When Boudreau was on the verge of being the fastest coach since Hall of Famer Scotty Bowman (1,002 games) to 600 career victories, he was thinking much more about getting Vancouver’s first of the season.


Boudreau, now 67, is in the second year of a two-year contract and it will take many more wins to get the Canucks in the playoffs. But history is on their side: Of the 10 full NHL seasons Boudreau has coached, his team has made the playoffs in nine of them.

His players want to get there — and get him there for at least a chance at his first Stanley Cup.

“You want to win for him,” Horvat said. “You want to play hard for him, and you want to run through a wall for the guy.

“I think that’s a good quality to have in a coach, and everybody in this room loves him, so we just got to start winning for him.”

Jesper Bratt was almost a point-a-game player last season for the struggling New Jersey Devils. That didn’t stop him from spending the offseason trying to get faster and stronger.

Bratt also worked with longtime skills coach Taro Nihei on his shot, which was a point of emphasis from the coaching staff early this season after the Swedish forward passed up some opportunities.

“We’ve been playing some good hockey and it’s been exciting and, obviously, it comes from a lot of years with really hard work,” Bratt said.

“Started feeling probably last year that I took my game to the next level and wanted to continue to do that and worked really hard this summer. The points have been coming in so far.”

So have the points for the Devils, who started 6-3-0. Bratt has been a big part of that and kept up his success even after New Jersey lost two-time Cup-winner Ondrej Palat to injury.

Bratt, who also skates with skills coach Daniel Broberg as part of his year-round preparation, is in a contract year after signing a $5.45 million deal for this season. If he keeps this up, his salary could go upwards of $7 million annually.

But the 24-year-old knows this is just the start and he’ll have to keep it up.

“Most of it comes from hard work and attention to detail and staying on top of pucks and playing well without the puck,” Bratt said

“That’s usually what leads up to some good games. I always try to make a difference for the team every time I’m on the ice.”

The reigning Cup champion Colorado Avalanche will face the Columbus Blue Jackets for two games in Tampere, Finland, on Friday and Saturday in the latest chapter of the NHL’s Global Series.

“It’s going to be fun, for sure,” said Avalanche forward Artturi Lehkonen, who is Finnish. “Playing in Finland doesn’t happen that often, so for them to see the NHL again too, it’s going to be a lot of fun.”

It’s also a chance for Colorado, which has lost five of its first nine games, to get away a bit and bond by spending the week in Europe.

“It’s good for us,” coach Jared Bednar said. “We’ve got a lot of new players. The start of the schedule’s been a little strange, but I think it’s good for our team to get out on the road here.”

GAME OF THE WEEK

ANALYSIS: More treats than tricks for Winnipeg Jets in October