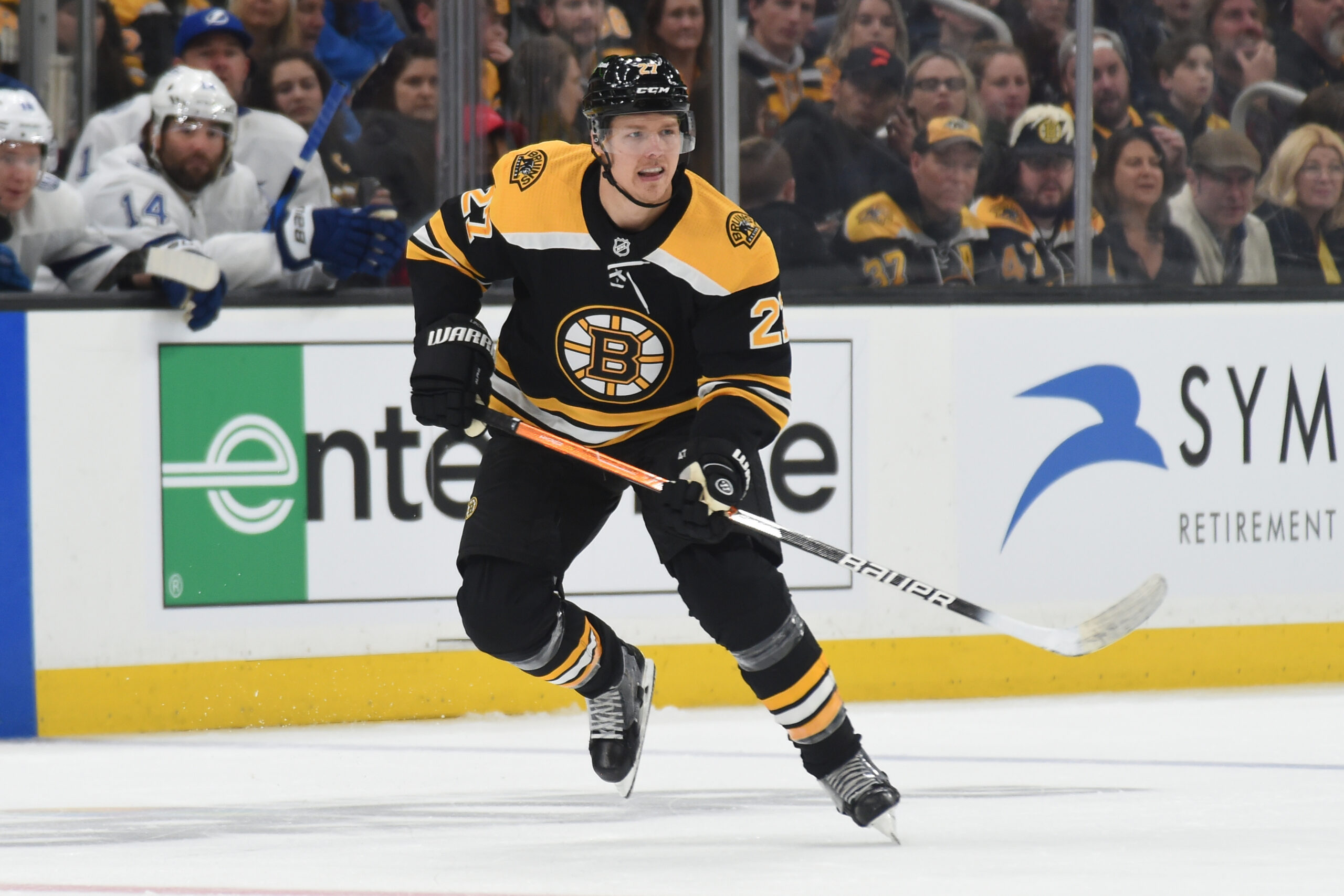 There is a lot that has gone right for the Boston Bruins this season. They’ve set the NHL record for home wins to start the season. A large portion of the roster, including Linus Ullmark, David Pastrnak, and Hampus Lindholm, are all on pace for career years. They’re first in the league, exceeding expectations from the offseason when many assumed they would just squeak into the postseason like they did last season.

Considering that the roster from last season to this season is largely the same, it was no wonder that people didn’t have the highest of expectations for the Bruins going into 2022-23. This year though, the lineup is clicking in ways it was unable to do so last year. The offensive lines and defensive pairings are gelling, and the guys are playing to the fullest of their abilities. With a new head coach in Jim Montgomery, this is a team that has completely bought in and believes that they can be something really special.

General manager Don Sweeney has gotten a lot of (deserved) flack over the years, and even this season, with everything going well, decided to make an insanely idiotic move. But, credit where credit is due, this current roster is composed of a great combination of guys that came from free agency, trades, and at the draft, many of which occurred under Sweeney’s tenure. The Bruins’ roster is finding success this season out of players from all three areas.

In 2021, the Bruins had two major contracts coming off of their books: David Krejci and Tuukka Rask. This created a little over $14 million in cap space alone, giving Sweeney a lot to work with. He subsequently signed Erik Haula, Derek Forbort, Nick Foligno, Tomas Nosek, and Ullmark. Needless to say, they did not seem like a great class of free agents at the end of last season and arguably the best of that group, Haula, was swapped for Pavel Zacha in a trade this past summer.

But, this year has been an absolute revelation for this group. Foligno has completely turned it around from last season and has been a reliable, solid fourth-liner in 2022-23. He has five goals and 14 points in 29 games and is a plus-7. Last year he had only two goals and 11 points in 64 games and was a minus-13. As mentioned above, Ullmark is having the best season of his career and currently leads the NHL with 17 wins so far this season, and finally, Forbort has been instrumental on the penalty kill. They had one of the best units in the league with him on the ice and dropped down to 20th when he was out for several weeks with a finger injury.

The 2021 free-agent signings have found their rhythm in 2022. Each of them has found ways to make positive impacts, even Nosek who has struggled the most out of this group so far this season.

Another free agent who has been impactful is AJ Greer. His signing this past summer did not bring a lot of fanfare or attention. But after a phenomenal training camp and preseason, he earned a spot on the roster. While he has mainly been used in a limited role, he makes the most out of his chances. The large winger has three goals and seven points in 22 games and is a plus-2 while averaging less than 10 minutes of ice time a night.

It’s been said before and it’ll be said again, but the Bruins have found success this year because everyone is buying in and playing their part. While these may not have been the biggest free agent signings fans may have wished for, they have all played their part in the team’s wins so far this season.

Several recent trade acquisitions are making tremendous impacts on the 2022-23 season. The one that stands out the most is obviously Lindholm. The 28-year-old defenseman is on pace to have one of the best seasons of his career. He’s a plus-20 with four goals and 21 points in 30 games, which puts him on pace for roughly 57 points this season. This would crush his previous season-high 34 points, which he scored back in the 2014-15 season. He’s been a difference-maker this season, particularly at the start with Charlie McAvoy absent. He’s averaging over 24 minutes of ice time a night and should be a contender for the Norris Trophy at the end of the season.

Taylor Hall is someone Sweeney got in an absolute robbery of a trade back at the 2021 Trade Deadline, and has really hit his stride this season. The former first-round pick has been a solid, reliable presence on the third line in recent weeks, and one of the most important contributors to the increased depth on offense this year. The 31-year-old has 13 goals and 25 points in 30 games and has helped reinvigorate a bottom six that has been weighing down the team since their 2019 Stanley Cup Final appearance.

Other notable players acquired by trade in recent seasons are Charlie Coyle, who’s had his ups and downs with the Bruins but has been solid in the third-line center position this season, and Zacha, who finally looks to be living up to his potential since his trade from the New Jersey Devils this past summer. In the past few seasons, the Bruins have certainly won more trades than they’ve lost.

From a Bruins’ strength, we turn to their weakest area, drafting. Much has been written about Sweeney’s draft failures, the weakness of the Bruins’ pipeline, and the struggle to develop players. Still, they haven’t completely fumbled the ball on every draft.

McAvoy is easily the best draft selection of Sweeney’s tenure. He was taken 14th overall in the 2016 NHL Draft and has turned into a cornerstone of the Bruins’ franchise. He’s been the perfect addition to the long line of successful franchise defensemen in Boston, including his former defensive partner Zdeno Chara. He’s in the first year of an eight-year contract that carries a $9.5 million average annual value (AAV). He should hopefully have a long and successful career in the black and gold.

Additionally, Jake DeBrusk has been a solid winger this season after many ups and downs to start his career. He’s part of the much-maligned Bruins’ 2015 Draft class, but has certainly proved to be a great goal scorer. He has 11 goals in 29 games so far in 2022-23, putting him on pace to reach 30 goals for the first time in his career.

Other Sweeney draft picks playing on the current roster are Brandon Carlo, Trent Frederic, and Jeremy Swayman. Carlo has had a quiet season so far after missing some games early on with a concussion while Frederic, who has been inconsistent and a bit of a reckless player in his NHL tenure so far, has been playing the best hockey of his NHL career in recent weeks. Swayman has had his struggles this season, but still has a bright future ahead of him and will hopefully be a Bruin for a long time.

While he may have missed in the draft more often than fans would like, Sweeney has certainly made at least a few good decisions that are paying off in the 2022-23 season. Of course, the team is also still benefitting tremendously from players drafted and developed within the organization prior to the current front office. Patrice Bergeron was a second-round selection in the 2003 Draft and the captain continues to lead the way on and off the ice. Brad Marchand will go down as one of the best players to come out of the fifth round of an NHL Draft and currently has 23 points in 22 games. Last but not least, Pastrnak, selected by the team in the first round of the 2014 Draft, has 42 points in 30 games and is on pace for 114 points, which would be the first time in his career that he has hit over the 100-point mark.

The Bruins’ current roster has truly been constructed well through all three areas: free agency, trades, and drafting. While there have been plenty of misses in the draft, they have been able to find some cornerstones, even during Sweeney’s tenure. Trades have also garnered several big names and important players in Hall and Lindholm. Finally, in free agency, they’ve been able to bring in additional pieces to round out the team.

For a team that looked past its prime at the end of last season, they truly look like a whole new team in 2022-23 despite having a very similar roster. They’ve had some struggles in recent weeks and need to clean things up, but the Bruins are no doubt a serious contender. They next play on Monday, Dec. 19 against the Florida Panthers at home.