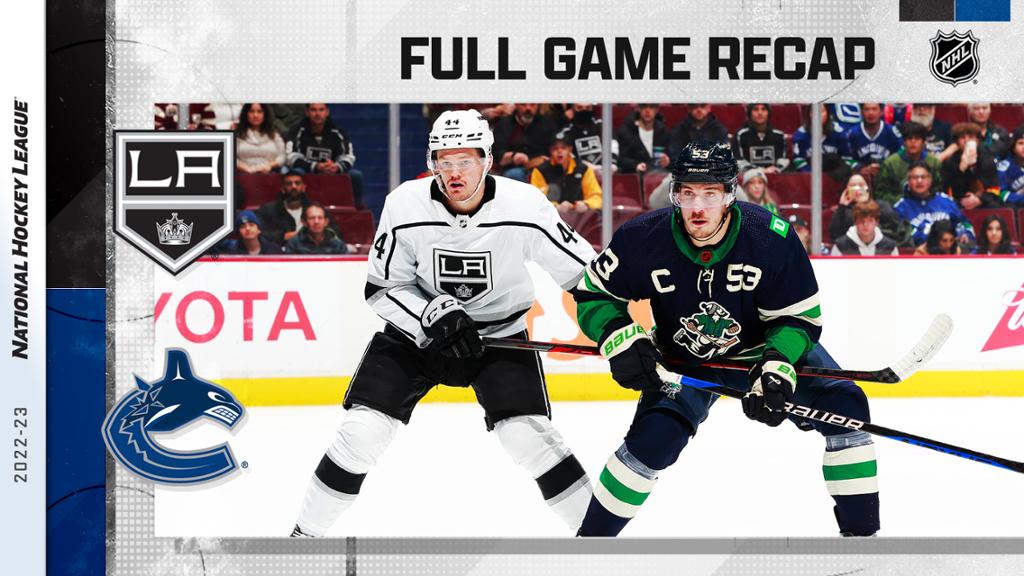 VANCOUVER — Brock Boeser scored his first two goals of the season for the Vancouver Canucks in a 4-1 win against the Los Angeles Kings at Rogers Arena on Friday.

Boeser entered with nine assists in his first 11 games. He has seven points (two goals, five assists) in a six-game point streak.

“A little weight off my shoulders,” Boeser said. “Anytime you have a goose egg and you’re supposed to score and help the team win hockey games and we’re not winning hockey games, it weighs on you. That’s what I get paid to do, so I’ve got to make sure I continue to find ways to put the puck in the back of the net.”

Elias Pettersson also scored twice, and Thatcher Demko made 37 saves for the Canucks (6-9-3), who won consecutive games for the second time this season. Andrei Kuzmenko and Quinn Hughes each had two assists.

“I think for the most part, it was our best game of the year,” Vancouver coach Bruce Boudreau said. “Our first period was excellent. Obviously they had pushes and they’re a good team, so when you’re behind you do make pushes, but I thought we held on really well and I thought our goalie was really good.”

Blake Lizotte scored, and Jonathan Quick made 21 saves for the Kings (11-8-1), who are 1-2-0 on a four-game road trip that concludes Saturday at the Seattle Kraken.

“For as much as you’d like to always keep your team together and not separate it, I thought there were some individuals that let us down tonight rather than the group as a whole,” Los Angeles coach Todd McLellan said. “Sometimes you have to play the game a certain way and it might not be the way you like it. It might be ugly, it might be grinding, it might not be cute, but that’s the way you have to play it, and we had some that couldn’t accept that or didn’t want to, and that cost us.”

After the Canucks allowed the first eight shots in the second period, Pettersson gave them a 1-0 lead at 5:40 with a wrist shot from just inside the top of the left face-off circle that went in between Quick’s pads.

Boeser scored his first goal of the season on a power play at 10:09 to make it 2-0, redirecting a shot pass from J.T. Miller at the edge of the crease.

“We talked lately about if we score or they score, we need to respond no matter what, not sit back,” Pettersson said.

Boeser scored again at 5:07 of the third period, batting a puck out of the air behind Quick after he made the initial save against Sheldon Dries for the 4-1 final.

The goal came off a 4-on-2 rush after the Kings got caught up ice.

“It’s just decision making, really,” Los Angeles captain Anze Kopitar said. “There’s a couple plays where we didn’t take care of the puck and it turned out to be in the net. Got to correct that.”

Demko made 16 saves in the third for just his second win of the season (2-8-2). The Canucks were outshot 34-18 over the last two periods.

“[Demko] has taken a lot of heat this year, but he was the one that sort of made the difference in the game and that’s great,” Boudreau said. “When you get good goaltending, usually everybody else is playing well too.”

“We had some good looks, but it’s a matter of capitalizing,” Kopitar said.

NOTES: Canucks forward Curtis Lazar returned after missing 10 games with a hand injury. He had seven hits in 11:41 of ice time and drew the cross-checking penalty against Kings defenseman Sean Walker that led to Boeser’s first goal. … Miller extended his point streak to four games (three goals, one assist). … Los Angeles defenseman Alexander Edler had an assist, his third in four games. … Kings goalie Cal Petersen, who made 22 saves in a 3-1 win at the Edmonton Oilers on Wednesday, is expected to start at Seattle on Saturday in the second of a back to back.