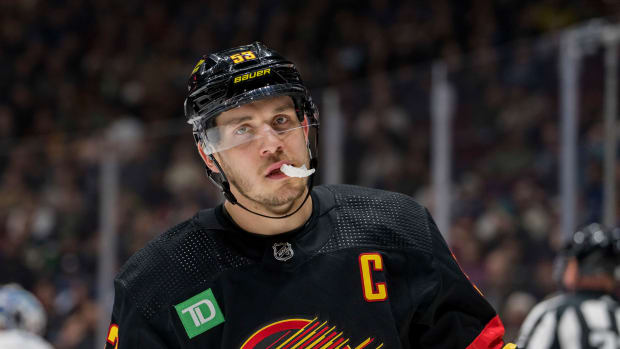 Vancouver Canucks hockey operations president Jim Rutherford hinted on Monday that some potentially unpopular changes could be coming to his struggling roster. That prompted speculation that he was referring to pending free agent center Bo Horvat.

TSN’s Pierre LeBrun reported the Canucks have spoken with pretty much every contender about their high-scoring captain. That includes the Carolina Hurricanes, though they don’t usually spend high on potential playoff rentals. He indicated the Canucks seek a young center as part of a multi-asset return, but the Hurricanes won’t part with Martin Necas.

The Athletic’s Eric Duhatschek and Michael Russo mentioned the Boston Bruins, along with the Hurricanes and Colorado Avalanche, as potential fits for Horvat. Boston Hockey Now’s Jimmy Murphy cited an NHL source claiming discussions between the Bruins and Canucks had picked up recently.

Murphy’s source believes a potential Bruins trade package for Horvat would have to include top prospect Fabian Lysell and a first-round pick. He also included the Detroit Red Wings and Seattle Kraken among those with a potential interest in the Canucks star.

Vegas Hockey Now’s Owen Krepps suggested the possibility of the Golden Knights getting into the bidding for Horvat. Vegas captain Mark Stone is week-to-week with an upper-body injury, prompting Krepps to suggest they could free up $9.5 million if Stone ends up on long-term injury reserve before the March 3 trade deadline.

Meanwhile, Postmedia’s Michael Traikos included the New York Rangers, New York Islanders, Los Angeles Kings and Pittsburgh Penguins as possible trade partners. He wondered if an offer of a first-round pick, a high-end prospect and a young NHL player would be too much or not enough for Horvat.