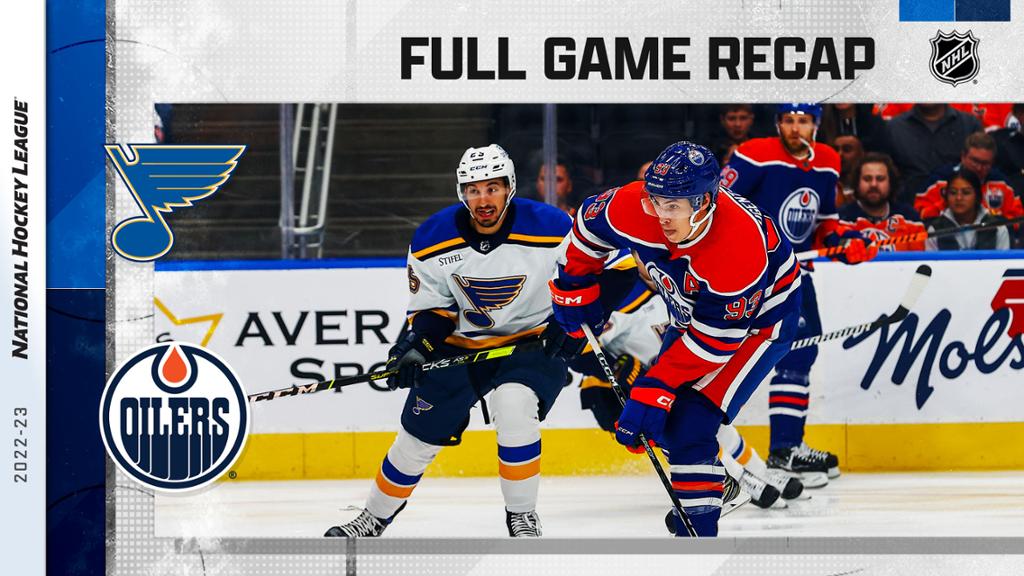 EDMONTON — Jordan Binnington made 23 saves for the St. Louis Blues in a 2-0 win against the Edmonton Oilers at Rogers Place on Saturday.

Torey Krug and Justin Faulk scored for the Blues (3-0-0), who are the only undefeated team in the NHL. Binnington got his 11th NHL shutout and first of the season.

“It was a good afternoon in Edmonton,” Binnington said. “We have a good team and worked both ways, we did a great job tonight, a full 60 minutes. We were disciplined and it was good to find a way to win in these tight games too.”

Jack Campbell made 20 saves, and Connor McDavid had a four-game point streak end for the Oilers (2-3-0).

“It was two good teams in a tight-checking game,” Edmonton center Leon Draisaitl said. “They scored two goals and we couldn’t get one. They are a good team, that’s a playoff team. They have won before, they know how to play a tight-checking game. So did we, I thought, for the most part. But we were a little sloppy in some areas.”

Krug gave St. Louis a 1-0 lead on the power play at 5:04 of the first period when he stepped into a pass from Vladimir Tarasenko and one-timed it from the point. St. Louis limited Edmonton to five shots in the period.

“It was a real good effort by everybody on the team,” Blues coach Craig Berube said. “I think we limited their rush attack by having a good [third forward] in tight. We checked tonight, that was the difference and our special teams were 100 percent (1-for-1 each on the power play and the penalty kill).”

St. Louis had a chance to extend the lead at 12:04 of the second period following a giveaway by Edmonton defenseman Brett Kulak behind the net. Ryan O’Reilly knocked the puck down at the right side of the net and slid it in front to Jordan Kyrou for a one-timer, but Campbell got his pad on it.

“St. Louis comes with a certain style, right from the start, and you feel that right away,” Kulak said. “You know they are not going to play run-and-gun with you and just open things up. They are going to play a certain way and try to limit your chances and wait for you to make mistakes, so that is what they did tonight.”

Binnington made a glove save on Ryan Nugent-Hopkins‘ shot from the right face-off circle with 2:50 left in the second period after a setup by Draisaitl from behind the net, and Zach Hyman was unable to bat the rebound in out of the air. Edmonton outshot St. Louis 10-5 in the period.

“It was a 1-0 hockey game with a power-play goal against, in the first few minutes of the game,” Oilers coach Jay Woodcroft said. “I thought we had some good chances right off the bat that we didn’t score on, and then we took an O-zone penalty and it ended up in the back of our net. They made one more play than we did and they found themselves up 1-0 on the road. It was two good hockey teams that played a tight game and that one moment of the game led to us not winning it.”

Binnington made eight saves in the third period. He stopped Hyman from in close at 7:33, then made a glove save on Evander Kane from below the left circle at 8:52.

Faulk scored into an empty net from deep in his own end with 1:02 remaining for the 2-0 final.

“Whenever we have No. 50 [Binnington] in the pipes, there is always a chance of [a shutout],” Krug said. “But we had a great game plan, attention to detail. We got one early and we were able to shut out their time and space, and our guys did a great job.”

NOTES: The Oilers had averaged 4.0 goals per game entering Saturday. … Edmonton’s six-game homestand ends against the Pittsburgh Penguins on Monday. … The Blues have not trailed in a game this season. … Each team dressed 11 forwards and seven defensemen.