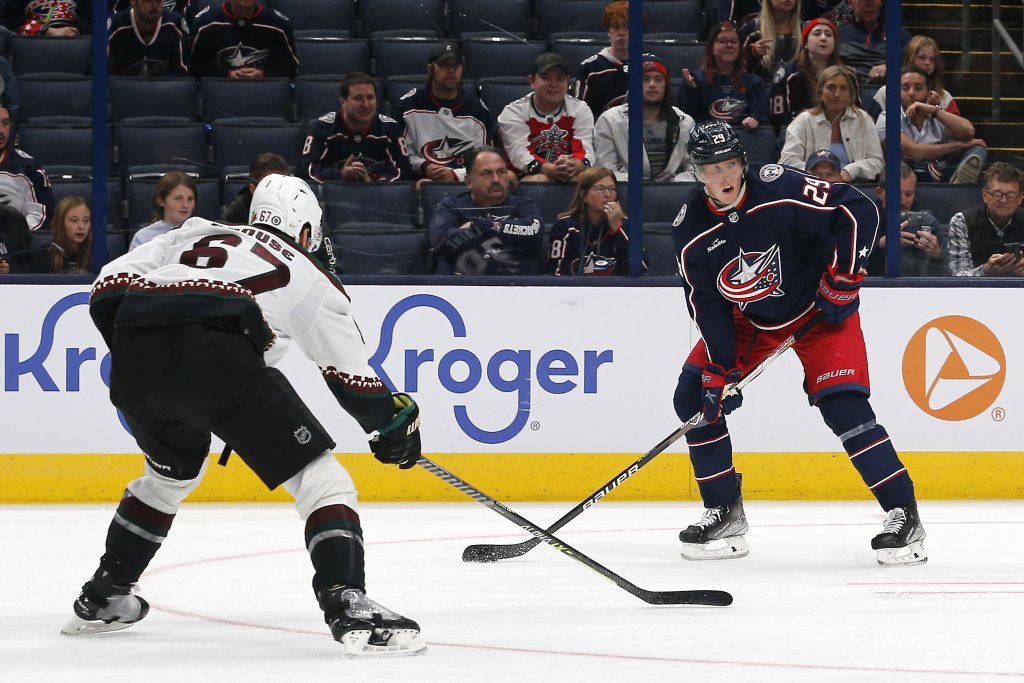 Both teams are off to slow starts as this game has an international twist. Columbus vs Colorado headlines a small two-game slate of NHL action. This is a neutral-site game from lovely Tampere, Finland.

The Avalanche lost 5-4 to the Islanders on Saturday night. Columbus comes here after getting routed by the New Jersey Devils on Sunday afternoon by a 7-1 score.

Columbus has had some issues defending this year. The Blue Jackets have allowed 44 goals while Colorado has yielded 27. There’s a good chance that this Blue Jackets vs Avalanche matchup may see some goals.

The Avalanche tops the Stanley Cup odds at +450 to win the Stanley Cup, while Columbus is down at +10000. Currently this contest features a total of 6.5.

Puck drop is set for just after 2:00 pm ET at the Nokia Center in Tampere, Finland with NHL Network providing the broadcast coverage in the States and Sportsnet showing it in Canada.

Columbus struggled mightily in New Jersey on Sunday afternoon. Elvis Merzlikins was under siege the entire game facing 53 shots in all. The Blue Jackets could not stop the Devils’ speed and forecheck. This resulted in a 7-1 loss that left everyone wondering in Columbus what would be next. The one bit of good news is that Columbus was heading overseas where they could get away from their 3-7 start to a point.

“The Columbus Blue Jackets currently have a 0% power play rate, failing to score a goal in 53 total minutes on a man advantage” :DD #NHLfi

At this point, the Blue Jackets just need to score goals and keep a few pucks out of the net. Their goal differential of -1.8 goals per game is one of the worst in the NHL. Columbus ranks just 26th offensively and 30th on defense.

Columbus managed only 21 shots on goal in New Jersey. Their lone highlight was Yegor Chinkarov scoring his second goal of the season. Every phase is a mess especially special teams and team defense.

The Colorado Avalanche are finding out what it is like to have the “Stanley Cup hangover”. Colorado started off the season with an easy victory over the Chicago Blackhawks. Nothing has come easy since. They come to Finland after consecutive losses to the New Jersey Devils and New York Islanders. Against New York, they squandered a three-goal lead in a 5-4 defeat.

In 7 Games, Val accumulated 12 points to kick off the season.

Hope we see him back on the ice soon!#GoAvsGo pic.twitter.com/j8lQiJ40HP

The problems with the Colorado Avalanche are pretty simple. Gabriel Landeskog is out another 12 weeks after having surgery. Valeri Nichushkin had 12 points in seven games but missed a couple of games. Losing Nazem Kadri to free agency looms a little larger now.

Ultimately, Cale Makar, Nathan MacKinnon, and Finnish native Mikko Rantanen will have to lead this team.  Makar (+200) is the favorite to again win the Norris Trophy. Colorado will need to average closer to four goals a night to win some games now.

The teams faced off twice last season, with Columbus winning both meetings including one in Colorado in overtime. Can Columbus win a third straight meeting on Friday afternoon?

The dilemma with overseas games is this. One expects “Result A” but “Result B” happens. For example, San Jose and Nashville opened the season in Europe and the Under connected in both games as Nashville won 4-1 and 3-2.  However, with Tampere native Patrik Laine and Nousiainen’s own Mikko Rantanen playing, there is a sneaky suspicion more goals are in the offing.

Normally, goals are more at a premium but Patrik Laine is going to want to put on a show in his native Finland. The last time Laine was in Finland was 2018 against the Florida Panthers. He scored a hat trick which sparked an 18 goal in 12 game November. Columbus is hoping for an ignition of their offense

At the same token, Colorado needs to reawaken their offense as well.

Make sure to browse all the available online sports betting sites to get the best odds on this prop.

A journalist veteran for over two decades, Chris has taught the gamut of fantasy hockey sports online from injuries to news to prospects, and more. He has bet on several sports and written sports betting articles about the NBA, MLB, NCAA football, the NFL, and NHL for USA Today.

A journalist veteran for over two decades, Chris has taught the gamut of fantasy hockey sports online from injuries to news to prospects, and more. He has bet on several sports and written sports betting articles about the NBA, MLB, NCAA football, the NFL, and NHL for USA Today.