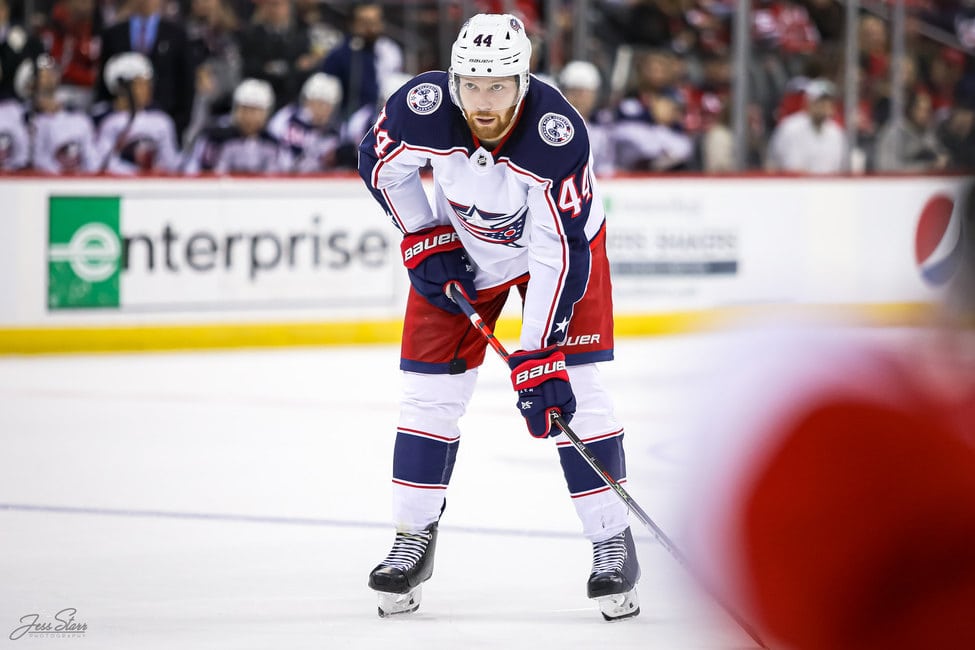 The NHL’s Christmas break means it’s unofficially time to start looking at the trade deadline as the next major milestone in the season. March 3 seems like a long way away, but when it comes to making massive trades, two months is not a ton of time. Make no mistake, general managers across the league are already talking.

Two teams that would make for good trading partners this year are the Columbus Blue Jackets and Edmonton Oilers. They are each at opposite ends of the spectrum. The Oilers are in win-now mode, presumably willing to make long-term sacrifices for short-term improvements, and the Blue Jackets have some rental players that they are looking to offload to gain assets in their rebuild. It’s a perfect fit. With that said, there’s one specific trade the teams should consider, let’s take a look at it.

What Is the Trade?

The Jackets have a couple of high-value players on expiring contracts that will draw attention. Let’s be bold and package them together in a deal with the Oilers.

From a value perspective, it seems fair to me. Looking solely at the returns from past Blue Jackets trade deadline deals, both Nick Foligno and David Savard drew a first-round pick in return. At this point in their careers, both Nyquist and Gavrikov have more offensive upside than the aforementioned Jackets at the expense of slightly less defensive prowess. I consider them comparables in value when lumped together.

The money works too, as Nyquist ($5.5 million) and Gavrikov ($2.8 million) have smaller contracts for the value they bring, and if you cut them in half with salary retention, their total number ($4.115 million) is offset by Puljujarvi’s cap-hit ($3 million). It also works if no one is activated off of Edmonton’s long-term injured reserve for a while. We’ve seen the proposal, now let’s look at how the trade benefits both teams.

Why it Works for the Oilers

The Oilers are looking to offload Puljujarvi, who just hasn’t been a fit in Edmonton. Considering Elliotte Friedman’s suggestion that this year will be his last in Edmonton, the Oilers would presumably rather trade him than lose him for nothing. The removal of his cap hit is also the only thing that makes this deal possible.

Oilers’ general manager Ken Holland has some familiarity with Nyquist. Holland drafted and developed the Swede in Detroit and knows exactly what he is capable of. He is an electric winger when he gets going, and at worst is a consistent, reliable player. Not an elite forward, but definitely a legitimate top-six player with strong two-way capabilities. He can also play in all situations and is especially useful on the penalty kill.

Gavrikov is far from a throw-in to the deal. He’s a legitimate top-four defenseman, who is particularly strong on the defensive side of the puck. He’s a bigger body at 6-foot-3 and 220 pounds, who would make the Oilers harder to play against. Since Zach Werenski’s season-ending injury, he’s been leaned on as the Jackets’ top defenseman and hasn’t looked out of place. However, he’s much more suited to a second pairing role. So, he would look great balancing either of the Oilers’ offensive defensemen in Tyson Barrie or Evan Bouchard.

Both of these guys make the Oilers deeper as they hunt for their first Stanley Cup in the Connor McDavid era. Depth on the wing has always been a problem for them, and Nyquist adds skill and experience to the position. The Oilers’ defense has been leaky at times through the early part of the year and Gavrikov adds reinforcement to the blue line. Both additions come at the expense of one roster player. Not bad.

Why it Works for the Blue Jackets

Let’s be clear, losing both of these players would be a huge loss for the Blue Jackets. Nyquist and Gavrikov are a huge part of the team’s leadership group, and the Jackets are a better team with them than without them. However, if management feels that they have to trade them, this is a good option.

Puljujarvi is a bigger-bodied forward at 6-foot-4, and he comes with a high draft pedigree as the fourth overall pick in 2016. When he was drafted, there was an incredible emphasis on his skill level, which has yet to translate to the NHL level. A change of scenery could be the catalyst for a breakout for the Finn. He hasn’t been all bad in his pro career, so far, with defensive prowess noted on his resume. Defensive ability at all positions is drastically needed in Columbus, and he fills that need.

The other thing that Puljujarvi brings is another option for Patrik Laine to play with. The two were absolutely dominant on a line together centered by Sebastian Aho at the 2016 World Junior Championship. Their line led the tournament in scoring, with Puljujarvi in first with 17 points in seven games, and Laine led in goals with seven and third in points with 13. Both were only 17 years old in the tournament traditionally dominated by 19-year-olds.

We’ve seen how familiarity between two players who played together in their youth can benefit a struggling top-round pick when Dylan Strome was reunited with Alex DeBrincat in Chicago. We’ve also seen in Sam Bennett how a change of scenery can benefit a fourth-overall draft pick who has fallen out of favour with his draft team. Puljujarvi to Columbus could be the right mix of factors to create a star.

As for the picks, an Edmonton first-rounder will likely be in the late 20s or early-30s, which is a place where some gems have been scooped before. The Oilers also have a few forward or center prospects that the Jackets may want to slide into their depth chart in guys like Xavier Bourgault or Raphael Lavoie.

So, in return for two top assets, the Jackets get a young player with elite potential, who is begging for a change of scenery. On top of that, they get a top pick and another pick or a good prospect. All of those pieces will come in handy for their rebuild.

In the end, it doesn’t seem likely to me that this deal gets pulled off. That’s because big trades like this never seem to happen at the trade deadline anymore. However, it would be cool to see these teams swing for the fences like this. But who knows, the flat cap environment could be the catalyst for a fun trade like this to actually come to fruition.

Writer covering the Columbus Blue Jackets for THW since August 2021.

Also, a radio personality and reporter currently based on Vancouver Island.