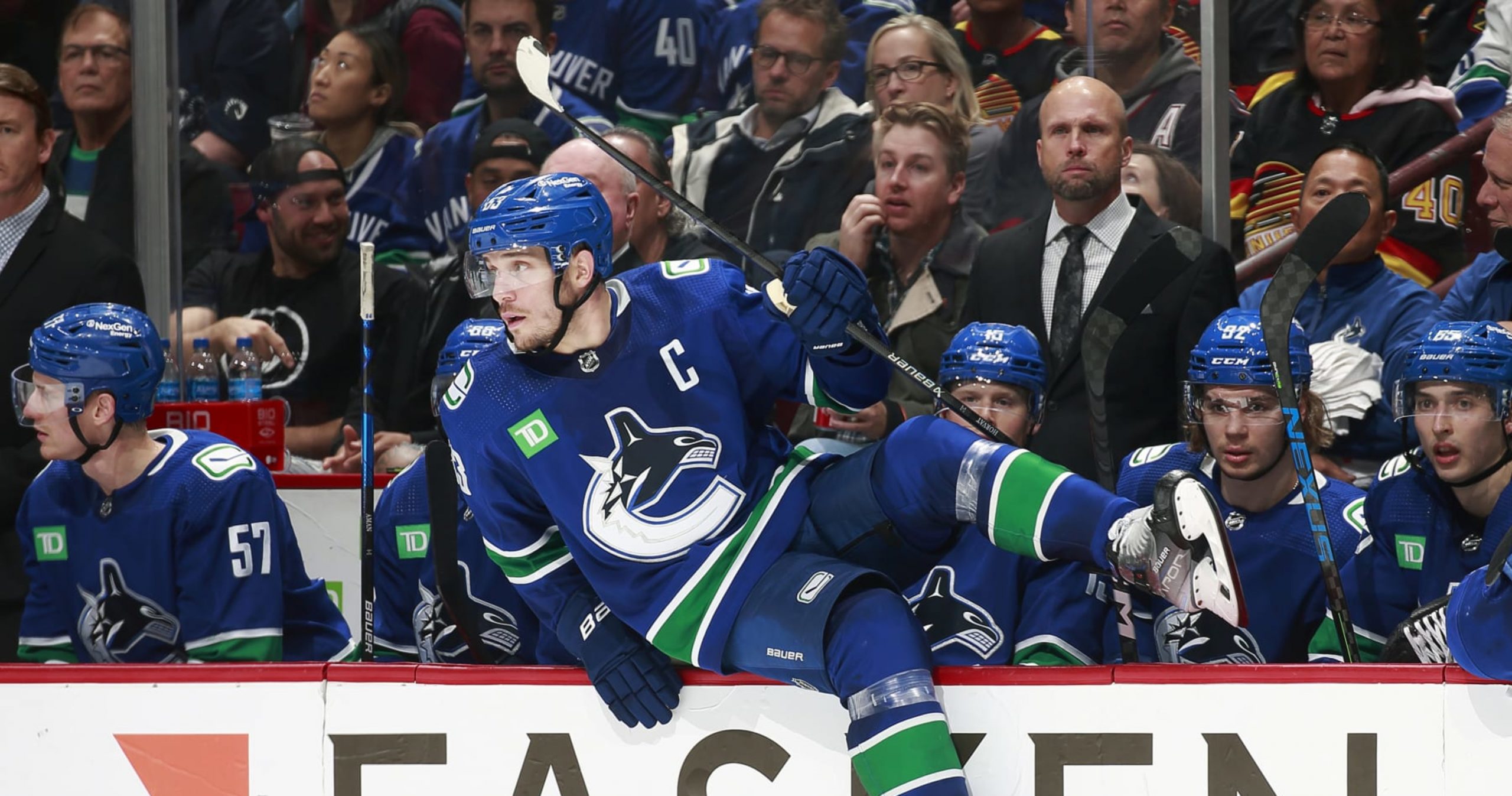 It’s been almost a month since the
NHL’s 2022-23 season began on Oct 7. Six trades took place in October, with the Vancouver Canucks involved in half of
them. They sent Jason Dickinson to the Chicago Blackhawks
for Riley Stillman and acquired Jack Studnicka from the Boston Bruins and Ethan Bear from the Carolina Hurricanes.

The low number of trades isn’t uncommon
at this stage in an NHL season. Most teams have limited salary-cap
space to take on additional players, plus many of them are still
evaluating their respective rosters’ strengths and weaknesses.

Despite the limited activity in the
trade market, several players have been the topic of trade
speculation. Some, like the Arizona Coyotes’ Jakob Chychrun, have
been a regular topic of media gossip for months. Others, such as the
Canucks’ Bo Horvat, have recently surfaced in the rumor mill.

Here are our 10 trade candidates for
the month of November 2022. This list is comprised of players who were featured in media rumors throughout October. They are ranked
according to talent, market value and the possibility of being traded
during this season.

Feel free to weigh in with your
thoughts in the comments section.

Patrick Kane’s eligibility next July
for unrestricted free-agent status plus the Chicago Blackhawks’
rebuilding process has made the 33-year-old superstar winger frequent
fodder for trade rumors. He could become the best player
available before the March 3 trade deadline.

However, there remains no certainty
that Kane will be traded. He carries a full no-movement clause in his
contract, giving him complete control over the situation. His $10.5
million salary-cap hit could also prove difficult to move given the
high number of teams lacking sufficient cap space to
acquire him.

On Oct. 17, The Athletic’s Pierre
LeBrun reported Kane and his agent intend to meet with Blackhawks
management around December or January to discuss his future. The
winger is taking a wait-and-see approach and isn’t being pressured by
management to make a decision.

Signing a one-year, $7 million contract
with the Anaheim Ducks on July 29, John Klingberg could be betting on
a solid season bolstering his value in next summer’s free-agent
market. As the rebuilding Ducks stumbled through October with a 2-6-1
record, the 30-year-old defenseman surfaced in media trade gossip.

On Oct. 11, Sportsnet’s Elliotte
Friedman predicted Klingberg could end up with the Edmonton Oilers by
the trade deadline. Three days later, the Hockey News‘ Adam
Proteau suggested Klingberg could become a more affordable short-term
trade option for clubs that tire of waiting for the Arizona Coyotes
to lower their asking price for Jakob Chychrun.

A week later, on Oct. 20, The
Athletic’s Pierre LeBrun reported Ducks general manager Pat Verbeek
didn’t rule out the possibility of re-signing Klingberg to a new
contract if there’s mutual interest in doing so. Nevertheless, LeBrun
didn’t rule out the blueliner becoming a trade chip for the Ducks by
deadline day.

It could come down to whether Klingberg
wants to remain part of a rebuilding team and if Verbeek feels his
performance merits a lucrative long-term deal. Klingberg’s
performance will also factor into whether he stays or goes by
deadline day.

This season is likely to be the last
for Jonathan Drouin with the Montréal Canadiens. The 27-year-old
winger is in the final season of his six-year contract and is
eligible to become an unrestricted free agent on July 1.

Injuries and illness have hampered
Drouin’s performance since he tied his career high for points (53)
with the Canadiens in 2018-19. He’s struggled this season for playing
time as forwards such as Cole Caufield, Josh Anderson and Kirby Dach
take on greater roles. Drouin’s been a healthy scratch in three of
the Canadiens’ first nine games this season.

That’s prompted conjecture that Drouin
could get moved before the March 3 trade deadline. On Oct. 12, the
Montreal Gazette‘s Stu Cowan speculated general manager Kent Hughes
could attempt to shop Drouin. His colleague, Pat Hickey, felt the
winger no longer fit with a club that is turning to younger talent.

Drouin will have to see more playing
time, however, to bolster his value in the trade market. With just
two assists in six games and a $5.5 million cap hit, he will be
difficult to move unless the Canadiens retain part of his salary.
Nevertheless, his status will be worth monitoring in the coming
weeks.

Entering October, it seemed only a
matter of time until the Edmonton Oilers traded Jesse Puljujärvi. The
24-year-old winger frequently surfaced as a trade candidate during
the offseason, with reports in September claiming the cap-strapped
Oilers were looking at moving him in a cost-cutting deal.

A month later, Puljujärvi is still with
the Oilers. On Oct. 3, Daily Faceoff’s Frank Seravalli reported they
lowered their asking price for the winger from a player to a draft
pick. However, he felt many teams didn’t believe they could get good
value for a player like Puljujärvi on a one-year, $3 million
contract.

The day following Seravalli’s report,
The Athletic’s Daniel Nugent-Bowman suggested the presence of
promising winger Dylan Holloway in the Oilers’ lineup could see
Puljujärvi moved sooner or later. However, he cautioned that it
wasn’t a good idea to shop him while his trade value was low.

Since then, the Puljujärvi chatter has
died away in the rumor mill. He remains a roster regular but only has
one point in his first nine games. That output could continue to hurt
his trade value and has sent him tumbling in our November ranking.

Arizona Coyotes defenseman Jakob
Chychrun has been a fixture in NHL trade rumors for months. However,
another Coyotes blueliner could also garner considerable interest if
he becomes available before the March 3 trade deadline.

After struggling in his final two seasons with the Philadelphia Flyers, Shayne Gostisbehere is
flourishing as a puck-moving defenseman with the Coyotes. He finished
fourth among their 2021-22 scoring leaders with 51 points. This season, the 29-year-old rearguard was their leading scorer in October with
eight points.

On Oct. 3, GOPHNX.com’s Craig Morgan
reported another strong performance by Gostisbehere could lead to him
getting shopped by the March 3 trade deadline. He’s in the final season of a
six-year deal with an average annual value of $4.5 million and lacks
no-trade protection.

Gostisbehere told Morgan he’d love to
remain in Arizona but understands he could be peddled by
the deadline. He’d be an enticing trade chip for clubs
seeking a rental defenseman with offensive skills.

Reilly had been placed on waivers on
Oct. 9 but went unclaimed. Matt Dolloff of Boston’s 98.5 The Sports Hub explained that enabled the
Bruins to send Reilly down to the minors three weeks later without
having to go on waivers again. Nevertheless, it raises the
possibility of the 29-year-old blueliner getting traded at some point
this season.

On Oct. 15, Boston Hockey Now’s Jimmy
Murphy speculated the Bruins’ logjam of left-shot defensemen could
make Reilly a trade candidate. With Charlie McAvoy scheduled to return
from shoulder surgery in December, Dolloff suggested Reilly could become the odd man out.

The Bruins probably won’t want a player
in return for Reilly for cap reasons. They could instead seek a draft
pick or a prospect in return. Whether they’ll find any takers remains
to be seen.

The Vancouver Canucks’ poor start to
this season forced management to seek help for their struggling
roster. They acquired center Jack Studnicka from the Boston Bruins on
Oct. 27 and defenseman Ethan Bear from the Carolina Hurricanes the
following day.

On Oct. 29, Sportsnet’s Elliotte
Friedman reported management told several players that more
roster changes could be coming if things didn’t improve. That could
stoke speculation about Bo Horvat’s future. The
27-year-old Canucks captain is in the final season of a six-year
contract with a $5.5 million cap hit. He’s set to become an
unrestricted free agent in July.

Three days before Friedman’s report,
The Score’s Josh Wegman suggested the Canucks will have to trade
their captain if he’s not under contract by the March 3 trade
deadline. The following day, the Toronto Star‘s Nick Kypreos reported
hearing the Canucks center rejected a lowball offer that wasn’t even
close to what comparable centers are making.

The Canucks entered November having won
two straight games after going winless in their first seven.
Conjecture over Horvat’s future will only grow if their struggles
persist throughout this month. A skilled two-way center with six
seasons of 40-or-more points on his resume, he’ll draw a lot of
attention if he becomes available in this season’s trade market.

A promising puck-moving defenseman,
Pierre-Olivier Joseph is hoping to stick with the Pittsburgh Penguins
after playing 20 games over the past two seasons. The 23-year-old
rookie has three points in eight games during October.

Joseph also surfaced
as a trade candidate leading up to the start of the season. On Oct.
5, Matt Vensel of the Pittsburgh Post-Gazette
speculated he could become the odd man out on their blue line as they
attempted to trim their roster and become cap compliant.

The Penguins resolved the issue by
demoting Ty Smith and Mark Friedman. Nevertheless, TSN’s Darren Dreger reported on Oct. 18 that Joseph was “out there” in the
trade market. Dreger suggested he might fit with clubs in need of
blue-line depth like the Toronto Maple Leafs and Montréal Canadiens.

Two days later, Daily Faceoff’s Frank
Seravalli reported he knew of teams that had made offers for Joseph
but the Penguins appear reluctant to part with him. Perhaps that
might change if they have to address a weakness elsewhere in their
roster. It makes the young rearguard’s situation worth monitoring in
November.

With 1,022 games on his resume, Wayne
Simmonds has enjoyed a long NHL career. However, the 34-year-old
winger finds himself the subject of trade rumors entering November.

Simmonds is no longer the strong
two-way winger he was in his prime but was brought in by the Maple
Leafs to add some toughness to their defensive game and experienced
leadership to the roster. However, he wound up on waivers before the
start of the season.

Though assigned to the Leafs’ AHL
affiliate after clearing waivers on Oct. 10, Simmonds stayed with the
club and skated with their injured players. The day before,
Sportsnet’s Elliotte Friedman reported the Leafs had informed the
other 31 clubs that Simmonds was available via trade. So far, they’ve
found no takers.

Simmonds is in the final season of a
two-year contract with an affordable $900,000 salary cap hit and a
10-team no-trade clause. He’s since returned to the Leafs lineup in
three games. He’ll need to see more playing time to draw interest in
the trade market but could be a cost-effective pickup for teams
seeking some muscle and experience.

The top player on our October NHL Trade
Block Big Board, Jakob Chychrun of the Arizona Coyotes garners the
honor again for November. While the 24-year-old defenseman has
requested a trade, his ongoing absence rehabbing from offseason wrist
surgery and the Coyotes’ high asking price have kept him in Arizona
for the time being.

Chychrun has been linked to the Ottawa
Senators in the rumor mill. On Oct. 15, Sportsnet’s Elliotte Friedman
cited multiple sources claiming there isn’t a path for the two clubs
to make a deal. He suggested that might change once Chychrun returns
to action.

On Oct. 26, Friedman reported Chychrun
remained a couple of weeks from rejoining his Coyotes teammates. Two
days earlier, GOPHNX.com’s Craig Morgan suggested that interested
clubs could be waiting to see how well he plays before making trade
offers.

Chychrun continues to draw interest
from several clubs despite the delay in his return to the ice. On
Oct. 19, the Toronto Star‘s Nick Kypreos listed the Maple Leafs,
Senators, Edmonton Oilers, New York Islanders, Columbus Blue Jackets
and Florida Panthers among those believed to have looked into
acquiring him.