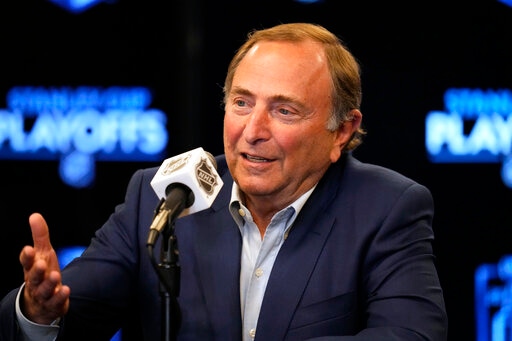 NEW YORK (AP) — The NHL salary cap could get its first big increase since before the pandemic sooner than expected.

Commissioner Gary Bettman said there’s a chance players could be finished paying off what they owe owners from pandemic revenue losses as soon as this season, which would mean the cap going up $4 million or more next summer.

Initial projects were for another modest $1 million bump and a bigger increase in the summer of 2024, but there’s now more optimism about 2023 after Bettman said the league generated $5.4 billion in hockey-related revenue last season.

“Revenue’s pretty vibrant,” Bettman said Tuesday after a meeting of the NHL’s Board of Governors. “The business is good, and so things are looking possible for (players’ debt) being paid off this year. If we miss it, it’ll be close and it’ll be next year.”

The league and union agreed to keep the cap flat coming out of the pandemic and use escrow payments to make up for what players owed owners to split revenue 50/50. That meant the cap staying at $81.5 million for two seasons before going up to $82.5 million this year.

With new U.S. media rights deals and other revenue streams flowing, it could be over $86 million in the not-too-distant future.

Discussions continue between the league, NHL Players’ Association and the International Ice Hockey Federation over hosting a World Cup of Hockey in February 2024. Bettman conceded the parties involved are running out of time to meet that timeline.

“We’re getting close to whatever that deadline is,” Bettman said. “We’ve got to be a position in the foreseeable future to wrap up all the issues, otherwise it would delay the World Cup.”

Among the ongoing issues is what to do with Russia, given the war in Ukraine and how many Russia-born stars currently play in the NHL. One option is to have them play as an entity that is not Russia, but other countries that might be involved have made it known to the league that’s not enough and they don’t want Russian players participating.

“The conflict in the Ukraine makes it difficult to deal with the Russian issue, and we’ve certainly heard from some of the participating countries or countries who would participate would have objections to Russian participation in the World Cup,” Deputy Commissioner Bill Daly said. “Obviously (it is) something that’s relevant and we’d take into consideration in connection with making decisions.”

Bettman emphasized: “We haven’t made any decisions. There’s still a lot of work that has to be done before we even would get to that issue.”

After a league investigation found nothing to substantiate allegations against Tampa Bay Lightning defenseman Ian Cole, Bettman said those conducting it exhausted every possible method to get in contact with the person who posted them anonymously on social media. He called it “pretty comprehensive.”

“Tried everything that you can do off an anonymous tweet of a recently set-up account,” Bettman said. “There was nothing that was found that could substantiate those allegations.”

The Lightning suspended Cole with pay while the investigation was ongoing, something the NHLPA took issue with once he was reinstated. The union said in a statement last weekend: “Players should never be subject to suspension or discipline in response to unsubstantiated and anonymous accusations. Removing a player from his team under these circumstances is inappropriate and grossly unfair.”

Bettman said he understood that point of view and deferred to the Lightning for what was a team decision to suspend Cole. Moving forward, the league will continue to handle similar situations on a case-by-case basis, as they have for several years.

“It depends on the circumstances,” Bettman said. “I don’t think I can give you a blanket rule as to how you deal with it, but we are sensitive to the issue.”

Bettman said the NHL’s investigation into the ongoing scandal involving Hockey Canada is “closer to the end than the beginning.”

The league began the process of holding its own review after news surfaced that Hockey Canada settled a lawsuit with a woman who said she was sexually assaulted by eight members of the country’s world junior team at a gala in 2018. Several players from that gold medal-winning team are currently in the NHL.

Bettman said the timing of the report, which he has vowed the league will release to the public, would depend on the review being done by police in London, Ontario.

“We can focus on what we need to do to feel that we have a comprehensive report, and that work is ongoing,” Bettman said

Copyright 2022 The Associated Press. All rights reserved. This material may not be published, broadcast, rewritten or redistributed without permission.