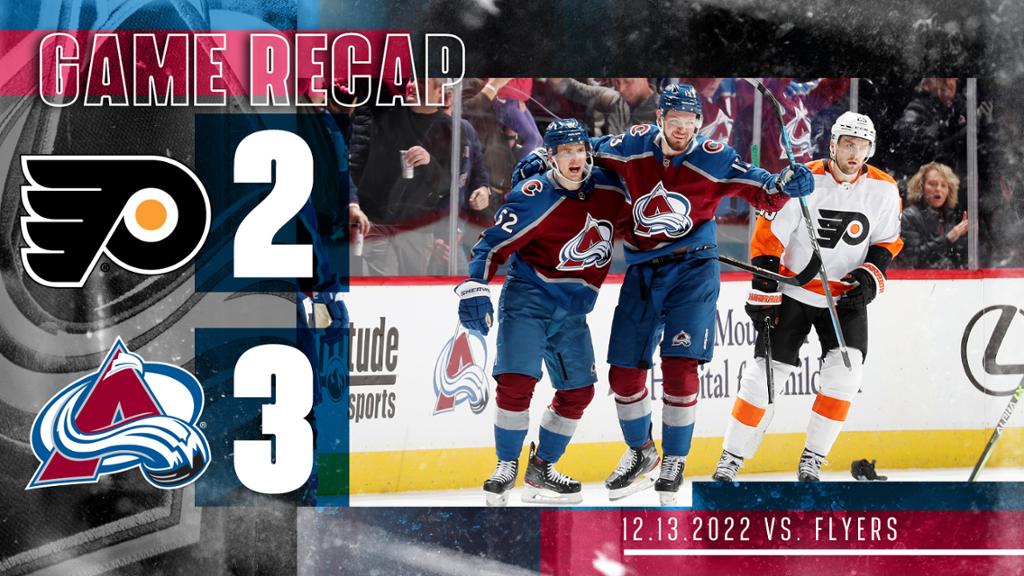 The Colorado Avalanche claimed a 3-2 resilient win over the Philadelphia Flyers on Tuesday night at Ball Arena, as the Avalanche opened up a five-game homestand. Colorado is now 15-10-2 on the season and is riding a three-game point streak (2-0-1).

For the Avalanche, Devon Toews and J.T. Compher scored at even strength, while Artturi Lehkonen (1G, 1A) scored a shorthanded goal. In net, Pavel Francouz made 26 saves on 28 shots.

For the Flyers, Cam York (1G, 1A) and Travis Konecny scored. In between the pipes, Felix Sandstrom made 22 saves on 25 shots.

The Avalanche got off to a dominant start over the Flyers as they dictated the tone of play and maintained possession of the puck, but the Flyers drew the game’s icebreaker a little over midway in the period and took a 1-0 lead heading into the first intermission.

Colorado failed to convert on its first of two unsuccessful power plays in the opening frame. The Flyers then found the back of the net on a fluke net front scrum. York fired a shot on net that was tipped by James van Riemsdyk as he shielded Francouz on the near post. The tip-in attempt deflected off the chest of Francouz and into the blue paint where Devon Toews swatted his stick at the puck. The loose puck was then buried into the net by York, who swooped in at 12:52.

The Avalanche scored two unanswered goals in the second period – including one shorthanded strike – to take a 2-1 lead heading into the final period of play.

Logan O’Connor led a quick rush play up ice and fed the puck up to J.T. Compher. Compher drove into the offensive zone and dished the puck out to the side for Toews, who joined the rush. The defenseman carried the puck, drove to the net and tucked it through Sandstrom’s pads to tie it up 1-1 at 9:25.

The Avalanche had an opportunity to take a 2-1 lead shortly after as they were awarded a power play at 12:04, but they didn’t convert. They then went on their first penalty kill of the game as Mikko Rantanen took a tripping penalty at 13:26. On the Avalanche’s kill, Erik Johnson chipped a puck out of Colorado’s defensive zone. Lehkonen read the play and outskated York for a breakaway. The Finnish winger collected the puck, skated to the net and buried it short side of Sandstrom to give Colorado a 2-1 lead at 15:04.

Philadelphia came out with a determined push in the third period and outshot the Avalanche 9-5 through the midway mark (15-6 in the whole third period), but Francouz was sharp – including denying a Morgan Frost one timer on the backdoor. Colorado was able to capitalize at 11:33 to extend its lead 3-1.

The Flyers didn’t let up and finished the game with a desperate effort as Philadelphia Head Coach John Tortorella pulled Sandstrom with four minutes left. With the extra attacker, the Flyers trimmed their deficit down 3-2 at 16:22 as Travis Konecny fired a long-range shot on net and van Riemsdyk tipped the puck past Francouz.

The Avalanche were able to hold onto the 3-2 score and pick up the two points to extend their point streak to three games (2-0-1).

The Avalanche continue their five-game homestand as they host Buffalo on Thursday night at Ball Arena. The puck drops between the Avs and Sabres at 7 p.m. MT.