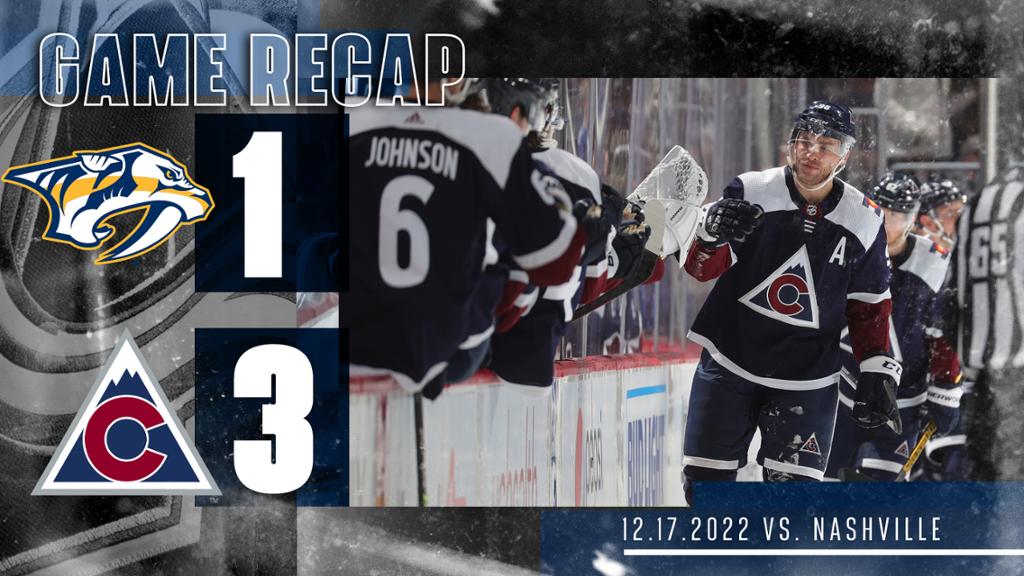 The Colorado Avalanche topped the Nashville Predators 3-1 on Saturday night at Ball Arena, as the Avalanche continued up their five-game homestand. Colorado is now 16-11-2 on the season.

For the Avalanche, Mikko Rantanen scored on the power play, while Alex Newhook also found the back of the net and Cale Makar (1G, 1A) added an empty net goal. In goal, Alexandar Georgiev made 25 saves on 26 shots.

For the Predators, Matt Duchene scored. In between the pipes, Juuse Saros made 27 saves on 29 shots.

19:44 – Avalanche 2, Predators 0 – Valeri Nichushkin intercepted a pass along the boards and Evan Rodrigues grabbed the loose puck and countered. On a two-on-one rush, he faked a shot and sent a feed across the slot to Alex Newhook. The winger wired the puck past Saros to double Colorado’s lead.

Tweet from @Avalanche: The setup and the shot. Glorious. #GoAvsGo pic.twitter.com/PpQmTaG04A

3:25 – Avalanche 2, Predators 1 – Matt Duchene curled around the net and got his shot off, but Georgiev made the initial stop. Duchene picked up his own rebound and ripped his shot past Georgiev to trim Nashville’s deficit down 2-1.

The Avalanche continue their five-game homestand as they host the New York Islanders on Monday night at Ball Arena. The puck drops between the Avs and Isles at 7 p.m. MT.