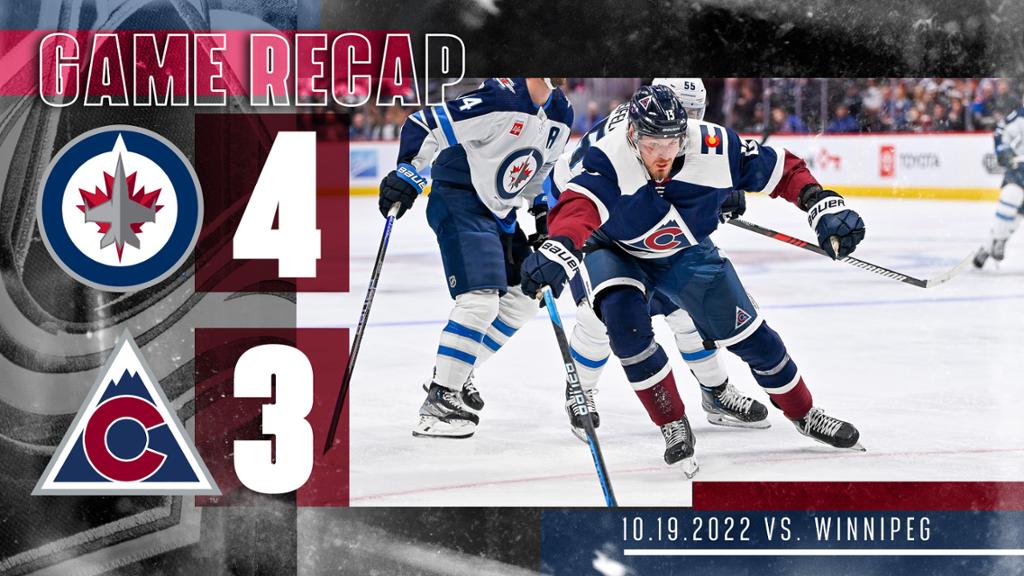 The Colorado Avalanche dropped a 4-3 loss in overtime to the Winnipeg Jets on Wednesday night at Ball Arena. The Avalanche are now 2-1-1 on the season.

Winnipeg claimed the two points in the overtime victory as Neal Pionk scored his second goal of the game 31 seconds into overtime. In regulation, Pionk and Cole Perfetti (1G, 1A) scored at even strength, while Sam Gagner scored on the power play. Connor Hellebuyck made 30 saves on 33 shots.

Mikko Rantanen (2G, 1A) scored twice at even strength, while Valeri Nichuhskin (1G, 1A) added a power play strike for Colorado. Alexandar Georgiev made 24 saves on 28 shots in his second-straight start.

The Jets secured the two points 31 seconds into overtime, as Pionk skated up ice and wired a slap shot past Georgiev.

Colorado trailed Winnipeg 2-0 heading into the first intermission after the Jets found the back of the net on a power-play strike from Gagner and a goal from Pionk on a sequence of 4v4 hockey.

The Jets drew the game’s icebreaker at 6:52 after they received their first power play of the game at 5:23 as Samuel Girard was called for tripping. Georgiev had come up with a timely stop at the netfront on Kyle Connor to hold Winnipeg off the board, but the Jets maintained possession and cycled the puck out. Cole Perfetti snapped a cross-ice pass to Gagner, whose initial look was stoned by Georgiev as was the rebound that Adam Lowry attempted to jam in. The loose puck skipped back out and Gagner roofed his shot past Georgiev’s glove.

The Avalanche had a chance to equalize the score just under midway through the period as Anton Blidh, who made his debut for Colorado, was sprung on a rush by Logan O’Connor, but Hellebuyck poked the puck away.

Winnipeg sealed its second goal of the frame on a 4v4 on sequence as Martin Kaut and Cole Perfetti each received matching roughing penalties at 12:57. Shortly after play resumed, Jets winger Mason Appleton skated into the offensive zone and dropped a pass back to Pionk, who wired his shot over Georgiev’s glove at 13:21 to double the Jets’ lead 2-0.

Down 2-0, Colorado amped up the intensity with a three-goal effort in the second frame to make it an even 3-3 game heading into the final 20 minutes of play.

Tweet from @Avalanche: SO loose. Mikko gets our first!#GoAvsGo pic.twitter.com/ThsSKUzSht

The Avalanche stormed out to the second period and dominated early on. They successfully hemmed the Jets into their own zone and took advantage on an extended offensive zone shift as they cycled the puck around. After sending the puck from d-to-d across the blueline, Devon Toews threaded his pass down to the right faceoff circle to Nathan MacKinnon. The centerman redirected the pass to the doorstep where Rantanen buried his team’s first goal of the game at 2:14.

The Jets restored their two-goal lead at 9:44 on a quick passing sequence around the net. Pierre-Luc Dubois forechecked the puck free from below the hash marks and played Black Wheeler at the crease. Wheeler slid the puck to the backdoor where Perfetti banked the puck into the open net before Georgiev could slide across.

The Avalanche began to push despite the two-goal deficit and began chipping away with another extended zone shift conversion at 16:26. This time, Nichushkin sent a cross-slot pass to Bowen Byram, who fed the puck back to the net front for Rantanen to bury on the fly past Hellebuyck.

Colorado was then awarded a power play at 17:50 as Appleton slashed J.T. Compher. The Avs power play went to work and converted on a nifty passing sequence as Nichushkin exchanged a give-and-go with Rantanen concluding in Nichushkin putting away his team-leading fifth goal of the season – and fourth on the power play – to extend his goal streak to four games.

The Avalanche remain at Ball Arena for a matchup against the Seattle Kraken on Friday night. Puck drop between Colorado and the Kraken is 7 p.m. MT.