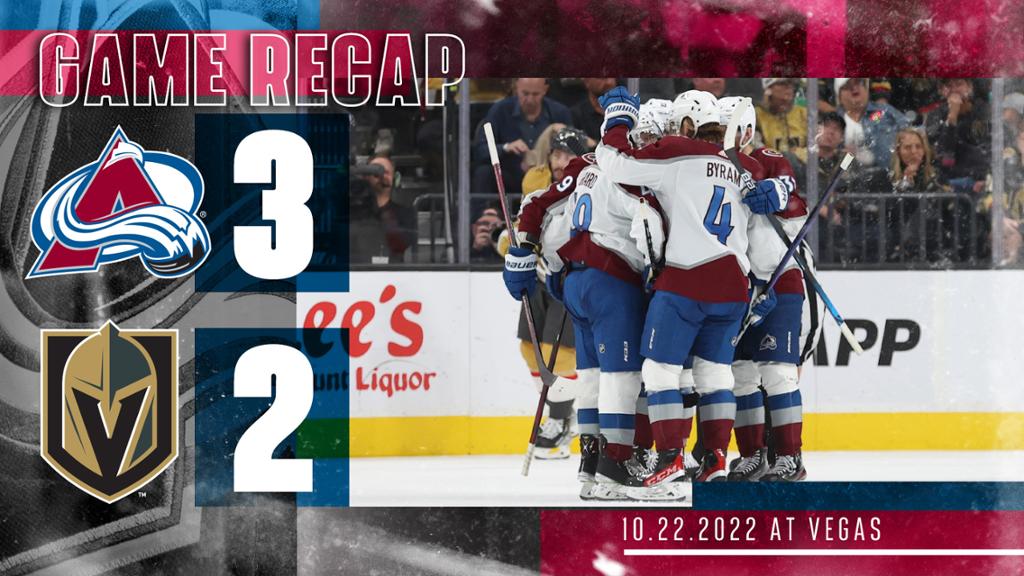 The Colorado Avalanche the Vegas Golden Knights on Saturday night at T-Mobile Arena. The Avalanche are now 3-2-1 on the season.

For the Avalanche, they received two power-play goals from Nathan MacKinnon and Evan Rodrigues. Valeri Nichushkin scored at even strength. Alexandar Georgiev made 33 saves on 35 shots.

The Avalanche and Golden Knights skated out to a locked 1-1 score following the first period as both sides exchanged power-play goals.

Colorado scored the game’s icebreaker early on at 5:39 after Vegas defenseman Shea Theodore took a tripping penalty on Alex Newhook at 4:59. Artturi Lehkonen fed the puck out to the blueline to Cale Makar, where the defenseman snapped the puck over to the right faceoff circle to set up MacKinnon. The Avalanche centerman squared up and unleashed a blistering one timer to the far side of Thompson to give the Avalanche a 1-1 lead.

Towards the end of the period, the Golden Knights picked up some steam and drew a slashing penalty on Mikko Rantanen at 18:52 as they rushed towards the Avalanche net. On Vegas’ first power play of the game, they broke down Colorado’s penalty kill with a quick passing sequence. Jack Eichel sent a feed to Mark Stone, who threaded his pass through the seam to the backdoor for Marchessault to bury it on before Georgiev could slide across at 19:17 for the 1-1 equalizer heading into the first intermission.

The Avalanche came out with a dominant effort to start the second period and were shortly awarded thereafter with their second power-play goal of the game at 6:20. Vegas forward Brett Howden went to the box at 4:51 for slashing.

Colorado’s power play was nearing expiration, they cycled the puck d-to-d from Bowen Byram to Samuel Girard, who found Rodrigues in the right faceoff circle. Rodrigues blasted a one timer past Thompson’s glove to double Colorado’s lead 2-1 and marked his second-straight game with a goal.

The Avalanche weathered a push by Vegas – who held a 16-11 shot advantage in the middle frame – and came up with a clutch penalty kill at 13:30 as Josh Manson was called for holding. On the Vegas power play, a netfront scrum knocked Georgiev out of position and Byram laid out in the crease to block a Golden Knights shot.

At 8:10, Nichuhskin extended Colorado’s lead 3-1 on a tremendous individual effort. The winger jetted up the ice carrying the puck, cut through the center of the neutral zone, entered the offensive zone, stick handled his way through Vegas’ defense and slipped his shot past Thompson.

The Golden Knights trimmed their deficit down 3-2 at 10:32 on a quick passing sequence. Eichel fed Stone below the hash marks who sent a feed into the slot. Stephenson buried his shot past Georgiev.

Georgiev made his fourth start of the season and improved his record to 3-0-1.

Tweet from @Avalanche: THAT���S A WRAP IN VEGAS. #GoAvsGo pic.twitter.com/LHYzuPiavV

Georgiev didn’t receive a hefty workload in the first period, with just five shots faced, but the Avalanche netminder came up with clutch stops on the few that he did see. Georgiev denied a Stone backhanded chance in tight during the opening minutes of play.

Georgiev’s workload tripled in the second period as he saw 16 shots and denied all of them. Just under midway in the frame – and when the Avalanche held a 2-1 lead – Georgiev gloved a chance in the slot from Marchessault.

Georgiev concluded his “incredible” performance – as Rodrigues called it postgame – with 13 saves in the final period including a last minute stop to secure his third win of the season.

The Avalanche travel to New York on Monday morning to kick off a long road trip with the first stop on Tuesday against the New York Rangers at Madison Square Garden. Puck drop on Oct. 25 begins at 6 p.m. MT.