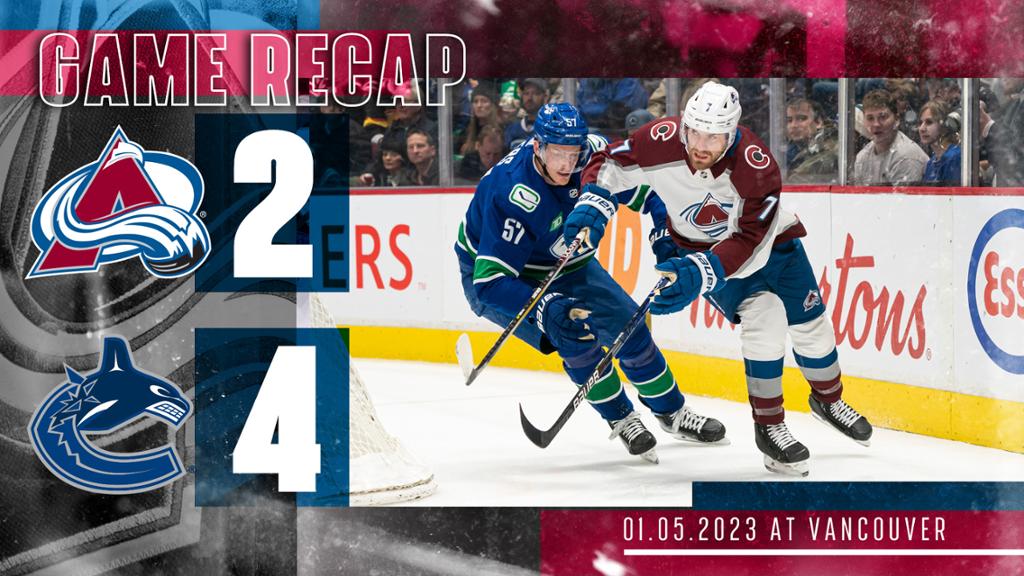 The Colorado Avalanche dropped a 4-2 loss to the Vancouver Canucks on Thursday night at Rogers Arena. Colorado is now 19-15-3 on the season, while their winless skid reached five games (0-4-1).

For the Avalanche, Mikko Rantanen scored on the power play, while Samuel Girard also found the back of the net. In net, Alexandar Georgiev made 39 saves on 42 shots in the loss.

For Vancouver, Andrei Kuzmenko scored twice, while Brock Boeser netted an even-strength goal and J.T. Miller added an empty-net strike. Elias Pettersson and Oliver Ekman-Larsson each handed out two assists. Between the pipes, Colin Deila made 30 saves on 32 shots.

Despite entering Thursday’s contest with a strong start and effort, a lapse in the second period and too many penalties (seven taken) throughout the course of the game proved costly to the Avalanche as they extended their winless skid to five games (0-4-1).

Colorado took a 1-0 lead heading into the first intermission as they capitalized on their second power-play chance of the game – and after killing off two penalties of their own – late in the frame.

Tweet from @Avalanche: What a beauty from the Moose! Timely too 😁#GoAvsGo pic.twitter.com/kpCH5dazzx

Artturi Lehkonen drew a hooking penalty on Tyler Myers at 17:56. On Colorado’s power play, Lehkonen threaded a pass out to Cale Makar at the blueline. The defenseman – who was named to the 2023 All Star Weekend ahead of the game – sent a pass out to Rantanen atop the right faceoff circle. The Finnish winger took his space before snipping a sizzling wrist shot to the far side of Delia and off the post to give the Avalanche a 1-0 lead with one-minute left in the first period.

Despite a strong start to the second period – as Colorado lit the lamp just 1:49 into play to take a 2-0 lead – the Canucks seized the momentum and cashed in on their chances as they scored three-straight goals and out shot the Avalanche 18-7 to take a 3-2 lead heading into the final 20 minutes of play.

The Avalanche had extended their lead 2-0 at 1:49 as Andreas Englund sent a pass across the blueline to Girard. From distance, the blueliner zipped a high shot over Delia’s glove for his third goal of the season.

The Avalanche had killed off two-straight penalties and subsequently failed to convert on a power play of their own and then, suffered their first goal against of the contest as Devon Toews took a booking penalty at 11:52 and Vancouver drew its first strike.

On the Canucks’ power play – just as it was near expiration – Kuzmenko skated into the slot, deked and sent a backhander to the far side of Georgiev at 13:50. The goal was the first of a discombobulated couple of minutes for the Avalanche as their composure spiraled and the Canucks capitalized.

At 15:14, Kuzmenko tallied his second goal of the game to tie the score 2-2. Pettersson curled around the net as he attempted a wraparound. Georgiev made the stop, but Kuzmenko jammed the puck in on the backdoor.

Just 34 seconds after the Canucks’ equalizer, they overtook the lead to 3-2 at 15:48. Bo Horvat picked up an attempted clear near the left faceoff circle and put a shot on net. Georgiev made the stop, but Boeser buried the rebound in the low slot.

The Avalanche played a solid effort in the third period – and generated a breakaway chance late in the frame for Darren Helm that was denied by Delia – but the Canucks held on to their lead and sealed the game with an empty-net strike by Miller at 18:24.

The Avalanche continue their two-game road trip across the border as they travel to Edmonton for the first meeting of Saturday. The puck drops between the Avs and Canucks at 8 p.m. MT.