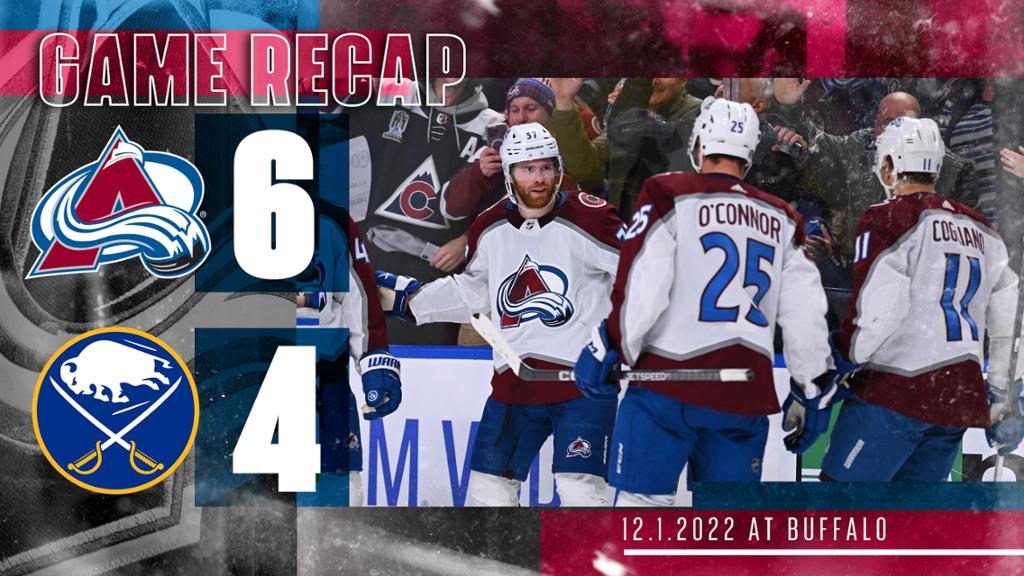 Back in the win column.

The Colorado Avalanche defeated the Buffalo Sabres 6-4 on Thursday night at KeyBank Center as the Avalanche continued their four-game road trip. The Avalanche are now 13-7-1 on the season.

Nathan MacKinnon paced the Avalanche with a five-point night (2G, 3A) as J.T. Compher recorded a four-point (2G, 2A) outing and Artturi Lehkonen also scored at even strength and Mikko Rantanen (1G, 1A) netted an empty-net goal. Cale Makar and Devon Toewseach handed out two assists. In net, Alexandar Georgiev made 24 saves on 28 shots.

For the Sabres, JJ Peterka and Alex Tuch scored at even strength while Tage Thompson (1G, 2A) and Dylan Cozens (1G, 2A) added a power-play strike. Jeff Skinner handed out two assists. In between the pipes, Ukko Pekka Luukkonen made 28 saves on 33 shots.

It wasn’t easy, nor was it pretty, but the Avalanche stayed the course, stayed committed and powered through to get back in the win column over the Sabres.

Colorado trailed the Sabres 2-1 heading into the first intermission and having held a 9-8 shot advantage. The Avalanche scored the game’s icebreaker at 8:48 on their first power play of the game after Devon Toews drew a hooking penalty at 7:27.

As Colorado’s lethal power play went to work, Makar struck the crossbar with a blistering shot. After regaining control of the loose puck, the unit cycled the puck around and Toews found Nathan MacKinnon atop the left faceoff circle where he sent a pass down to the goal line for Compher. The winger turned and roofed a shot over Luukkonen to give the Avs a 1-0 lead at 8:48.

Tweet from @Avalanche: It was a lead. It was short lived. Let���s get more. #GoAvsGo pic.twitter.com/CfcxTv5MFX

The lead was short-lived as Buffalo responded just 1:31 later. The Sabres forced a turnover along the boards which led to a vulnerable two-on-one. Jack Quinn threaded a pass across the slot to Peterka who fired the puck from the inner right faceoff circle into a wide-open-net at 10:19.

As the clock wound down for the first period, Logan O’Connor put the Sabres on their third power play of the night.

As the Avalanche’s penalty kill scrambled to get a loose puck and Erik Johnson sprawled out, and a loose puck popped out into the slot to the stick of Thompson. The Sabres’ leading scorer skated down to the doorstep and tucked the puck past Georgiev – who came out of his crease – to double Buffalo’s lead 2-1 with 11 seconds left in the first period.

After allowing a goal in the last minute of the period, the Avalanche stormed out with a solid effort to start the second frame and capitalized with a four-goal effort – including two power play strikes – to take a 5-2 lead. The Sabres trimmed their deficit down 5-3 heading into the final period as they converted on a 5-on-3 power play late in the frame.

Tweet from @Avalanche: A look at none other than top shelf magic from Nathan MacKinnon 🪄#GoAvsGo pic.twitter.com/KNzAGh82jk

Colorado received a 5-on-3 as Henri Jokiharju was called for holding at 7:45 and Owen Power was whistles off for high sticking at 7:50. On the Avalanche power play, MacKinnon grabbed a pass from Makar in between the circles, sidestepped a Buffalo forward and sniped his shot past Luukkonen’s glove for the 2-2 equalizer at 9:00.

The Avalanche then regained the lead as their power play continued as they hemmed Buffalo in their own zone. MacKinnon fired a shot on net, Luukkonen made the stop, but the puck bounced out to Lehkonen at the doorstep, who put the loose puck into the net to give Colorado a 3-2 lead at 9:49.

With momentum from back-to-back power-play goals, Colorado didn’t let up and extended its lead 4-2 at 11:53 with a strike in transition by MacKinnon. As the Avalanche jetted up ice, Makar snapped a pass across the slot to MacKinnon, where the centerman buried his second goal of the night by zipping his shot over Luukkonen’s glove.

Tweet from @Avalanche: How much do we love MacKinnon?Words don���t begin to describe. #GoAvsGo pic.twitter.com/AqA0aGXT07

The Sabres trimmed their deficit down to 4-3 at 14:05 after receiving a 5-on-3 power play as Rantanen was sent to the box for hooking and Toews was called for cross-checking at 12:20. Colorado’s penalty kill unit of Erik Johnson, Josh Manson and Andrew Cogliano came out with huge efforts and laid out for big blocks on the PK, but Buffalo eventually capitalized as Thompson sent a pass to the right faceoff circle Cozens unleashed a one timer past Georgiev.

The Avalanche stifled some of Buffalo’s momentum heading into the final period of play as they scored late in the middle frame to further their lead 5-3 at 17:16. On a quick transition play up ice, Andrew Cogliano charged into the Sabres’ zone and dropped a pass out to his linemate in Logan O’Connor. O’Connor sent a shot on net that Luukkonen stopped, but the rebound kicked out into the slot and Compher crashed the net to bury his second goal of the night.

Tweet from @Avalanche: J.T. Compher scoring is something we all love to see. #GoAvsGo pic.twitter.com/hcEHfFfUyF

Just seven seconds into the third period, the Sabres trimmed their deficit down to one goal. Off the opening faceoff for the period, Rasmus Dahlin fired a shot off the end boards and Tuch chased it down, dragged it across the crease and past Georgiev.

The Avalanche iced the game as Rantanen added an empty netter at 19:25.

The Avalanche continue their road trip as they travel to Boston for a matchup on Saturday night. The puck drops between the Avs and Bruins at 5 p.m. MT.