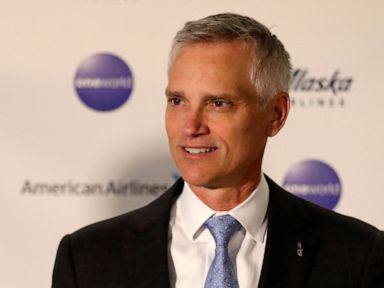 The CEO of American Airlines said Monday that his airline needed a partnership with JetBlue because Delta Air Lines had bulked up through a merger sooner than American, had more takeoff and landing rights at New York airports, and fewer unionized workers.

Robert Isom also conceded that Delta has “run a nice, reliable airline” and enjoys some cost advantages over American.

The Justice Department and six states are suing American and JetBlue in federal court over their regional partnership in the Northeast, which government lawyers call a de facto merger. Isom defended the arrangement, which has been in effect for well over a year, as JetBlue CEO Robin Hayes did last week during a trial in federal court in Boston.

Hayes, however, once had misgivings about the deal — called the Northeast alliance, or NEA — because of American’s size advantage over JetBlue.

Laurence — who later jumped to American after a one-month gig at Delta — testified that Hayes worried American “had nearly unlimited resources” to tilt the alliance to its favor. Despite Hayes’ concerns, American and JetBlue announced their deal six months after Laurence’s text message.

The Justice Department is trying to convince U.S. District Judge Leo Sorokin to kill the partnership, under which American and JetBlue work together to set schedules and share revenue, although they are not allowed to collaborate on prices. Government lawyers argue that the deal limits competition and will push fares higher.

American and JetBlue say the government has no evidence that the deal is hurting consumers. To the contrary, they say it will help travelers by creating a stronger competitor to Delta and United in New York and Boston.

American and JetBlue say they were unable to grow in New York on their own because they couldn’t get enough new takeoff and landing times — called slots — at congested airports. JetBlue resorted to unusual tactics including red-eye flights, and it tried to get slots from other airlines.

“How did that go?” JetBlue lawyer Richard Schwed asked Laurence.

“It went poorly,” the executive replied. “I don’t think our competitors were interested in seeing us gain more access.”

The trial is expected to last about another week, but it could be weeks or months later until Sorokin issues his ruling — there is no jury.