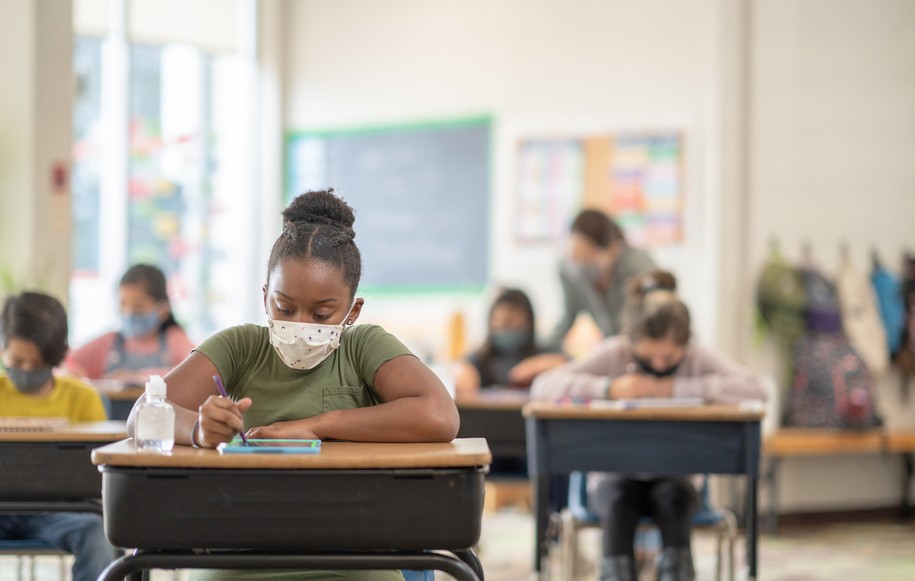 As discussions took shape about a potential state government takeover of Providence schools, Rivera also heard from parents, students, and teachers who questioned whether giving government officials sole decision-making power over the schools was the best option for everyone. With the help of local advocacy groups, students prepared a proposal and presented it to the education commissioner and governor, asking for youth and parent involvement in any school decision-making. But the proposal was swiftly rejected, and officials moved forward with their plan.

In November 2019, Rhode Island officially took over Providence’s public school system and handed over control to the education commissioner. A state takeover of a school district involves state officials removing decision-making power from the locally elected school board. Once the district is under state control, officials have the authority to directly control the district, fire the locally elected school board and appoint a new one, transfer district control to the local mayor, or appoint a receiver to manage the district. Researchers have found that government takeovers usually target communities of color with high numbers of low-income and low-performing students.

Historically, school districts, under the prospect of a government takeover, are districts that state government officials considered so inefficient and chronically underperforming as measured by standardized testing that immediate intervention is necessary. But research shows that those that are ultimately taken over, especially in urban communities of mostly non-white students, do not show significant improvement even decades after local control of schools has been lost. And in the meantime, communities of color suffer a loss of political power that has far-reaching implications. Given the drawbacks, local communities and students are becoming more vocal in the fight against takeovers.

‘The puzzle doesn’t look any better’

Since the takeover of Providence schools, Rivera said he cannot honestly pinpoint an area that has significantly improved for public school students. Efforts to incorporate student involvement into government decision-making have fallen apart in recent years, Rivera said, because of bureaucracy and disorganization at the Department of Education.

“We haven’t seen any change,” Rivera said, “If anything, it feels like they blew up the puzzle, and there are people trying to put the pieces together, but the puzzle still doesn’t look any better.”

In May 2022, Boston Public Schools were facing a state takeover. The plan arose in the wake of a 2020 audit by the city’s superintendent, who found that the region’s largest school district had “failed to effectively serve its most vulnerable students, carry out basic operational functions, and address systemic barriers to providing an equitable, quality education.”

Once hailed as the gold standard of public education, Boston schools are now plagued by years of transportation issues, rising teacher turnover, declining student enrollment, and reports of misconduct by school officials. Experts argued that handing over control of the school district to the state would put schools and students back on the right path.

Since the 2020 report, Boston has appointed a new school superintendent, the seventh since 2012, and elected a new mayor who joined parents, school staff, and students in swiftly opposing state interference in the city’s public schools. By the end of June 2022, the district successfully fought off a state takeover as long as schools reached achievement benchmarks by 2025.

Dan French, a longtime educator and the president of the advocacy organization Citizens for Public Schools, said the problems Boston Public Schools face are due to the district’s slow-moving approach to addressing issues of inequity that have widened the learning gap for many Boston students. A state takeover, French added, would not quickly close that gap. According to French, none of the Massachusetts school districts that have come under state oversight, including Lawrence, the first in the state, have shown significant and lasting progress.

The 2011 takeover of Lawrence Public Schools in Massachusetts is often cited as a successful intervention in a chronically low-performing school system, said French, since early in its takeover, Lawrence Public Schools saw slight incremental improvement in English language and math proficiency. Still, parents and community leaders have recently scrutinized the receivership, blamed a spate of violence among high school students on the district’s provider mismanagement, and called for an end to the takeover.

“None of those [Lawrence, Holyoke, Southbridge, Springfield] have seen much of any progress in the years that they’ve been under receivership or oversight. This whole concept of state receivership is built on, I would argue, faulty premises with standardized tests being the main determinant of whether a district or school is considered for state receivership when standardized tests in no way reflect what kids know, and can do in more real-world situations,” French said.

The political power of public schools

Domingo Morel, an associate professor of political science at Rutgers University and author of Takeover: Race, Education, and American Democracy, argues that a school takeover is about much more than simply reforming schools. According to Domingo, they are a direct reaction from state governments to stall communities of color that successfully organize and begin to gain political power.

Morel said he first became interested in government interventions in public schools in 2010 after the superintendent fired every teacher at Central Falls High School in Rhode Island. The move was part of a school reform program enabled by the Obama Administration that allowed the dismissal of teachers at underperforming schools. Central Falls was considered one of the state’s worst at the time, and the drastic move was celebrated in a speech by the former president.

According to Morel, who is Puerto Rican and a native of Rhode Island, the idea that the highest levels of government focused on the smallest city in the smallest state in the country left him unsettled.

“President Barack Obama gave a speech saluting, congratulating, applauding the efforts of these school administrators in Central Falls for doing what they did. So I said, ‘You know what? While everyone is focusing on the education part of this story, I’m going to look at this through a political perspective.’”

By 2011, the city of Central Falls was under receivership and on the brink of declaring bankruptcy after accumulating heavy debts and with no way to pay pensions, fund the public library, or keep the community center open.

Yet, even through the financial struggles, Morel said he noticed a demographic shift in political power in Central Falls. According to Morel, the city council was on the verge of becoming a Latino majority, and the town was about to elect its first Latino mayor who won in 2012. The trend was significant considering that 20 years before that, in 1991, when Rhode Island first took over the Central Falls School District, the local school board was entirely white, while the schools were 40% Latino. The all-white school board was fired after the state takeover, and a newly appointed board included three Latino members.

The idea that the state takeover of Central Falls schools more than three decades ago enabled Latino political representation in Central Falls is a rare exception, Morel argues, adding that the vast majority of school takeovers in the last 40 years have politically impaired communities of color.

The state takeover of Newark’s school district in 1995 is possibly one of the most well-known and longest-running examples of what happens to a predominantly Black community when a state takes over its schools.

On April 14, 1995, a New Jersey state judge ordered the state to take over the Newark school district. In a blistering 56-page ruling, Judge Stephen G. Weiss condemned the district’s lack of improvement over 10 years. A New York Times article on the decision quoted a Newark parent who was hesitant to accept that a takeover was the best option for improving schools, saying, “I don’t think the state has demonstrated in any way a real commitment to meet the needs of the kids.”

While some community members are willing to give the state the benefit of the doubt, takeovers can disrupt community involvement. It’s common, said Morel, for state officials to disband an elected local school board during a takeover, making it harder for community members to hold officials accountable for decision-making.

He added that a takeover is essentially an outside force that comes and makes decisions that communities are unwilling to make, often because they remove resources and programs. For the most part, Morel said, communities are more willing to advocate for more resources than they are to cut costs by firing teachers or social workers or cutting music and arts programs.

“It becomes quite clear what takeovers are about. So, what does it mean for our democracy when a community doesn’t have the ability to say, ‘No, stop, we don’t want this’ because the people imposing these policies don’t have to pay a political price for these policies?”

In-depth research on whether school takeovers improve schools and learning is still underway, but early analysis shows no significant change in educational proficiency. The impacts on the broader communities, however, will be harder to quantify.

In 2021, the New Jersey Board of Education expressed regret over a failed 30-year takeover of Paterson Public Schools before handing control back to the district. After the takeover, only 29% of Paterson students were proficient in language arts and just 17% in math. “I hope … we never see a takeover of a school district again in the history of our state,” a state board member told a local newspaper.

Even as researchers argue the merits of school takeovers, states continue to implement them as a reforming tool. In 2019, after a month-long set of hearings where community members rejected the plan, Rhode Island’s education commissioner moved forward with announcing a five-year takeover of Providence’s embattled public schools.

Rivera said young people have been galvanized to continue organizing for educational equity, adding that teachers have recently joined the efforts.

“Now we have high school alumni who are still energized, who are now supporting the younger students. So there’s an intergenerational pipeline of public school students who are going to continue this fight. So it’s not going to stop,” he said.

French said time will tell if Boston’s three-year plan to transform the district is enough time to create lasting change.

“People do their best work when they feel as though they have a say,” French said. “So state receivership would have removed that ability to have a say. It keeps educators, community leaders, and parents from working together and improving the district.”

Kio Herrera is a reporter based in New York City. She is a graduate of Columbia University’s Graduate School of Journalism, where she was a Toni Stabile Investigative Journalism Fellow. Her previous work focuses on education, criminal justice, and healthcare. Her reporting and research have appeared in the Center for Public Integrity, Centro de Periodismo Investigativo de Puerto Rico, The New Republic, and the Marshall Project.

Prism is an independent and nonprofit newsroom led by journalists of color. Our in-depth and thought-provoking journalism reflects the lived experiences of people most impacted by injustice. We tell stories from the ground up to disrupt harmful narratives, and to inform movements for justice. Sign up for our newsletter to get our stories in your inbox, and follow us on Twitter, Facebook, and Instagram.