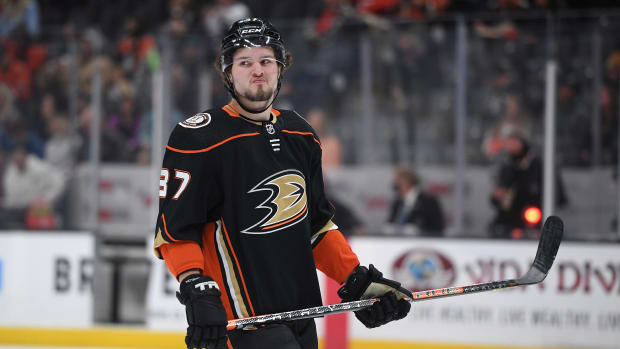 Losing by a touchdown in football is commonplace; losing by seven in hockey is rough. For an Anaheim Ducks squad still trying to find its way this season, a 7-0 loss to the Toronto Maple Leafs was tough to swallow, especially since they had also been blanked 3-0 by the Ottawa Senators the night before.

The promise in this Ducks team relies on its future: Trevor Zegras, Mason McTavish and the injured Jamie Drysdale are among the most important players on the squad, whether it be in the present or the near-future. Goaltender Lukas Dostal, who took over for an injured John Gibson during the loss to the Leafs, is another youngster with potential, but he and the other kids need help along the way. At the same time, the Ducks are now dead-last in the NHL with just one regulation win and seven victories overall through 30 games. This is the crux of the challenge facing Anaheim’s veterans right now: trying to guide the next generation while also figuring out how to turn the ship around.

“That’s what I’m trying to figure out along the way,” said longtime Ducks defenseman Cam Fowler. “We obviously understand the situation we’re in – a team that is building for the future – but we have to figure out a way to do that in a much better way than what we’re doing right now in terms of performance. A lot of that falls on us, the guys that have been around a long time and it’s been a challenge, for sure. But that’s what is expected of us as the leadership group and it’s something we’ll continue to work on.”

The frustrations were palpable around the dressing room after the game, with both Fowler and coach Dallas Eakins lamenting how Dostal (who was strafed for five goals on 15 shots in a period-and-a-half of action) was often left out to dry by the skaters in front of him. Eakins was also upset with how some of his players seemed to be playing individual games instead of abiding by their usual team structure.

Having said that, the coach sees lessons for his team’s youngsters in these rough stretches.

“Well, No. 1 – and we talk about this a lot – they won’t understand this until we get through it: Adversity sucks,” he said. “It’s hard when you’re in it, but when you come out on the other side, you’re often quite grateful for that adversity. It teaches you great lessons, it callouses your brain; I think it’s necessary for a lot of parts of life and certainly necessary to build hockey teams.”

And if the Ducks need a perfect example, their coach points to the reigning Stanley Cup champions.

“Six years ago, the Colorado Avalanche were (34) games under .500,” Eakins said. “They had MacKinnon, they had Rantanen, they had Landeskog, they had the same coach. And through that adversity, they built a very elite team.”

It can’t be easy for the Ducks’ newest members to go through this, especially when they’ve been used to winning: McTavish for example, is coming off a world junior gold with Canada in the summer after winning the OHL championship with Hamilton last season. Zegras himself won world juniors gold with Team USA in 2021.

Based on the standings right now, Anaheim has a great shot at picking first overall in the 2023 draft, which would give them first dibs on Regina Pats phenom Connor Bedard. It’s not a goal for the players and coaches, but it would certainly add another explosive weapon to the lineup next year. In the meantime, those already in the organization continue to search for answers.

“We’re not going to hang our heads or whine,” Eakins said after the Toronto blowout. “We’re going to own it and move on.”