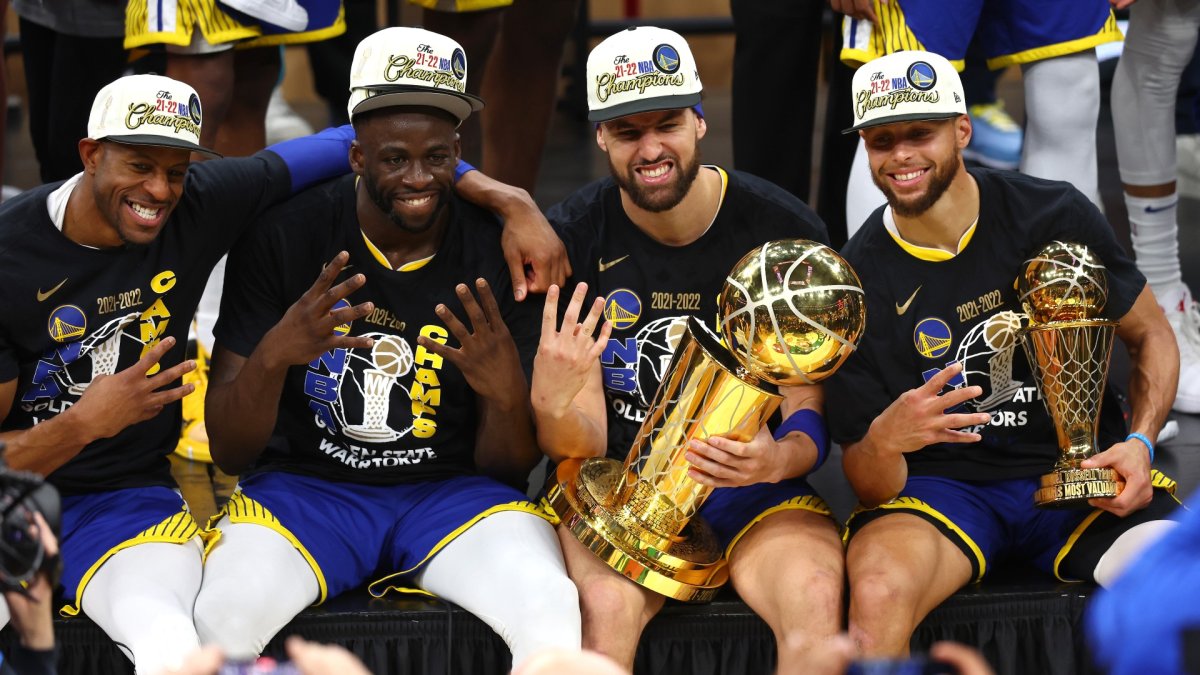 Astros, Warriors among the most dominant champions in 2022 originally appeared on NBC Sports Chicago

On top of the world.

Between the NFL, NBA, NHL, MLB, MLS and NCAA college football, no league had a repeat team emerging as victors in consecutive campaigns.

To recap the champions 2022 delivered from January all the way to November, let’s look back at what franchises got to unveil and flaunt new banners:

The Bulldogs stepped all over the Alabama Crimson Tide in the 2022 College Football Playoff on Jan. 10. Georgia entered the game as the No. 3 seed in the bracket and Alabama as the No. 1. Field goals were the name of the game early on as neither offense mustered enough to get into the endzone, until Georgia broke the drought in the third quarter.

Alabama responded with nine unanswered points to start the fourth quarter, but it wouldn’t score for the rest of the game. Georgia rattled off three straight touchdowns – two coming via Stetson Bennett passes and the third being a 79-yard pick-six – to take home the 33-18 victory. It was the Bulldogs’ third national championship in school history and their first since 1980.

The home-field advantage curse was broken in consecutive seasons. First, it was Tom Brady and the Tampa Bay Buccaneers in Super Bowl LV in Raymond James Stadium. Then, Matthew Stafford and the Los Angeles Rams did it again in Super Bowl LVI in SoFi Stadium.

Los Angeles battled Joe Burrow and the Cincinnati Bengals on Feb. 13, and both teams exchanged scores throughout. Despite the Bengals taking a 20-16 lead going into the fourth quarter, the offense stalled and couldn’t extend the advantage. Stafford then anchored the eventual game-sealing touchdown drive that ended in a one-yard catch for Cooper Kupp to win 23-20.

It marked the franchise’s second Super Bowl win post-AFL-NFL merger, with the other one coming in Super Bowl XXXIV in 1999.

Would the Golden State Warriors continue to add to their trophy cabinet in recent years or would the Boston Celtics finally grab Banner No. 18? Those were the questions entering a riveting showdown in the 2022 NBA Finals, headlined by Stephen Curry and Jayson Tatum.

Despite having home-court advantage, the Warriors lost Game 1, but responded in the follow-up match to head to Boston knotted up at 1-1. The Celtics then cruised to a 116-100 win in TD Garden, but never achieved victory again in the series.

Golden State pulled off three straight wins to win the series in six games, making it seven titles in franchise history and four since 2015. The Warriors won Game 6 103-90 behind Curry’s 34 points, and he was deservedly named Finals MVP for multiple heroic performances.

The Tampa Bay Lightning were looking to make it three straight Stanley Cup wins after coming out on top in 2020 and 2021, but the Colorado Avalanche had other ideas in a thrilling six-game series.

Colorado used home-ice advantage accordingly, getting off to a promising start after winning the first game 4-3 in overtime before dominating 7-0 in Game 2. Tampa Bay would not be shocked without a fight, however, and claimed Game 3 at home with a 6-2 win. But the Lightning couldn’t capitalize on the momentum and lost Game 4 3-2 in overtime.

The Avalanche eventually won the series thanks to a narrow 2-1 win in Game 6 with two second-period goals from Nathan MacKinnon and Artturi Lehkonen. It marked the team’s third Stanley Cup after winning it in 1995-96 and 2000-01.

It didn’t always look like it, but the Houston Astros emerged victorious in an enthralling six-game series against the Philadelphia Phillies.

Houston had problems trying to get control of the series, as the Phillies took 1-0 and 2-1 leads that forced the Astros to come back twice to prevent a multiple-game deficit. After going down 2-1 through three games, the ‘Stros blasted past Philly with three straight wins to claim the series 4-2.

LAFC finished 2022 with its best ever season after being founded in 2014. The Black and Gold had won the MLS’ Supporters Shield after finishing the regular season with the best overall record in the league from both conferences, and they continued their dominance in the postseason.

The Black and Gold had a first-round bye, but topped rivals Los Angeles Galaxy 3-2 in the Western Conference Semifinal before routing Austin FC 3-0 in the conference final.

It came down to a thrilling showdown against the Philadelphia Union in the MLS Cup, with LAFC having home-field advantage. After an absurd ending that saw Gareth Bale score the equalizer in the eighth minute of stoppage time in the second period of extra time to make it 3-3, the Black and Gold won the penalty shootout 3-0 with their backup goalkeeper.