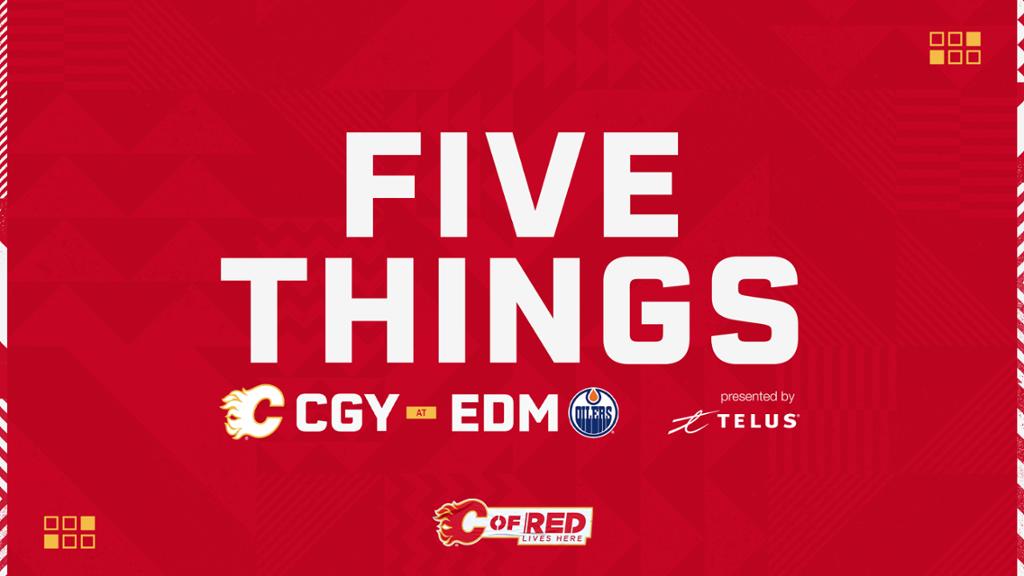 Jacob Markstrom has little interest in re-visiting the spring.

The Flames’ No.-1 puck-stopper knows that while tonight’s Battle of Alberta won’t have the same cachet as that first-in-31-year spectacle, getting there – again – means parking the past and focusing solely on what matters now:

“It’s Game 2 of a new season,” Markstrom deadpanned when asked whether or not this game has any added significance.

“We have a new team and we have new goals set for this season, and that’s what we’re sticking with,” he continued. “It doesn’t matter what the other team is doing or who we’re playing. We know what we have to do. Everyone in this room is looking forward and not backwards.”

At the same time, both dressing rooms are keenly aware of the bragging rights at stake, the ‘statements,’ or warning shots that could be delivered with a stiff blow to the other this early in the campaign.

But, really, that’s the subplot to what this latest installment truly stands for.

The Flames and Oilers combined for 99 wins last year and are expected by many to repeat their regular-season success again this time around.

Whether it’s that crimson red or royal blue coursing through your veins, it’s wonderful to see the two Alberta teams thriving again.

It’s what makes tonight’s encounter the can’t-miss type. With only three meetings on tap in the regular season this year, you can bet they’ll make them out.

“It’s a fine line of not letting the emotions of last year get the better of you and turning the page and moving on to a new year, new season, new rivalry,” said Milan Lucic. “(There are) new faces in the rivalry now and all that type of stuff. Regardless of the fact it is a Battle of Alberta game, a big rivalry game, game that means a lot… Both teams are expected to do well this year, so that just adds to the rivalry and should make for a really good Saturday night game.”

The Flames are coming off a 5-3 over the defending Stanley Cup champion Avalanche in their season opener on Thursday. MacKenzie Weegar had a pair of helpers, while Jonathan Huberdeau and Nazem Kadri each had one in their official Flames debuts. Brett Ritchie, Dillon Dube, Rasmus Andersson, Tyler Toffoli and Elias Lindholm supplied the goals, while Markstrom made 22 saves.

The Oilers opened up their season with a 5-3 win over the Vancouver Canucks on Wednesday. Connor McDavid recorded his 11th-career hat-trick and had points in four of Edmonton’s five goals, as the Oilers rallied from an early 3-0 deficit to stun the visitors.

Leon Draisaitl and Darnell Nurse also found the back of the net in the victory, while off-season signing Jack Campbell made 33 stops in his Oilers debut.

This is the only time this year the Flames will visit Rogers Place.

“Obviously, we played them a lot more in the playoffs last year, so they’re a good team and I think once the playoff rolls around, there’s a good chance we’ll be playing them again,” Oilers forward Zach Hyman told reporters on Friday. “We’ve got to get in there first, but it’s two really good teams going at it and it’s exciting when the Battle of Alberta has that extra meaning when it’s two teams with high expectations.

“Three times seems a little light, but we’ll make the most of it.”

Rasmus Andersson will skate in his 300th career game tonight. Andersson is coming off a career season where he tallied 46 assists over 82 games and totaled 50 points on the year. The second-round pick of the Flames played a game-high 25:06 of ice time in the season-opener on Thursday.

Stick tap to Flames Media Relations Specialist Dalton Ulrich for compiling these notes. Follow him and the Flames PR team @FlamesPR on Twitter for more.

Kadri picked up an assist and played north of 17 minutes in his Flames debut on Thursday. Now, he’ll get his first taste of the Battle of Alberta.

If there was ever a player built for this rivalry …

The 21-year-old grew up cheering for the Flames in his hometown of Bragg Creek. Having crossed the aisle as an Oilers draft pick, he’ll get to live out his dream and play in his very first Battle of Alberta tonight.

Holloway made the Oilers roster out of training camp after putting up eight goals and 22 points last year with the AHL’s Bakersfield Condors.

Milan Lucic on starting the year with a win:

“I think our preparation was really good and you saw it in the way we came out and had a really good first period. We gave ourselves a good chance to get our game going and establish the lead and take our habits and work ethic from the three practices leading into Thursday into the game. That was good to see.