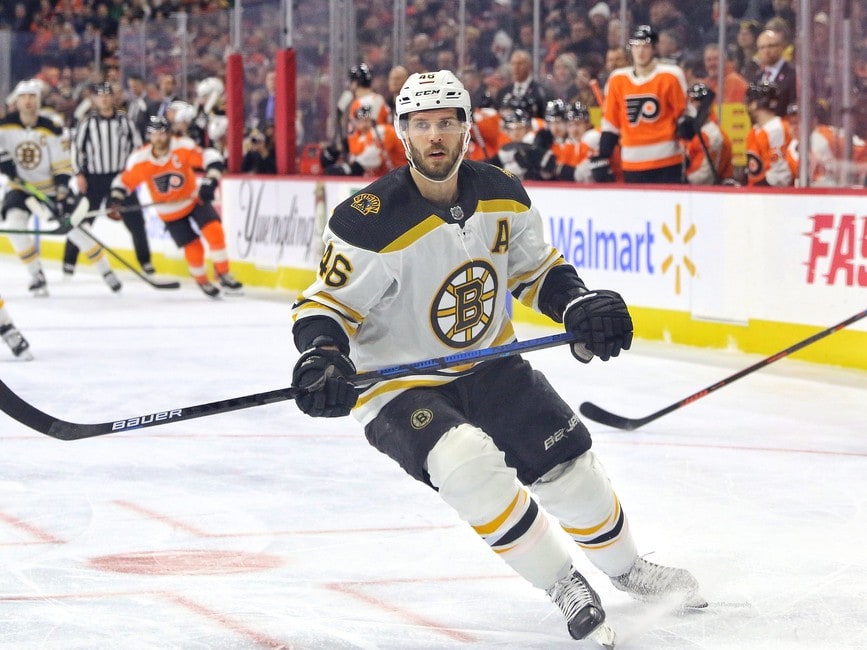 The Boston Bruins played the Carolina Hurricanes for the first time this season on Friday, Nov. 25, marking the first time they had faced each other since Carolina eliminated Boston from the first round of the 2022 NHL Playoffs. It was a game that had certainly been circled on the calendar since the schedule came out, and they could not have picked a better matchup for the annual Black Friday matinee.

Both teams came into the game off of a loss. The Bruins suffered only their third loss of the season against the Florida Panthers on Wednesday, Nov. 23. The Hurricanes had a shutout loss to the Arizona Coyotes that same night, their fourth loss in a row. Boston also came into the game on an 11-game win streak at home, tying the league record for wins at home to start the season. They needed one more win to set the record, and boy did they reach it.

The Bruins have responded to losses well so far this season. They went on a seven-game win streak after both their previous defeats this season to the Ottawa Senators and Toronto Maple Leafs. The question going into this game was whether or not they would be able to continue their great response to losses. After a slow start, though, they were able to climb back into this game, showing terrific resilience that builds confidence in this team.

Related: 4 Things Bruins Fans Should be Thankful For

As a quick side note for those keeping track of players who have left Boston, former Bruin Ondrej Kase was inactive during this game with a concussion. For those who remember, his career in Boston was derailed by concussions. This is his seventh documented concussion.

The Bruins have had one of the best penalty kills in the NHL in recent years, and for most of the young season so far, it has been a strength for the team. However, the last few games have seen the team struggle when shorthanded. It was particularly bad against the Panthers on Wednesday, when they allowed them to score three power-play goals.

In the first period, the Bruins allowed the Hurricanes to score on their first power play of the game and then again on their second power play before the end of the period. It’s the sixth game in a row that they’ve allowed at least one power-play goal and the third game in that stretch that they’ve allowed multiple goals. In contrast, in the first 15 games of the season, they held their opponents to only three power-play goals.

Part of the problem is obviously that the Bruins are taking too many penalties, giving opponents plenty of opportunities to go a man up. They had three penalties in the first period of the game alone, including a double minor on David Pastrnak for high sticking. The team is also missing one of their best penalty killers in Derek Forbort, who is week to week after breaking a finger during the Nov. 1 matchup against the Pittsburgh Penguins. They were best in the league with him in the lineup and have dropped to 20th in his absence.

It has not been a great start to the season for Craig Smith. With the majority of the Bruins’ forwards overperforming so far in 2022-23, his struggles have stuck out more than they normally would. He’s last amongst the team’s forwards with only one goal and three points in 11 games, and this game was unfortunately not a step in the right direction.

He took two penalties in the first two periods, including a bad hooking penalty that led to the goal by Jesperi Kotkaniemi in the first. When he wasn’t taking penalties, he was largely unnoticeable on the ice. He had a decent shot on goal in the first period, and that was really it. He didn’t return to the ice in the third period due to an upper-body injury. Hopefully, it is not serious and he’ll be back on the ice soon to work on getting his game moving in the right direction.

Smith is in the final year of a three-year deal, and given the Bruins’ cap situation, it was going to be a challenge to re-sign him this summer no matter what, and many are predicting he’ll get traded at some point this season. At this point, it truly may be the best option for both parties to trade him sooner rather than later, barring this isn’t a serious injury. The team needs to create some cap space to make a deal at the trade deadline and could use the spot to give an opportunity to one of the young forwards currently playing for the Providence Bruins in the American Hockey League (AHL). Smith is struggling in Jim Montgomery’s system and could use a change in environment to get rolling so he can get some decent offers during free agency next summer.

With the rough start to the game, it was the Bruins’ core that really led the way to get the team back into the game. David Krejci, of course, was the best player on the ice for Boston. His goals dug the team out of the two-goal hole they got stuck in during the first period. Charlie McAvoy brought the physical play in the second period that became a momentum shifter. Brad Marchand and Patrice Bergeron each had four shots on goal, and Pastrnak had the power-play goal in overtime to complete the comeback and win the game.

The Bruins have gotten tremendous help from their depth players throughout the early part of this season, but in this matchup, their core group really showed why they are the elite players they are. They brought this team back into a game that easily could have been a complete wash. It was not a pretty win by any means, but the guys who needed to show up did, and that’s why they were able to come out of a tough matchup with two points.

The Bruins did not come ready to play. The first period of this game was their worst period of hockey so far this season. They were sloppy, taking too many penalties, and special teams were a source of disappointment. While they got it together in the second period, thanks to terrific play by Krejci and the rest of the core, they were certainly slow in the early afternoon, post-Thanksgiving start time. With that said, everyone has known for weeks that this game would be a tough one, part of a challenging stretch ahead.

Despite the issues in this game, the Bruins are still in a great position to make the playoffs and be contenders. Thanksgiving is generally a good time to perform a “vibe check.” Teams in a playoff position at this time usually go on to make the playoffs when the regular season ends in April. But things are not about to get easier for them.

The Bruins have been the best team in the NHL through the first quarter of the season. But the next stretch of games will certainly be very telling as to how legitimate of a contender they are. Their next five games are against the Tampa Bay Lightning, Colorado Avalanche twice, Vegas Golden Knights, and Arizona Coyotes. From now until New Year’s Eve will be one of their most challenging and most important stretches in the regular season. It will be particularly difficult if Linus Ullmark, who left the third period with an injury, is out for this upcoming stretch.

The Bruins’ next game comes on Nov. 29 against the Tampa Bay Lightning. They last faced each other on Nov. 21, where the Bruins won 5-3.