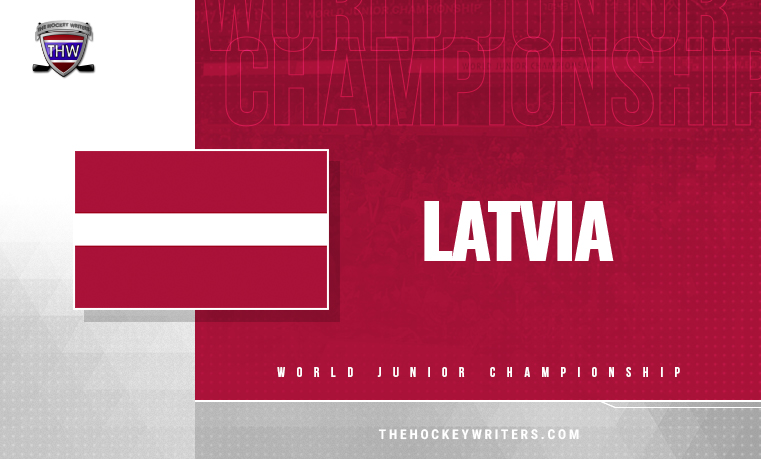 Team Latvia has bounced between various levels of junior international hockey since it joined the International Ice Hockey Federation (IIHF) in 1992. Previously, they have only been able to stay in the top tier for a maximum of two years before being relegated back down into a lower division.

However, Team Latvia is determined to break the cycle at the 2023 World Junior Championship and arrive in Canada with an ambitious squad, filled with players based in development leagues dotted across Europe and North America.

The Latvians saw their preparation derailed by airline issues and lost both of their pre-tournament games, falling 6-3 to Czechia and Germany, but could yet make an impact in Group B. They start out on Boxing Day versus Team USA, with head-to-heads against Switzerland, Finland, and Slovakia to follow.

Latvia must take points from Switzerland and/or Slovakia to stand any chance of avoiding the dreaded relegation playoff. Will they break their cycle of second year demotions? Let’s wait and see, but the players are determined to establish themselves as a permanent fixture in the top tier of the World Junior Championship.

Here is Latvia’s 25-player squad for the tournament, with an analysis of the key players at the disposal of head coach Artis Abols. There is plenty to unpack for this underdog squad, as always.

Team Latvia arrive at the Avenir Centre in Moncton with three netminders based in the United States and set to join the NCAA, all of whom are in contention to start. Patriks Berzins and Linards Lipskis are based in the North American Hockey League (NAHL) – which serves as a tier two alternative to the United States Hockey League (USHL) – and have produced impressive performances this season.

Berzins, who is committed to the University of Maine in 2023-24, boasts an impressive .921 save percentage (SV%) and 3.65 goals-against average (GAA) through 13 appearances for the Danbury Junior Hat Tricks.

Lipskis has established himself as the starter for the Bismarck Bobcats in his first season overseas, posting a .909 SV% and 2.64 GAA at the 17-game mark. He will also compete at the collegiate level next year after committing to Northern Michigan University.

Mezsargs has endured a wobbly start to life with the USHL’s Tri-City Storm. The 19-year-old holds a .874 SV% and 3.66 GAA through 14 appearances but has already confirmed his place in the NCAA with UMass-Lowell for next season.

Latvia’s defence corps features players from the Canadian Hockey League (CHL), Austrian U20s, Mestis (Finland, Division Two), and Latvian Hockey Higher League (LHHL). Niks Fenenko and Bogdans Hodass are the two blueliners who should be on your radar at this tournament.

Fenenko was named in the Quebec Major Junior Hockey League’s All-Rookie Team last season and projects as a solid defenceman at the professional level. The Riga-born defender is poised and confident on both sides of the puck, recording 58 points (10 goals, 48 assists) in his first 89 appearances for Baie-Comeau Drakkar. He will play in all situations for Team Latvia.

Hodass, who stands at 6-foot-3, is a sturdier option on the backend for Lativa. The Jelgava-born defenceman is in his second season with the Medicine Hat Tigers, for whom he has contributed 39 points (11 goals, 28 assists) in 84 appearances in the Western Hockey League.

Edgars Adrians Kazaks is another player to note on Team Latvia. The 19-year-old has seven points (two goals, five assists) in 15 appearances in the LHHL, which is the perfect preparation for a run at the World Juniors. He will play an important role for Abols, not least because he is the only right-shot defender at his disposal.

Team Latvia’s attack features three drafted prospects: Dans Locmelis of the Boston Bruins, Klavs Veinbergs of the Tampa Bay Lightning, and Sandis Vilmanis of the Florida Panthers. They are all currently un-signed and are set to use the World Junior Championship as a post-draft launchpad for their careers.

Locmelis is currently playing in Sweden’s top junior league, in which he has posted 33 points (12 goals, 21 assists) in 27 appearances as an alternate captain for Luleå HF. The Jelgava-born forward was drafted in the fourth round of the 2022 NHL Entry Draft and is committed to the University of Massachusetts for 2023-24.

Locmelis, a natural centreman, is a confident contributor on the rush, with his powerful skating and eye for a pass often making the difference for his team. He has been a member of Luleå since his age-15 season, significantly boosting his development in the process.

Vilmanis will also slide into a top-six role for Team Latvia, with his 24 points (11 goals, 13 assists) for the Sarnia Sting in the Ontario Hockey League underscoring his offensive potential. The former fifth round pick is adept at using his 6-foot-1 frame to protect the puck and has a powerful wrist shot to match. He is also a product of Luleå’s fabled youth system.

Veinbergs, a seventh-round pick of the Lightning, is midway through his first season with the USHL’s Lincoln Stars, for whom he has recorded 14 points (six goals, eight assists) in 20 appearances.

Looking Ahead for Team Latvia

While it will be difficult for Team Latvia to break their sequence of second season relegations, their squad is resilient and determined to break the habit of a lifetime. Abols will instruct his squad to play team-first, defensively-solid hockey. Soon, we’ll find out if it does the trick.

Luke is an award-winning freelance sports journalist from London, England. In addition to his work on the Washington Capitals and Ottawa Senators for THW, he covers the Elite Ice Hockey League for British Ice Hockey and world soccer for numerous publications, including on Substack. To stay up to date with his content, follow @LukeJames_32 on Twitter.