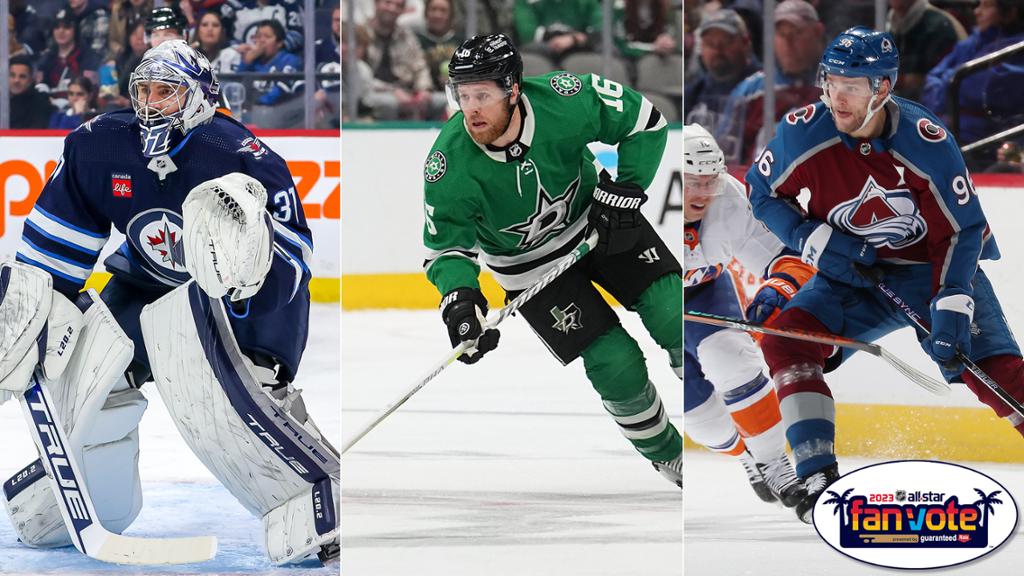 The fan vote will result in two skaters and a goalie being added to the rosters for each division for the 2023 NHL Honda All-Star Game at FLA Live Arena in Sunrise, Florida on Feb. 4 (3 p.m. ET; ABC, ESPN+, CBC, SN, TVAS).

The first eight players per division were selected by the NHL hockey operations department and announced Jan. 5.

While fans ponder their selections, NHL.com writers are providing and debating their picks for one player they would add. Today, our writers debate their picks for the Central Division.

In a format that puts a priority on playmaking, the Central Division would do well to have the services of Connor, who is becoming a force in that category. He’s on pace to crush his NHL season-high in assists, set last season with 46, and set a new personal-best for points, also set last season (93). The thought of the forward flying around the ice with, say, Kirill Kaprizov of the Minnesota Wild and Jason Robertson of the Dallas Stars would cause agita for any opposing goalie, and give the defending Lady Byng Trophy winner, voted as the player best exhibiting sportsmanship and gentlemanly conduct, a deserved spot on the All-Star stage. — Barry Rubinstein, manager, assignments

With zero disrespect to Juuse Saros of the Nashville Predators, it does feel like a disservice to Hellebuyck to make him have to sweat this out (he probably isn’t sweating too much) in a fan vote considering the season he’s having. Now, I get why this is the case. Hockey operations, in selecting the first eight players — seven skaters and a goalie — from each team to be on the All-Star rosters in each division had to pick one player per team. Josh Morrissey (Norrissey?) is the absolute slam dunk top candidate from the Jets. But Hellebuyck is a close second and he should be a part of this weekend. He’s been the best goalie in the Western Conference and I would say second in the NHL behind Linus Ullmark of the Boston Bruins. The Jets would be nowhere near the top of the Central Division standings without Hellebuyck’s dominance this season. He plays a lot. He faces a lot of shots. He lets in very few goals. You can’t ask for much more than that from a goalie. So I get it, Morrissey had to be the Jets top candidate, but Hellebuyck belongs in Florida for All-Star Weekend. He’s earned it. Don’t make him sweat. — Dan Rosen, senior writer

There’s something to be said about the veteran who’s still playing a big part of a team’s success. For that reason, Pavelski would get my vote to go to the NHL All-Star Game. The 38-year-old once again is a key part of the Stars’ top line with Roope Hintz and Jason Robertson, who already has been selected to play for the Central Division at the All-Star Game. Pavelski led the Stars in scoring last season with 81 points (27 goals, 54 assists) and he’s among their top scorers again this season. Steady and reliable with more than his share of tipped goals in his career, Pavelski continues to be a great player in the NHL. He should be rewarded with an All-Star appearance. — Tracey Myers, staff writer

Rantanen should join defenseman Cale Makar and represent the Avalanche at the All-Star Game. The 26-year-old forward ranks among the top scorers in the NHL season this season after playing a key role in the Avalanche’s Stanley Cup championship last season. In 2021-22 he led Colorado with 92 points (36 goals, 56 assists) in 75 games, then in the 2022 Stanley Cup Playoffs his 25 points (five goals, 20 assists) in 20 games were second on the Avalanche to Makar (29 points). Rantanen played in the 2019 NHL All-Star Game in San Jose, but often he has been overshadowed by Makar, center Nathan MacKinnon and forward Gabriel Landeskog. He deserves more recognition. The champions deserve more than one player in this event. And who wouldn’t want to see Rantanen and Makar together in a 3-on-3 tournament? — Nicholas J. Cotsonika, columnist

There are players with better statistics, but few bring the complete package to NHL All-Star Weekend that Zuccarello would. Let’s start with the simple fact that he is All-Star worthy as a point-per-game forward again this season for the Wild. Beyond the numbers, though, Zuccarello has a certain flair to him. Zuccarello is a performer, one who would dazzle no matter which skills competition he takes part in, not to mention darting all over the ice during the 3-on-3 games. He also brings a smile to the faces of peers and fans alike with his buoyant personality, and he’s a joy to watch and be around. Quite simply, Zuccarello embodies everything this fun, feel-good NHL All-Star Weekend is about. — Jim Cerny, managing editor